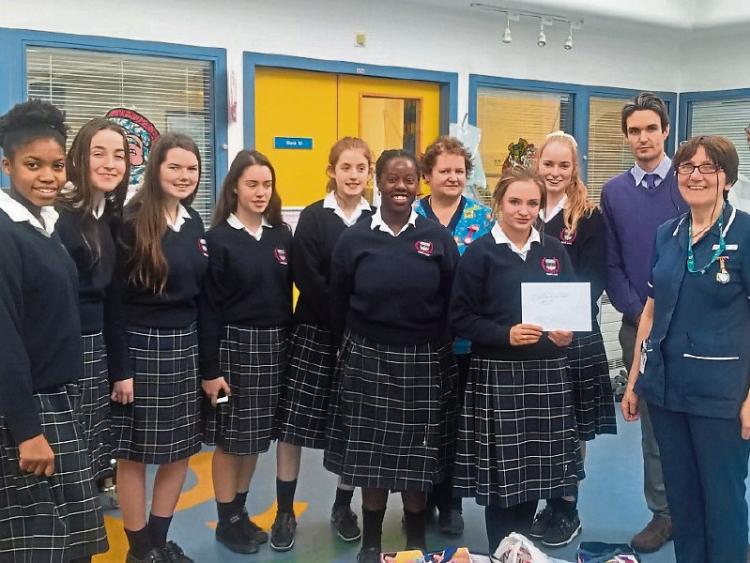 The young patients in the Paediatric unit of Portlaoise Hospital got some special Christmas gifts this year from the girls of Scoil Chriost Ri, Portlaoise.

Gifts, books and a handsome cheque were presented by third year CSPE students to staff at the unit before Christmas, after they raised money in the school.

Student Rebecca Deevy was one of the students.

“We decided to raise funds as part of our action project for the young children in the Paediatric unit at Portlaoise hospital. We felt that along with a cash donation it would also be beneficial for our project if some of our class visited the hospital bringing some toys and treats,” she said.

“We formed committees with different management roles in our project.We held a bake sale in school that our entire class was involved in,” explained student Kate McDonald.

“It was a real success thanks to Ivory Event Management who came to the school in October to create a breath taking Halloween display where we showcased lots of goodies,” she said.

That bake sale sold out in less than thirty minutes, and brought in €613.

“We were incredibly grateful for everyone’s help and thrilled that our action would make a real difference,” said a delighted Rebecca.

The class's excitement grew as their Christmas visit to the hospital neared, with the lucky few chosen out of a hat by their teacher James Duffy.

“We received a wonderful welcome from two extremely kind nurses. We gave small Christmas treats to each child in the paediatric unit and left some toys and books for the hospital playroom,” said Kate.

The students also presented their cheque to the paediatric staff.

“We were excited to hear it would go towards an upcoming art project,” said Rebecca.

“We were very proud of the work we did and felt a great sense of achievement in giving something back to the community. If a group of people come together and participate in making an active contribution it can bring happiness to other people’s lives and Christmas should be a happy time for everybody,” Kate said, speaking on behalf of her form 3D.

CSPE teacher James Duffy is proud of the effort his students put in, all as part of their CSPE action project..

“They raised a substantial amount of money and were very focused in making a difference in their local community,” he said.