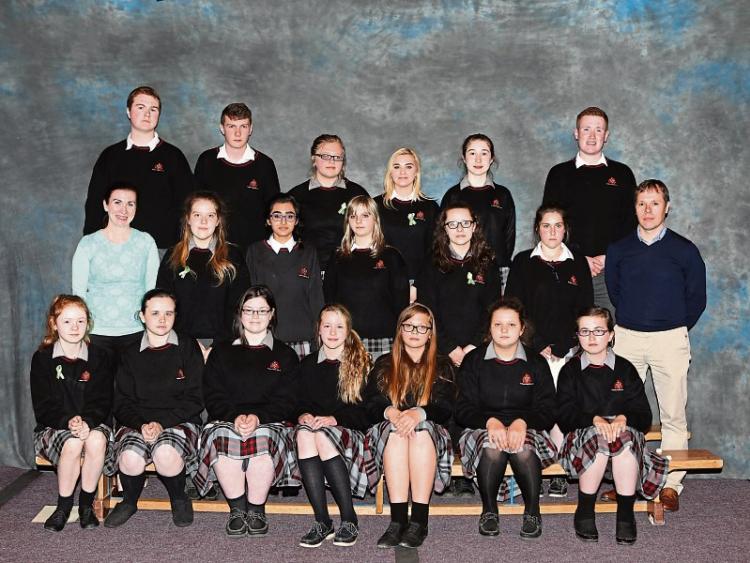 Environmentally aware students in Roscrea have found low levels of energy conservation in their community, and are offering advice to housesholders.

A group of students in Coláiste Phobal Ros Cré are in the Green Schools Committee and also Roscrea Junior Tidy Towns. They recently carried out door to door surveys in their local areas, on Community Waste Minimisation Survey.

Their aim was to assess awareness and attitudes on recycling, composting, rainwater harvesting, energy usage at home and types of transport used every day.

Their findings showed that improvement is needed, particularly in energy use, with 48% of respondents saying they filled the kettle for one cup of tea, and 31% using the washing machine or dishwasher when half full.

Three quarters turned off the tap while brushing their teeth, and the same figure turned off lights when leaving a room.

Only 59% have a lagging jacket on their hot water tank, while 72% of respondents said they use energy saving light bulbs.

Almost half of householders surveyed use a car for short journeys under a mile, and 70% drive instead of using public transport.

Recycling levels were higher, with 85% of households doing some form of recycling at home, and 83% know where their recycling centre is located, though 41% did not use it.

Half did some level of composting. Nearly half agreed to try and buy products with less packaging, and 78% of respondents agreed they could do more to reduce waste in the community.

The committee is now aiming to raise awareness of the benefits, both environmental and financial, of taking small steps to change habits and have a positive impact on the environment.

Their tips include bringing a list when shopping and sticking to it, bringing re-usable bags for all shopping, not just groceries, buying rechargeable batteries, composting fruit and vegetable peelings at home, and when buying electrical goods, bring the old goods to the retailer.

Householders told them that they want more public bins and bottle banks and a recycling collection service for people unable to get to local facilities.

The green schools/junior tidy towns committee has won several accolades, raising their water flag this year and winning the Green Schools Water School of the year 2016 for the Southern Region. They received commendation in the national Tidy Towns Competition 2016 Adjudication Report

They are now working on their fourth green flag for travel, with the survey's findings to be used.

The students also recently accepted a Youth Development Award from Roscrea Enhancement Committee for their contribution to the Roscrea Tidy Towns 1916 Community Garden of Remembrance.