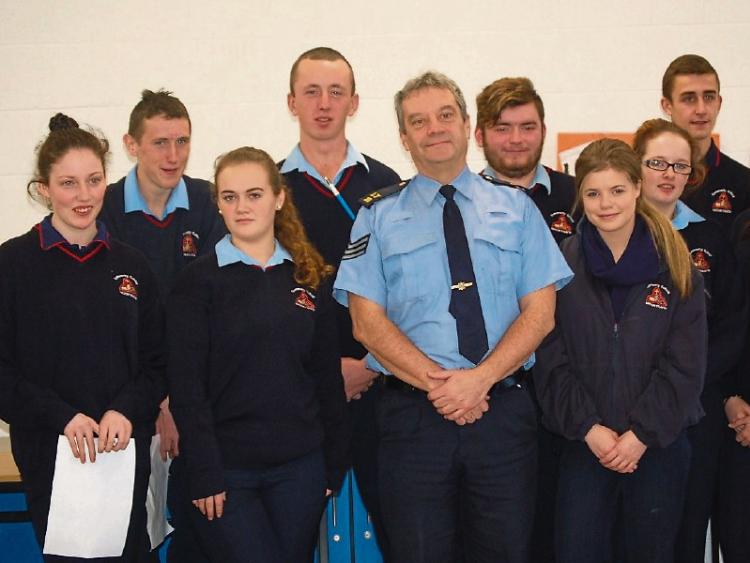 The serious subject of missing people in Ireland made for a fascinating talk for sixth year Mountrath Community School Leaving Cert Applied students.

Garda John Barry from Portlaoise Garda Station came to the school recently to give a presentation about Missing Persons in Ireland.

The students chose to lresearch the topic as part of their Contemporary Issues Task in Social Education.

“The class had been researching Missing Persons for some weeks having chosen from a number of contemporary issues after much debate. They all agreed that it was very interesting, especially given that a number of well-known cases in Ireland had occurred in the Midlands region in recent years,” said their teacher

“Garda Barry told us that approximately one person goes missing every hour in the world and the main cause of this is human trafficking,” said student Ruth Delaney.

The group heard the sad fact that children as young as 14 are exported to other countries to work for no pay or to be used in the sex industry. They are reported missing because once they enter the country, all their belongings and passports are taken, stripping away their identities. They are filed as missing by the Gardaí.

In 2014, approximately 9179 persons went missing in Ireland. Approximately 70% were men and 30% women. Over half were foreign nationalities, aged 22 years or under, with about 60% being under 18 years old.

“He told us that interviewing a person reporting that someone has gone missing can be hard because they are very stressed, confused and emotional. You must try get as much information as possible so by talking to someone calmly they slowly start to match your tone of voice,” said Ruth.

The students heard what information the Gardaí seek when a person goes missing.

That includes, where they were last seen, their age, description, clothes, information found online, what relationship they had with the person reporting the disappearance, who they were last with, and if they ran away before. Support can be called in for a search, like helicopters which can pick up light from a phonescreen or a body temperature.

“It was really helpful and informative, we thank Garda Barry and An Garda Síochana for taking the time to visit us and help with our research,” said Ruth.