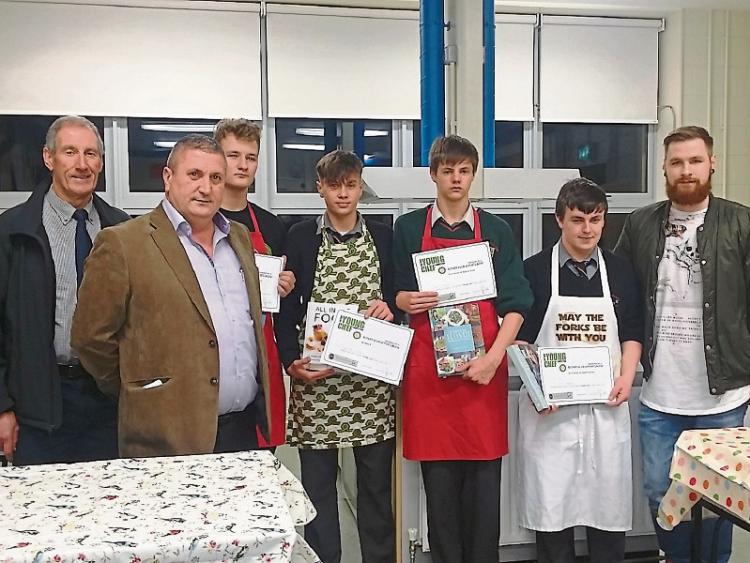 The new Laois Rotary Club Young Chef, chosen after a tense cooking competition in the kitchens of St Mary's CBS Portlaoise, has gone on to be chosen in the Regional event in Athlone, ready for the Irish final later this month.

Szymon Struk, a 5th year from St Mary's CBS, had competed against three others in the Laois final in January; Conor Whelan also from CBS, and Portlaoise College students Kamil Kowerczuk and Vitalij Sidorov.

All had to produce a tasty healthy meal within two hours, under budget. Szymon chose to do chicken skewers with satay sauce, followed by crispy salmon with potato mash, and chocolate fondant for dessert.

“I am happy to represent my school and Laois in the final. I love cooking and I would like to be a chef when I grow up,” he said.

The competition is difficult.

“It's hard to cook in a strange kitchen, but I have got good advice from the Laois chefs who were judges,” he said, also thanking his teacher Ms Murphy.

His school is proud of both competitors.

“Well done to Conor and Szymon. Both lads did really well on the night, and Szymon won the competition, beating off competition from Portlaoise College. A special mention to their teacher, Ms Murphy, who prepared them for the competition,” the principal Maura Murphy said.

The judges were Adrian Rusan, Head Chef at Batoni's, Gate Lodge Emo, and Gearoid Phelan, Head Chef at Seasons Restaurant and also of Ballyfin House Hotel, who were impressed at the standard, and gave each student valuable feedback.

Each student was presented with a prize of a celebrity chef cookbook and certificate of participation.

“Congratulations to Szymon and the best of luck at the Final. A huge thank you to CBS Portlaoise for hosting the competition this year,” said Fintan Monahan, president of Portlaoise Rotary Club.