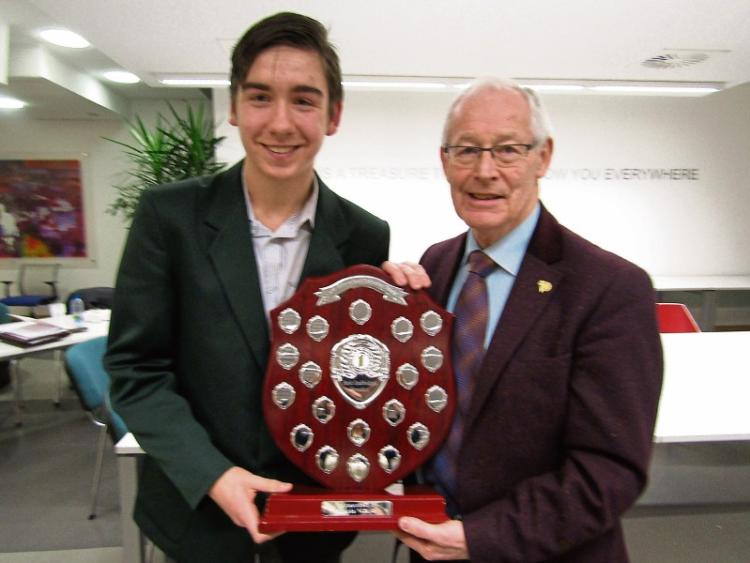 Passionate arguments were heard from eloquant Laois teenagers, at the final of the Laois Inter-School Debating Cup last Monday January 30 in Mountmellick Library.

It was an exciting end to a speaking competition that began in September.

Chairperson, Padraig Boland, introduced the senior students and invited them to speak up for teenagers, which they did in a spirited display, titled ‘An Apologia for the Irish Teenager.’

Judges Mary White, Louis Brennan and PJ Phelan praised the “extraordinary talent” of the winners and the high standard of all students.

Debate finalists Scoil Chriost Ri and Heywood Community School debated that ‘In a democracy, there is no justification for breaking the law, with Heywood defeating the motion with strength to win the Laois Inter-School Debate Cup.

Civil disobedience, Aoife argued, can have unintended consequences and can be manipulated to destabilise democracy.

Emma said citizenship required participation, but also obedience, with “no such thing as a victimless crime”.

“People often believe they are right, like water charge protesters who jostled Gardai, and trapped the Tanaiste in her car, and like Isis. Trust in the law is the best compass, not vigilante logic,” Grace argued.

The Heywood team, Ruth Bergin Captain, Ellen McWey, Kasia Wolska and Arianna Mezzepelle opposed the motion with conviction, arguing that democracy does not guarantee that all law is fair.

“Trump will not make the same kind of laws that Roosevelt did, laws are made by people and therefore fallible. Nano Nagle herself broke the law by educating Catholic children, ‘a little wrong to do a great right',” argued Ruth, quoting Martin Luther King who said that an individual who breaks an unjust law to arouse conscience in the community, is showing true respect for law.

Ellen reminded of the consequences of mechanical obedience to law in Nazi Germany. It was civil disobedience which won civil rights. Ariana pointed out that when Rosa Parks broke segregation law in Alabama, she said “I was just trying to let them know how I felt about being treated as a human.” Kasia pointed out that laws are broken every day without endangering democracy. “Congratulations to Heywood and all the winners, and many thanks to Breda O’Connell, Mountmellick Library, for hosting this special event,” organiser Siobhan Holland said afterwards.