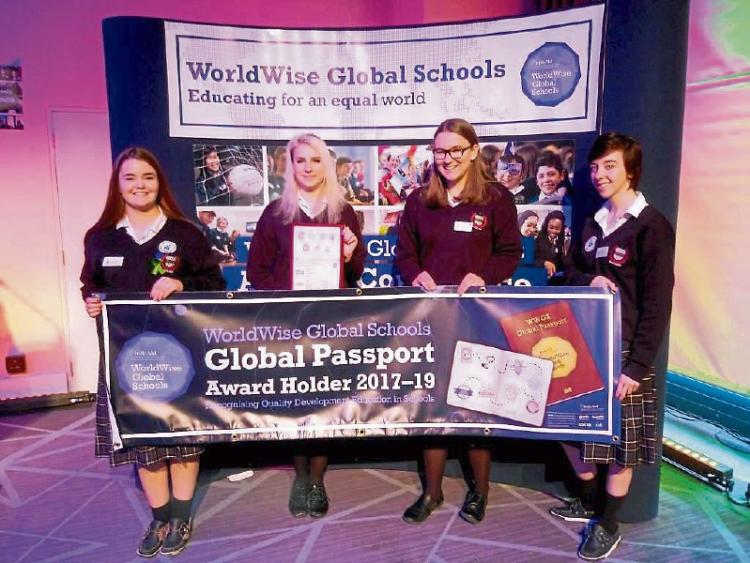 The 5th and 6th years at Scoil Chriost Rí Portlaoise have achieved their first Global Passport Award, for raising awareness in school about the developing world.

They won the Citizen Passport, stage one of three quality mark awards given by Worldwise Global Schools, aimed at promoting Development Education in secondary schools, funded by Irish Aid.

“The girls have been learning about global issues like child labour, climate change and the Syrian refugee crisis. The aim is to link teachers across subjects to teach Development Education. Students should be aware of what is going on in the world, and what they can do to affect change,” she told the Leinster Express.

For their Citizen Passport, 6th years watched the Netflix documentary 'True Cost' about how cheap clothes are manufactured.

“They were shocked at how unregulated factories are, and realised they should try push governments to set better laws, and how lucky we are in Ireland,” she said.

Another documentary 'Living on a Dollar' told of US students who went to live and work on a local wage in a developing country.

“It really moved them,” their teacher said.

Religion students in 5B created a Powerpoint presentation which was then shown to the whole school of almost 1,000 girls, to explain DE. They also made a visual display board.

Most successful was a non uniform day last December.

“The girls wanted to make a real difference, to pay Concern to build a classroom, which costs €1,000. We designed and ordered pink pencils with 'I helped Concern build a classroom' to give in exchange for donations, and they raised €1,583 in a day,” Ms Byrne said.

“The students drove it on, they really wanted to help, and they realised they can make a difference. It worked really well,” said Ms Byrne.

She plans to go for the next level of award next year, the Diplomatic Passport.

“We have a grant, I hope to link with subjects like debating, CSPE and geography,” she said.