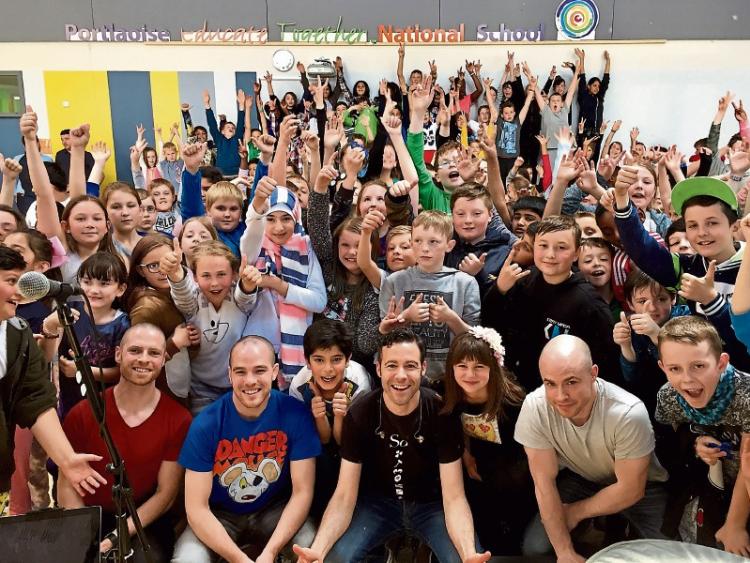 Portlaoise primary schools became 'Schools of Rock' last week, when local band Transmitter went on a a tour of them.

Transmitter's tour kicked off with two gigs at the Holy Family Senior School on May 4, adapting their tunes to the delighted young audience with hits from Ed Sheeran to AC/DC.

The children each made a donation towards No Limits activity centre for children of all abilities in Portlaoise, with €1100 raised.

"I was absolutely delighted to be a part of something so vibrant, so energetic and so much fun. Stewart and the boys in Transmitter gave us a lift and buzz that carries us not only that day but well into the future. Well done to everyone,” he said.

The next day it was Portlaoise Educate Together.

“Transmitter didn't disappoint with an electric atmosphere in the school halla it was hard not to dance and jump around,” said Pam Grogan from the Parents Association.

“The children were ecstatic and for most of them it was their first ever experience of a live gig,” she said.

Live music streams on the school's Facebook page were shared with the parents and local community.

The children donated over €200 toward music equipment for their school.

Transmitter performed two separate music gigs at the school, and also provided a quieter disco for the children in Le Cheile autism unit.

“It was a day most of the children will never forget, the band have created fans for life with their autographs being requested. The parents association and the principal Sinead Ahern are incredibly grateful for the generosity of the lads time,” said Siobhan Mannion also from the PETNS Parents Association.

The Portlaoise band still had energy to perform for the grownups at their weekend gig in a Portlaoise pub, and last Tuesday they ended their 'school tour' with a day of gigs in the Dunamaise Arts Centre, for Scoil Bhride Knockmay, the Holy Family Junior School, and St Francis School, with donations in aid of the arts centre.

Lead singer Stewart Quinn said the hectic week of moving their gear from place to place was all worth it.

“We had a great reaction everywhere, we wanted it to be as inclusive as possible, to show children that they can make a difference, and to bring them to the Dunamaise Theatre to show it is for all the community. I hope we achieved that,” he said, thanking the schools and the theatre for their support.