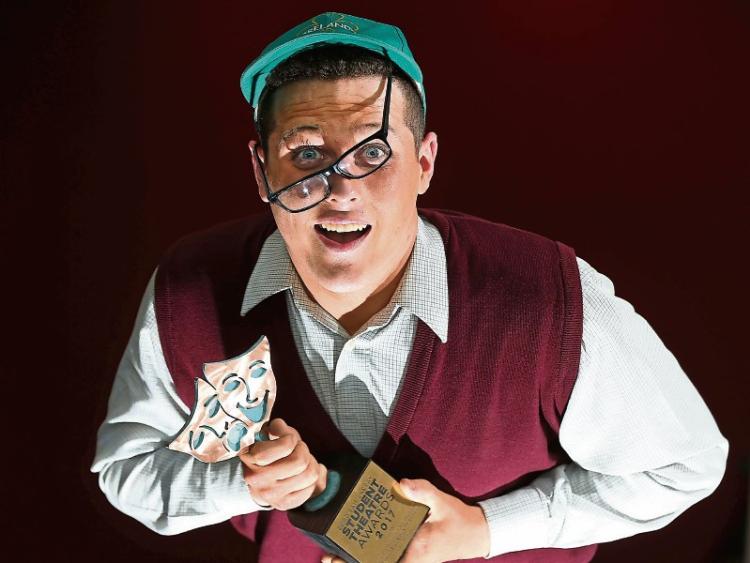 Heywood Community School is “over the moon” after the lead actor in their school musical was voted 'Best Male Performance in a Leading Role' at the prestigious Bord Gais Energy Student Theatre Awards.

“I was over the moon, it was really a dream come true,” said Liam, a member of Raheen Panto.

His twin Eamonn also starred in the musical, but both are back to reality studying for the leaving cert. Liam hopes to keep acting.

“I'll probably do a degree in business for security but I hope to do acting in college,” he said.

He thanked teacher Niall Mulpeter, who was Director and Musical Director.

“He was fantastic, he gave up a lot of his free time to help us. The whole cast was such a tightknit group,” he said.

The play itself was also shortlisted for ‘Best Musical’ at the 'Oscar' style ceremony in Bord Gáis Energy Theatre, and Heywood was one of just four finalists chosen to perform a piece on stage.

“To be able to perform was enough, winning was just amazing,” said Liam.

Supporting him and his co-performers were his family, Mr Mulpeter, deputy principal Peter Malone who was producer, art teacher Ms Webster who did set design, as well as 29 students.

"It is a wonderful achievement for all the students involved. Getting shortlisted for best overall show was fantastic. The Heywood students who performed on stage lifted the roof of the Bord Gais. Liam's win is a testament to his talent and hard work, and was well deserved,” said Mr Mulpeter.

There was stiff competition for the awards, with Heywood up against other schools that hired in professionals to run their shows.

Liam was presented with his prize by one of the judges, actress Amy Huberman.

He then went on to perform a piece from their musical at the huge event, hosted by RTÉ 2FM presenter Eoghan McDermott.

“Liam did 'Skid Row' and it was a flawless performance, proving him a worthy winner. It was a magical, immense day,” said Mr Mulpeter.

Over 1,700 primary and secondary school students representing 63 Irish schools at the event were also treated to a surprise performance by The Strypes.

The Awards are aimed at recognising and rewarding participation in the dramatic arts in schools around Ireland.

“Congratulations to all of our winners and to everyone who entered this year’s awards – the talent, creativity and enthusiasm shown by students, teachers and parents is exceptional,” he said.