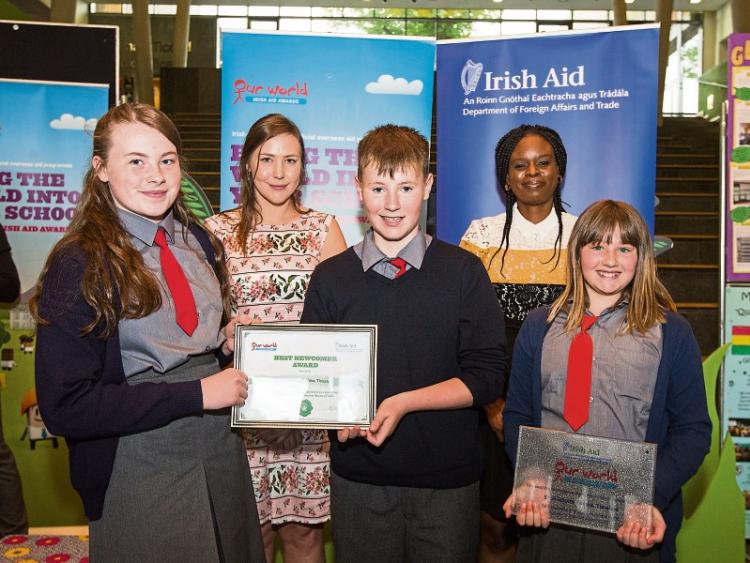 A specially printed school newspaper, 'The Timahoe Times' has won two awards for Scoil Mhuire Fatima NS in Laois, at the ‘Our World Irish Aid Awards 2017’.

In their first time to enter the competition, the school won the “Excellence in Global Awareness" and "Best Newcomer" awards.

Teacher Michael McEvoy and 6th class were presented with their awards at the South West / Midlands region award ceremony in Limerick recently, out of 170 entrants.

"It was a great honour for the school to pick up two awards. The children put a huge amount of work into the project and it was great to have that recognised in this way,” said Mr McEvoy.

Their 12 page paper had reports, photos, fun facts and a sports section, on Irish Aid’s eight partner countries and the lives of children there.

The competition is aimed at promoting awareness of issues in the developing world. Schoolchildren are asked to explore the work being done by Irish Aid, compare their lives with children in those countries, and inform their communities on Irish Aid.

Copies of The Timahoe Times had been distributed locally, and even sent to President Michael D Higgins, while Foreign Affairs Minister Charlie Flannagan took it to the Dáil where Taoiseach Enda Kenny and Ministers Leo Varadkar and Richard Bruton enjoyed a good read.