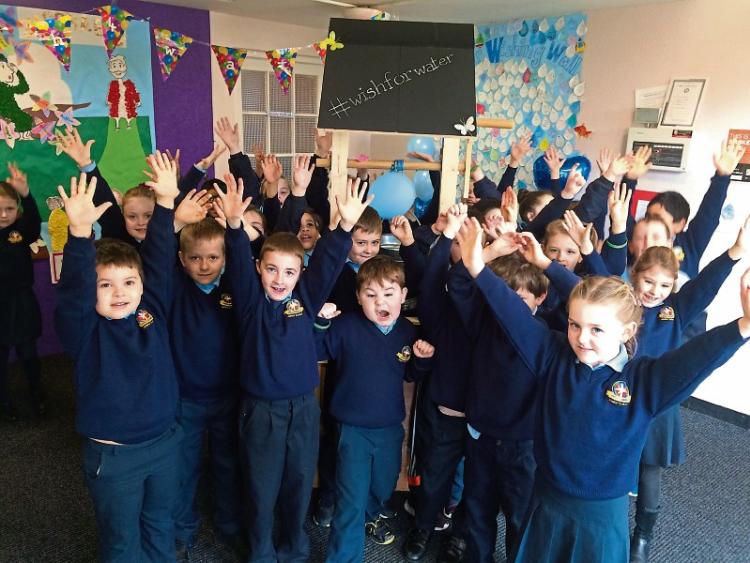 Pupils at Holy Family Junior School in Portlaoise have made wishes come true, by ensuring clean drinking water for communities in the developing world.

First Class took on a special water project this year, and with the support of the whole school, have managed to raise over €600, enough to buy four water pumps for villages and a school in Africa.

The children first set about finding out how important clean water is.

They came up with lots of questions about its uses and how it can be conserved, and then they had to try and find the answers.

“As they researched, they discovered that even though every person, plant and creature needs water to survive, not everybody has enough clean water,” said their teacher Laura Moloney.

The children watched a video about Benjamin, a child in Africa, who had to walk miles every day to fetch water from dangerous wells. Along with his friends, he could not go to school and wished that they could have clean water.

The children were very touched, and then came up with a bright idea to help made that a reality, a Wishing Well day in the school.

They hoped to raise enough money to buy a water pump for a village in Africa like Benjamin’s.

The school caretaker, Brendan Hooban, built a well for them with a real moving bucket and a slate roof.

The children explained their idea to the whole school and invited every child to make a wish in our wishing well on World Water Day.

The day was a great success.

“ We raised over €600. We were able to buy not one, but three water pumps from Concern and we gave €354 to Sr Anne McDermott for the Presentation Sisters working in Zambia.

It will be used to build a water pump in a new school in Kaoma,” said their teacher.

The class also made an animated movie to tell people what they had learned and how they tried to help.

“A big thank you to all the people who helped us and all the children who made a wish in our well. We called our movie #wishforwater, because we really did #wishforwater,” said a delighted Ms Moloney.

The project was done as part of the Challenge to Change awareness and development programme run by the Presentation Education Office.

Ms Moloney is proud of her pupils' efforts.

“I was really impressed by the children's enthusiasm and their need to help other children,” she said.

“Even looking at the wishes that they made, it was touching how many of them wished not for things for themselves but for water for other children,” she said.

“They really got into the spirit of the project and are very proud, they love telling people about everything they learned and did,” she said.