Laois student chosen as a national Cycle Against Suicide leader 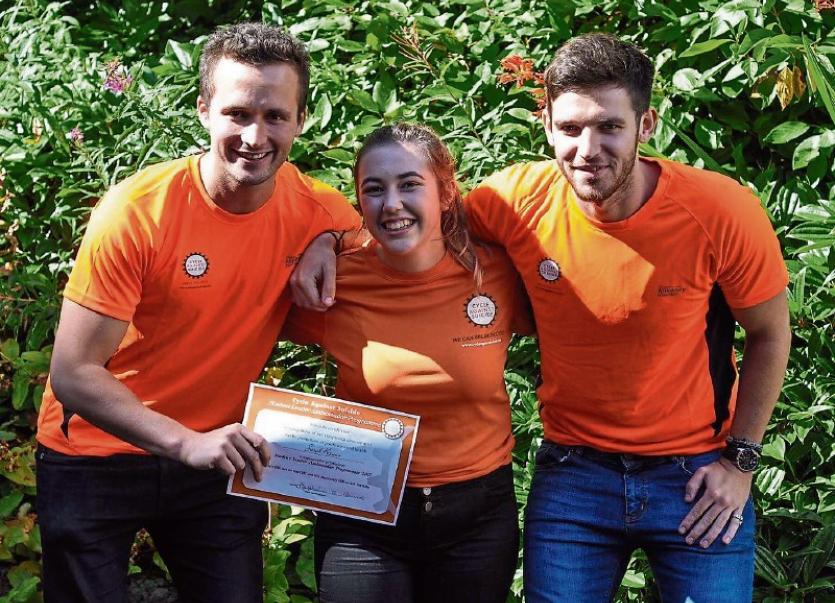 A Portarlington student has been chosen as one of just 13 national student leader ambassadors for Cycle Against Suicide.

Now fifth year student Sarah Keenan has been selected from over two hundred nominees throughout Ireland to be one of thirteen national student leader ambassadors for CAS.

Sarah's written essay won her the role, and she was recently awarded her certificate at a retreat in Kippure estate.

“Colaiste Iosagain works extremely hard in promoting the message that 'its OK not to feel OK and its absolutely OK to ask for help' so for me, its a huge honour to get to represent the school at national level and for the school to be recognized for its efforts,” she told the Leinster Express.

She paid tribute to the Cycle Against suicide teacher at her school, Ms Nolan.

“She is excellent at motivating students to really go out and live by the message," Sarah said.

”It is key in today's society, that people do realize that there is always someone to talk to, whether that be a family member, a friend or a teacher, and to never be afraid to ask for help,” she said.

As part of her induction she went on a two day retreat to Kippure to participate in rock climbing and other outdoor pursuits along with talks in the evenings.

A workshop with Kayleigh Cullinane from Operation Transformation was one of the most memorable of those talks.

Sarah is excited to implement ideas in the year ahead.

“My plans are to assist in anyway that i can in the school, especially with our schools 'Wellness Week'. I would hope to bring new ideas to the school that I learned at the retreat. I also plan to help out the organisation this year and I will of course be a part of the national congress along with my fellow Student Leader Ambassadors,” she said.

The Cycle Against Suicide group in Coláiste Iosagáin organise an annual Wellness Week, with last years theme being 'Share the Journey' .

Activities included painting orange footsteps around the school with positive messages, making a short film and putting up posters.

A 'Tree of Positivity' had students' wishes for the future attached while the 'Pack Your Parachute' initiative made students aware of their circle of support such as parents and teachers.

CAS holds an annual cycle around Ireland, to promote mental health supports, among other activities.