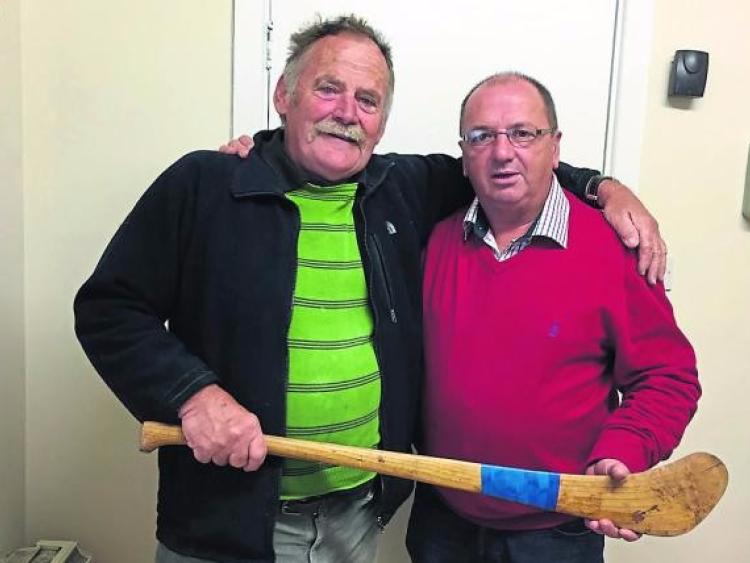 Noel Byrne (right) son of Mickey 'The Rattler' Byrne, pictured with Tom Burnell and the hurley Rattler gave him as a ten year old boy.

A hurley presented to a ten year old boy at The Niagra Falls in Canada by Tipperary captain Mickey 'Rattler' Byrne in 1958, has found its way much closer to home and is still the prize possession of Tom Burnell, now living in Abbeyleix.

Tom and his family moved to Toronto in Canada in 1948 when emigration from Ireland was at a high.

Ten years later in 1958, his father brought all the family to meet the Tipperary team who were league winners in 1957 and captained by the legendary Sarsfields man 'The Rattler'.

The Tipperary team were visiting Niagra Falls as part of their trip and this man, John Burnell only ten years old at the time, got to meet the Rattler who presented him with his autographed hurley.

“He has kept the hurley all his life and has brought it with him all over the world. He even used it to play ice hockey as a teenager.

"When he recently moved back to Abbeyleix after all those years being away, he discovered I was working in the Abbeyleix area and set out to meet me to show me the hurley and tell me the story.

However, Noel jokingly confessed to doubting the authenticity of the hurley due the absence of any traces of blood on the ash! The Rattlers hurley's often had red splashes and the blood was rarely his own!

The impact the act of kindness on the part of The Rattler had on the ten year old boy has only grown with the passing of time.

To have an autographed hurley really is a prized possession and Tom has looked after that hurley with great care and attention through the years.

The blue colours of the Rattlers club, Thurles Sarsfields, with whom he won a record fourteen county senior hurling titles, is still evident on the stick.

A great tale, Noel Byrne was amazed when he received the word that his Dads hurley was now in Abbeyleix and was delighted to see it and get to hold it again.