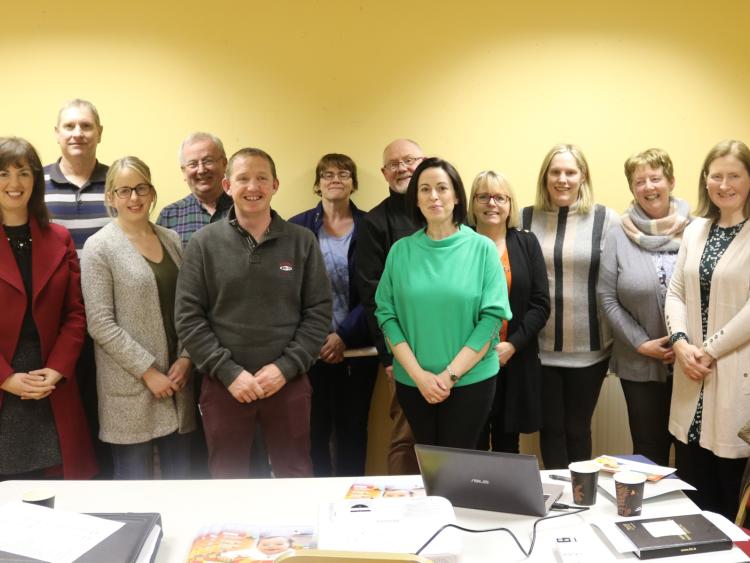 Committee and members of Down Syndrome Ireland Laois branch at their AGM in Gort na nÓir centre in Abbeyleix.

Exciting times are ahead for the Down Syndrome Ireland Laois branch, including a Field of Dreams employment training centre in Abbeyleix for adults with intellectual disabilities.

The committee and members gathered in their Family Centre at Gort Na nOir Abbeyleix for their AGM recently to hear a review of activities as well as future plans.

The chairperson Margaret Miron gave an overview of the previous year and thanked the whole committee for all their hard work.
She said that the branch provides a huge amount of heavily rebated therapies and supports to its members over the years.
She gave a review of excitingplans for the coming year that include holiday time camps and parties, their Santa Train and talks for members.

For fundraising they will have church gate collections and their annual tractor run in Ballacolla.

There was praise for young adult members Maryclare Shaughnessy and Emer Sinnott who were congratulated on their undertaking training with Alphaparf as hairdressers. The women will receive training at hairdressers in Abbeyleix and Mountmellick. The adult training was organised as part of Down Syndrome Ireland's national office which is focusing on adult employment training.
“It also proves the value of being part of the Down Syndrome Ireland organisation of 26 branches around the country,” said Ms Miron.

The PRO Michael Gorman gave an overview of their Field of Dreams.
A four acre site in Abbeyleix has been leased from Laois County Council, and it will be developed in the coming years. The branch will focus on fundraising for it this year.
“The families are very excited about these plans which will help to deliver our Cradle to Grave philosophy, adopted by the branch some years ago,” Mr Gorman said.

The secretary Myra Drennan was congratulated on her hard work, and treasurer Michael Greene produced an excellent set of yearly accounts.

A new committee was elected by all members present. Two committee members stepped down due to other commitments, while they hope to be available when needed.