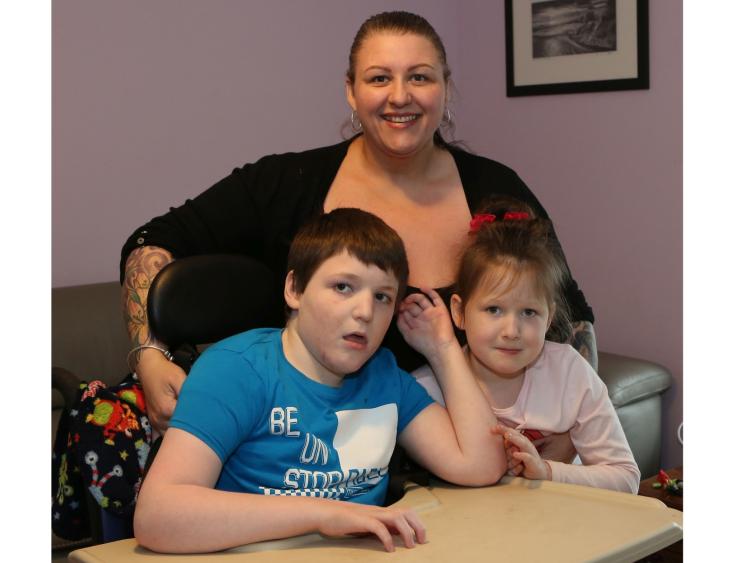 The 2019 Laois Carer of the Year has been awarded to an extraordinary mother whose three children all have special needs.

Louise Marie Dermody from Cill Beg Manor, Stradbally was stunned last week to discover she had won the Laois Carer of the Year award.
“I had no idea I had even been nominated. I was totally shocked. My friend Sarah Reid nominated me, she had been a carer for the children but hadn’t been with us for a year. I was totally blown away that I had won it,” she said.

Her children are Ethan, 11, who has cerebral palsy and epilepsy, Kyle, 9, who has autism and is non-verbal and Alanna, 7, who is also autistic and non-verbal.

Louise is separated and when the children are not at Kolbe Special School in Portlaoise, she is caring for them around the clock.
She praised the staff at Kolbe.
“They are amazing, they make sure each child has their individual needs met. Kyle goes horseriding and swimming and walking in the forest, it’s really starting to bring them out of themselves,” she said.

“When they are in school generally I am running around with appointments. Ethan has a lot. On a typical week three of the five days they have appointments,” she said.

After school they children watch some television and play. The bedtime routine starts at 6pm for bed at 8pm. However the children have extra needs that make it far from a standard daily routine.
“Ethan needs one on one care. He is in a wheelchair and I have to feed him, dress and wash him, use a hoist and change his nappies. The other children can’t understand when I can’t give them attention so they have meltdowns. Alanna would have a meltdown most days, she bites herself. She wants me to sit in her room and play with her. She has no patience,” Louise said.

Louise gets home care help from 8 to 9am and again from 3 to 5pm.
“It’s brilliant now. Before that it was so stressful,” she said.

From 5pm however she is on her own and housebound with the children.
“It’s tough. Being separated does make it harder. When the carers leave I am housebound until the next day. I don’t get out. Being a carer in general is isolating. Particularly when I see my friends with children going places and they don’t ask me to go because they know I can’t. They used to ask and I would say no. It’s at the stage they don’t ask any more,” she said.

“People tend not to visit me either because they know it can cause a meltdown with the children because it’s messing with their routine. It is lonely,” Louise admitted.

She also gets little rest at night.
“Two of the children don’t sleep. They will sleep two or three hours and then could be awake the rest of the night. Ethan could be awake between 11pm and 5am. I have a webcam for his room so sometimes I can stay in bed but generally I am up and down,” she said.

Before having the children Louise had hopes to go to college and study forensic science.
“Ethan was very sick so I knew I couldn’t go back to work. Then when Kyle and Alanna both were diagnosed it meant I couldn’t go to college. I had to give up anything I wanted to do to look after them.
“I wouldn’t change it, but that’s the path my life went,” she said.

Finance is a stress too.
“I do get bits and pieces we are entitled to, but the HSE are not providing therapies they need so I have to pay for them. Ethan has special drinks and I have to get specific food for the others with their autism which can be the more expensive brands. It all causes a bit of stress,” she said.

However there are bright moments for the busy mother.
“There are some amazing moments. When they give you a big squeezy hug, and they want to be with you, and want to play with you. There are more good days than bad,” Louise said.

The support of other parents online helps the lonely nights.
“I am in a few groups for autism and special needs and we all keep each other going. You can vent on a bad day and they understand. My family are around too they all moved down from Dublin to Stradbally and that is a help,” Louise said.

Receiving the award is a recognition of her sacrifice she said.
“It’s great to see that someone accepts what we do, and understands how it’s a 24 seven job. We are very isolated. It’s tough, mentally and physically,” she said.

The award was announced by Family Carers Ireland in partnership with Netwatch.
“Louise Marie represents the 355,000 carers all of whom do exceptional work in providing a remarkable level of care in the home for loved ones. There is little or no time left for Louise Marie to do the things she would love to do. Caring is a 24/7 job. Those who know Louise will know she is a worthy representative of the magnificent work performed by carers all over the country,” the organisation said.

Louise will represent Family Carers on November 22 in the Family Carer of the Year Final in The Weston Hotel, Dublin.

Laois Carer of the Year is sponsored by Netwatch, The Maldron Hotel, Midland Park Hotel and The Blow-dry Parlour.