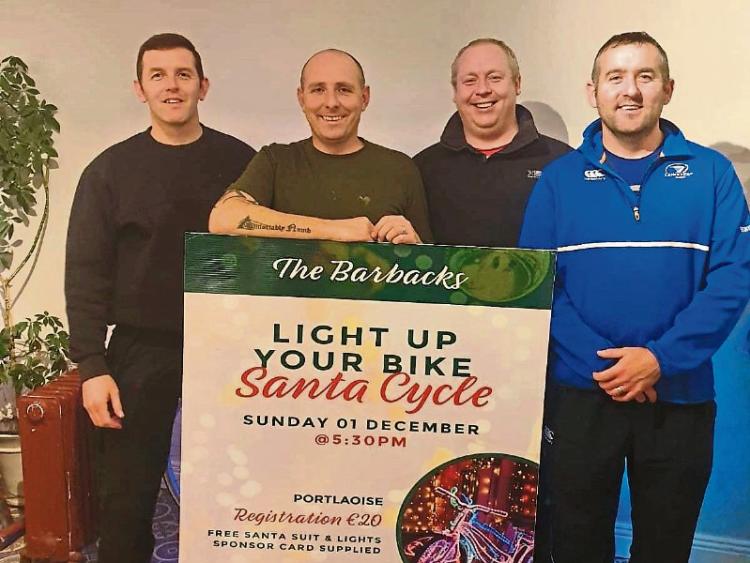 A wonderful festive spectacle will happen in Portlaoise on December 1, when a vast stream of Santas will cycle around the town.

The first Santa Cycle will see some 150 Santa Clauses on bicycles lit up with fairy lights in a 14km fun festive spin around the town’s outskirts and up Main Street.

The charity event is in aid of Downs Syndrome Centre Midlands and Teac Tom, a centre for suicide prevention.

It is organised by the Barbacks, a group of friends mostly living in Portlaoise and working in the Defence Forces or in local garages.

Jason O’Neill from Portlaoise is one of them.

“It’s our first time to organise a Santa Cycle, we’ve seen it done in Dublin and Cork and we thought it would be good for Portlaoise,” he said.

He explained how they chose the charities to benefit.

“We picked the Down Syndrome charity because one of our members has a daughter who uses their services, and Teac Tom because we have had a few friends in the Defence Forces who died by suicide, so we hope it will help raise awareness,” he said.

They had a registration day last Friday in the Killeshin Hotel and will hold a second one there on Friday November 22 at 8pm. Entries are filling fast.

Entrants will receive a free Santa suit complete with beard, and a string of lights to get them going, for a €20 entry fee.

They can also opt to take a sponsorship card to raise extra money. The 150 suits were sponsored by the Dublin base of PicMonkey photo app.

The cycle departure time from Killeshin Hotel is 5.30pm, returning for tea, coffee and finger food an hour or so later.

“We hope to light up the streets of Portlaoise so feel free to add as much lights to your bike. The cycle will be a nice slow pace. It’s a good way to kick off December, we hope it creates a great atmosphere for kids and big kids too. We hope to raise €1,000 for each charity,” said Jason.

The event is for over 16s, and under 18s must be accompanied by an adult. Helmets must be worn - Jason advises sticking your Santa hat on it - and front and rear bike lights must be used.

To register for the event on Eventbrite click here.