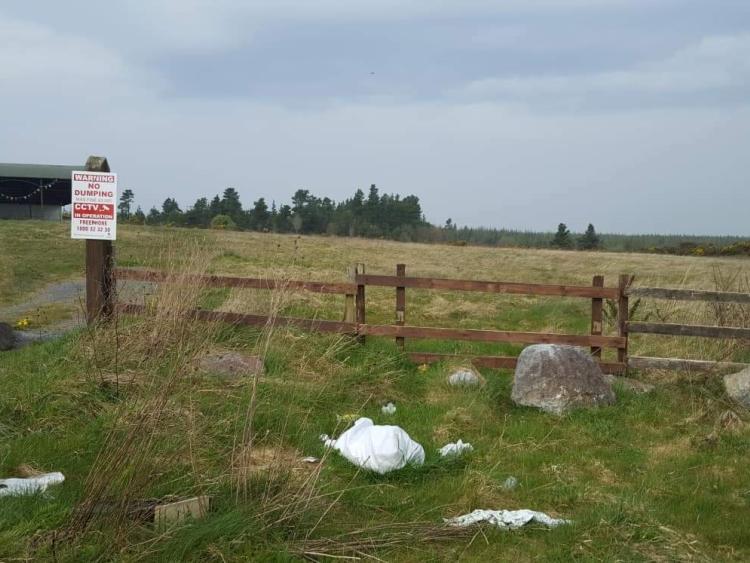 Dirty nappies, mattresses, clothes and garden waste are among the household waste being dumped on roads, bogs and drains across the Laois countryside to the growing anger of communities.

In a Kilcavan bog, the local Neighbourhood Watch members recently foiled an attempt to dump and burn rubbish on Thursday April 9.
Laois Gardaí have confirmed that they are investigating the incident on Culagh Bog, a target for dumpers.

The group rang Gardaí to report a jeep on trailer on its way to the bog full of bags of rubbish.
“This rubbish was set on fire and then the fire spread to the bog as it was very dry. The fire brigade and two fire jeeps had to turn up to put out the fire. If they did not get their on time we would had a big fire on our hands.

“The guys that dumped the rubbish and lit it on fire were on their way back out of the bog and were stopped by the neighbour watch and blocked until the Garda arrived. The Garda were on the scene very quickly,” an eye witness told the Leinster Express.

Below: Laois fire crews extinguishing the burning rubbish in Kilcavan. 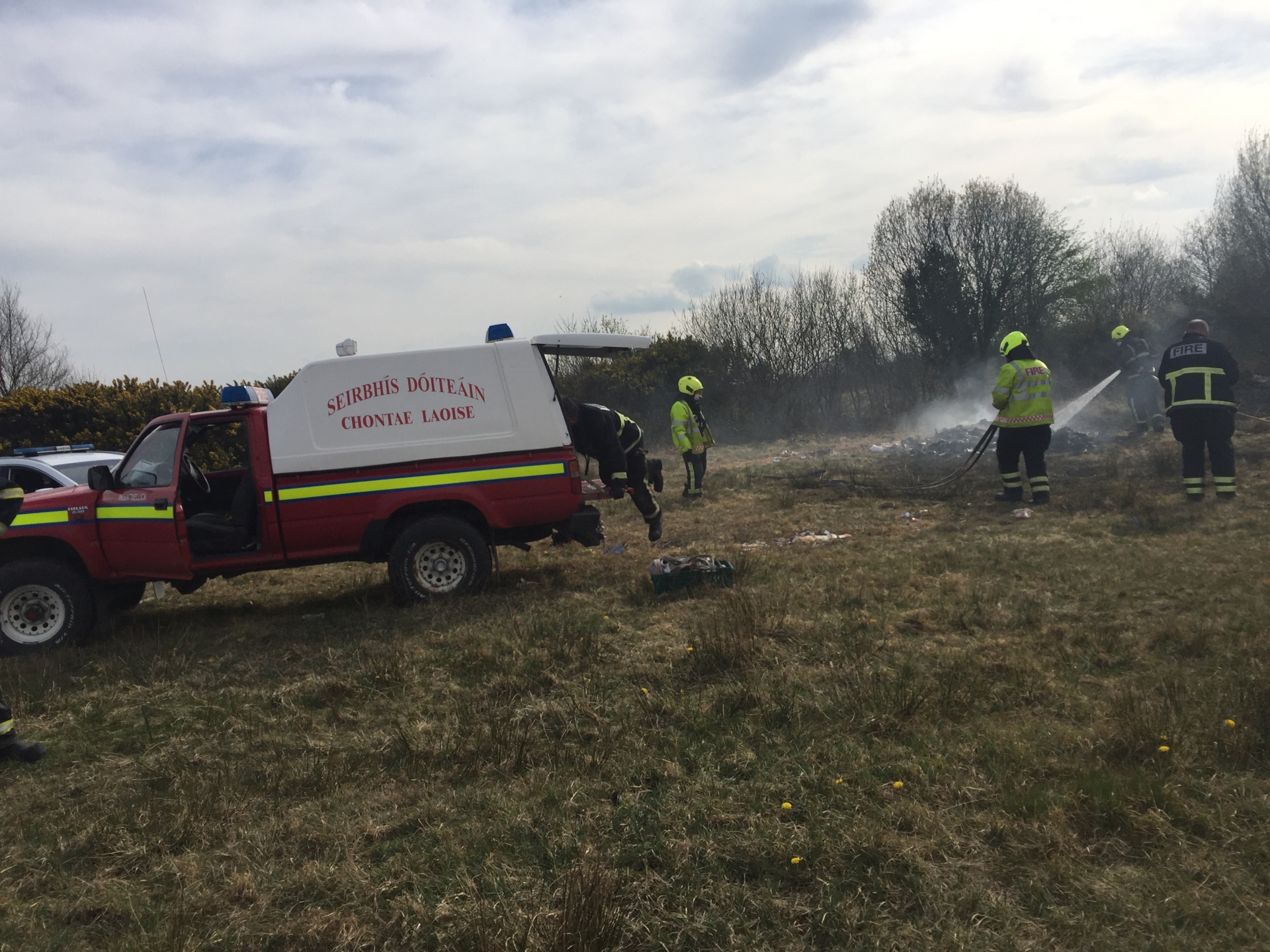 They shared photos online of their bin after bags of household rubbish were dumped in it. 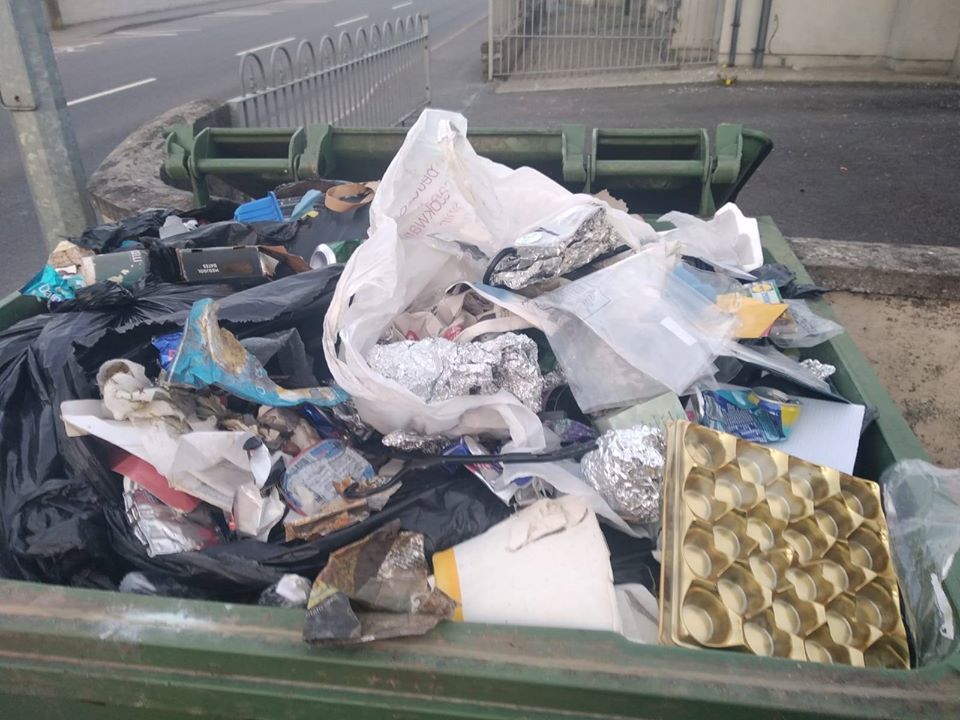 Durrow Community Services said it is costing them more money.
“This action is placing an extra financial burden on the service which is already feeling the strain from extra demand during the Covid-19 Crisis.
“Many elderly residents in the locality rely on us to provide a hot meal while they are cocooning. These selfish actions certainly go against the goodwill and generosity that is at the core of this community,” said the service.

They say they will now have to pay for CCTV to deter what is an ongoing problem.

In Borris-in-Ossory, the Tidy Towns group were disgusted to find dirty nappies and mattresses and even a suitcase of clothes dumped on the slip road over the M7 motorway. It is on their Slí na Sláinte route, particularly visible now as everyone is using it for their daily Covid exercise.

Below: some of the rubbish collected.

Angela Kirwan is Secretary.
“Eventually the litter warden took away 11 bags of rubbish. That section is constantly very bad, we believe it is people coming off the motorway,” she said.

The group have gathered another 15 bags from another approach road.
“We ask people to please think twice and respect the environment, we have no Tidy Towns competition this year but we have worked hard to have Borris-in-Ossory looking well and we want to keep it clean,” she said.

Below: the dirty nappies on the road near Borris-in-Ossory. 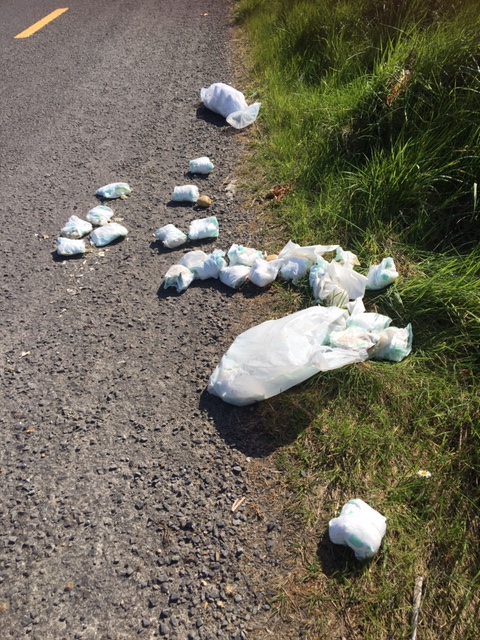 Cllr Conor Bergin is from Borris-in-Ossory.
“With the pandemic we have seen less traffic and noise and air pollution but we haven’t seen the same for dumping. In my own area I have seen used nappies and in a public health pandemic that is completely unacceptable.

“I am anxious that Laois County Council avail of the dumping funding.
“The only way is for people to be named and shamed in local papers, that would give me the greatest pleasure to see,” he said.

In Rosenallis, a clothes bank recently became a dumping ground, as did the nearby Festival Field where people are dumping piles of dead vegetation and bags of rubbish (story photograph). 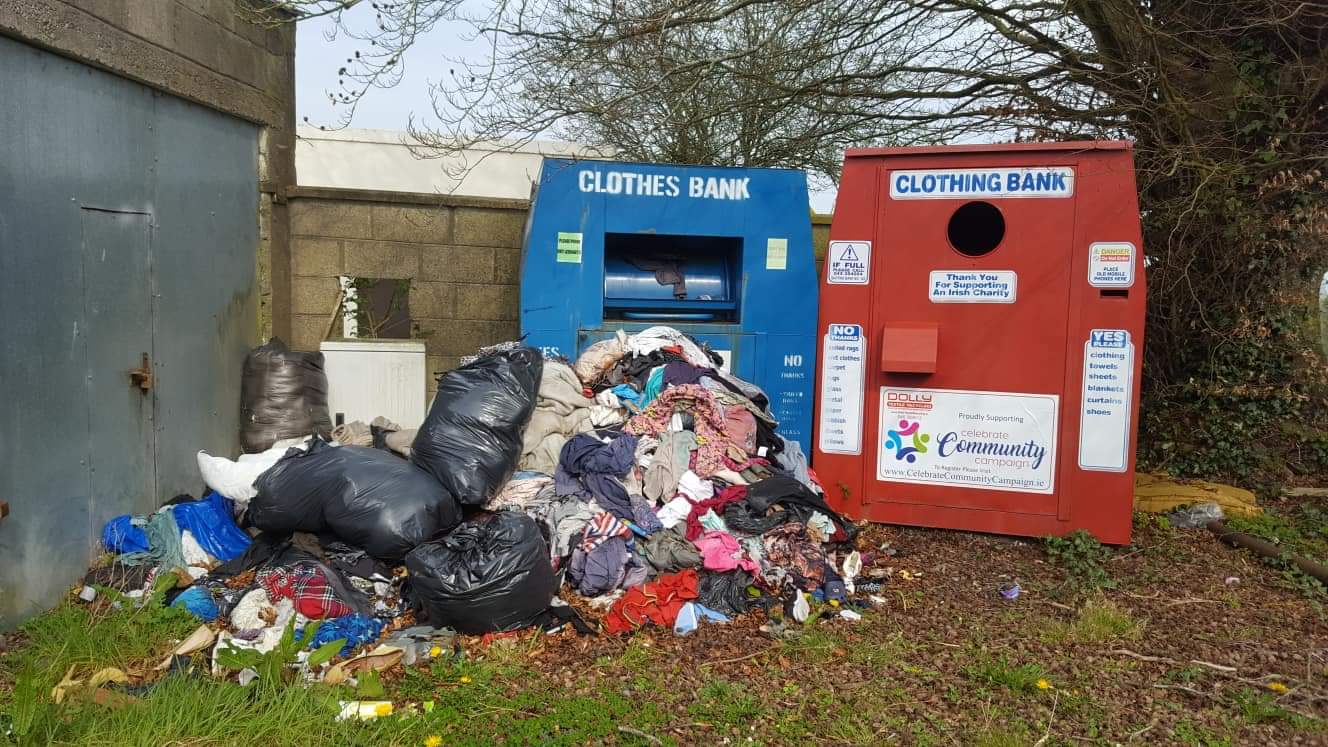 Sheila Mahon who is administrator of Rosenallis on Facebook, posted the shocking photos.

“It was cleaned up by a kind volunteer who happened to have a skip and so paid for the cleanup himself. I was so angry and disgusted. it's very disappointing. One of the clothes banks was empty but it looks like people presumed it was full,” she said.

A nationwide effort is underway to catch illegal dumpers. Investigations will lead to fines and possible prosecutions, with the maximum fine being €15 million on conviction and or imprisonment for up to 10 years.

Dumping in Laois an 'epidemic' during a pandemic says councillor

Dumping in the Laois countryside has been described as ‘an epidemic’ during the Covid-19 pandemic by a councillor at the monthly meeting.

However, a senior council official says it is no more than normal judging by the number of complaints received by the environment section. Laois County Council's Director of Services Simon Walton said the difference is that his environment staff cannot clean up the rubbish dumped illegally during the Covid-19 restrictions.

Mr Walton address the sitution when it was raised the April meeting of Laois County Council.
“There were 83 environmental complaints in April 2019 and 59 of those related to illegal dumping. This year we had 85 complaints and 64 about illegal dumping.
“The big difference is, and it shows the value of our litter wardens, that they are not in a position due to the public health restrictions, to effect the clean ups that they would normally do. That is giving rise to huge unsightliness around the county.
“Hopefully they will be lifted in the coming days and weeks and unsightly areas will be addressed. I note the comments on covert CCTV and the naming and shaming and obviously that is something that we would be very keen to advance and be part of,” he said.

Cllr James Kelly has called the dumping in Laois an epidemic.
“We have a pandemic with Covid-19 but the dumping that’s going on is an epidemic and the staff and resources are stretched to their limit.
“The protocol now is they visit the site, they take the photos and due to Covid-19 they cannot carry out a proper check of the dumping that’s going on. The Laois countryside is now a dumping ground. The likes of Clonenagh, Derrybeg, Trumera, Rosenallis and Borris-in- Ossory, and a lot of bogland has been destroyed with dumping at the moment. Everybody is at home, domestic waste has to rise.

He said levels have risen.
“The statistics might be there but these are the facts. People are probably fed up making complaints and ringing in. It’s just out there all over the place,. It’s a disgrace” he said.

Cllr Catherine Fitzgerald welcomed the return of full opening hours at Kyletalesha.
“I have been getting complaints from a lot of people about a lot of illegal dumping,” she said.
Kyletalesha Landfill reopened to full hours last Tuesday May 5.