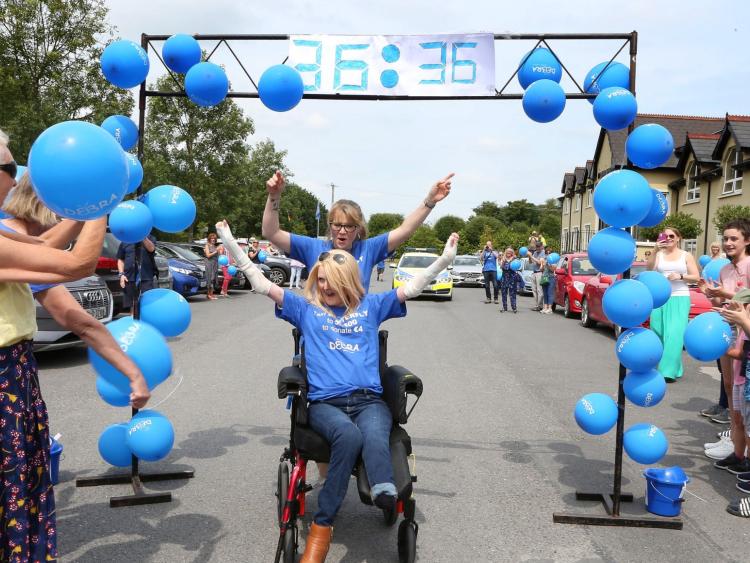 Laois hero Emma Fogarty has given her reaction to smashing her painful 36th birthday challenge, with the money flooding in from donations.

Last Thursday June 25 she crossed the finish in Abbeyleix on her birthday to a cheering crowd, having walked a total of 36km, one for every year helped by her PA Georgina.

“This challenge has probably been the most amazing thing I’ve ever done. Blood sweat & tears went into it…literally. There were days that I thought I couldn’t do it but I actually enjoyed it more than I ever thought I would have. I think I’ve been bitten by the bug and walks will now be part of my weekly routine," she said.

"The last day I had to do 3km and it accidentally fell on my birthday. I was so excited. I left from the Manor Hotel with a Garda escort, the hotel was empty when I left it and as we returned the Garda car turned on its sirens and when I came into view of the hotel it was packed with people.

"The whole town came out to support and congratulate me. I’ve never felt so humbled, supported, special & emotional in my whole life. It was truly unforgettable. But the moment my community, friends & neighbours started singing happy birthday to me is something that will stay with me forever. It brought tears to my eyes," she said.

Emma's fundraiser has reached over €87,000, far surpassing her initial hope of raising €3,600 for Debra Ireland.

Actor Colin Farrell has cycled 36km in support and Irish rugby captain Johnny Sexton plans to do the same today.

This week's Leinster Express out now has a special feature on Emma's great achievement with photos.