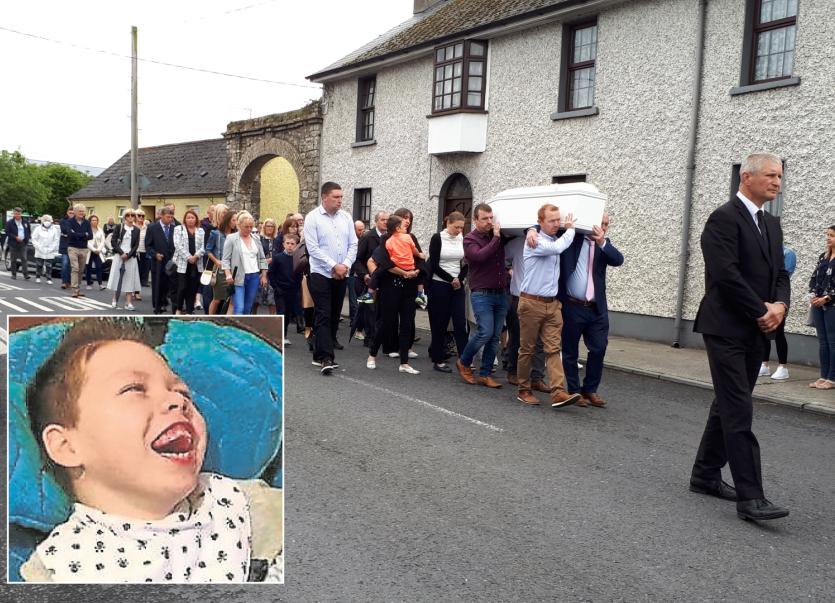 Mourners carry the remains of Ben Connolly (inset) to the church in Mountmellick.

People lined the streets in Mountmellick, Laois on Saturday morning July 25 to bid farewell to sweet smiley Ben Connolly who passed away aged 11 on Wednesday July 22.

Ben and his late brother Jake were the inspiration behind the Ben and Jake Connolly Trust, when an entire community came together to raise over €250,000 to build the boys a special home for their medical needs.  it was only recently completed and will stand as the boys' legacy. Read more on how the house got built here. 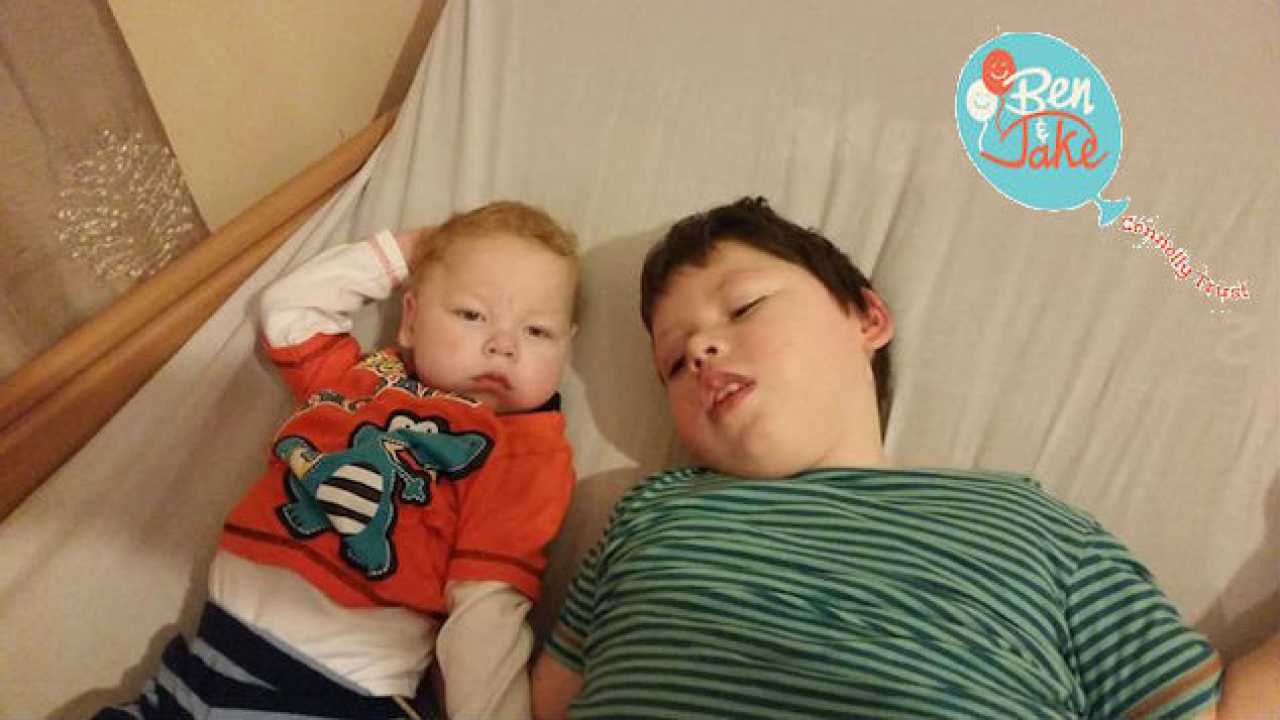 In St Joseph's Church, a heartbreaking final song was sung to him by his grandad Con Farrell, Adele's 'To Make You Feel My Love' .

Con had read out a tribute sent to his daughter Nicolette , Ben's mother, from her sister Aoife in Australia who could not get home for the funeral but was watching it on the church's webcam like many others.

“Your mammy would say something that Ben would find funny and right on queue his smile would come. Come from Ben across the room, one of the biggest brightest most adorable smiles, rewarding in every way that would light up the room and your heart. So to you Ben, our smiler, rest well but you will live in our hearts forever," he read out.

He thanked Jimmy Farrell a long time friend to the family who was instrumental in giving the field for the trust house, which it is hoped in time will be a safe haven for other children with life limiting conditions and their families.

“As Nicolette spoke to Ben, it was always in a melodious musical fashion just like Mary Poppins. Never in 11 years was she ever cross with Ben. Not even after many nights of very little sleep and there was plenty of them. Nicolette’s most heartfelt saying was ‘everyone should have a Ben’. Indeed he brought sensibility into our lives. Ben showed his funny side and he had a great healthy laugh. When Nicolette would say to Felix the cat ‘get off the bed Felix’ or to Max the dog ‘go out Max’ Ben would go into hysterics every time. His smile was always infectious.

"Ben’s real love was music and song. Years of coming up, Marian and myself on Connolly Street, we would spend hours singing and playing music to him. He just loved it. One of his favourite songs was ‘make you feel my love’ and with encouragement would always attempt to sing, without words obviously but he was always perfect when it came to the end of the song.

“Granny wore a path around Mountmellick with the pushchair to give Nicolette a breather. Ben loved great music. Dino, JLo, Jedward, The Archies, Rod Steward, Roy Orbison and just like every young boy and girl in Ireland, Ed Sheeran, Singing Out Loud. He went ecstatic for that one. That was also a big one for his brother Jake.

“There was no doubt the love that Terence and Nicolette showered on Ben, and they were rewarded with the love returned in bucketfuls. One of the nurses said ‘he was never a problem to mind, having him was adorable’.

“Every family member, every nurse, everyone who had a reason or pleasure to connect with Ben, he will leave footprints in our memories but the ones he will leave in our hearts, we will have forever," Con said.

Ben’s granny Mary Connelly from Portarlington thanked everyone who cared for Ben and who helped get the house built.

“As you all know Ben moved into his purpose built house eight months ago in Graigue. It is unbelievable the difference this house was to make. He was surrounded with all his needs and comforts such as hoists, showers, music and most of all sunlight and his little trips around the garden in the company of his loving family and dedicated nurses.

"All this would never have happened if it was not for the members of the Ben and Jake Trust and committee to whom we owe an enormous thank you. To Joe McEvoy and PJ Dempsey Trustees who took on the toughest job of their lives . To the committee, Cathy, Deirdre, Nina, Janet, Rose and Niamh, who took on the organising of the fundraising and last but not least the people of Mountmellick, Portarlington and the wider community of Ireland, for their donations and the voluntary workers, hardware stores and all businesses, everyone who gave their time or materials. Without you it would not have been done," Mary said.

She thanked Ben’s nurses, his “nursing family who showered him with outstanding love, care, comfort”, his communicator team, his palliative care team, the paediatric ward in Portlaoise and Temple Street hospital.

“Now Ben has joined his little brother Jake and his cousin Molly Grace, with the angels. Heaven has gained what we have lost. Fly high with the angels our little chaps,” she said.

“Last Wednesday little Ben Connolly left us. Leaving a family shattered and a community of devoted family, friends and carers and supporters. Here in Mountmellick and way beyond it as well, in great sadness.

“But maybe we should be remembering him as big Ben. The older brother of Jake and Billy. And the boy with a big brave and courageous heart. Big Ben’s passing brought tears and upset and no little grief. Loved, cared for so much by Nicolette and Terence and the Farrell and Connolly families. Ben’s story, Ben’s life has impacted on us all. And today as we honour him we also honour the commitment and the dedication and the passion that so many have shared and shown to a little boy that would meet his challenges in a very loving and in a very brave way.

Fr Murphy shared a poem by Christy Kennelly that he had also read out at Jake’s funeral in 2016.

“I did not die young, I lived my span of life within your body and within your love. There are many who have lived long lives and have not been loved as me. If you would honour me then speak my name, number me among your family. If you would honour me then strive to live in love. For in that love, I live. Never ever doubt that we will meet again. Until that happy day I will grow with God and wait for you”.

Nursery rhymes were included among the hymns during the mass, held for family only due to Covid restrictions.

The Mass was followed by a private cremation service.