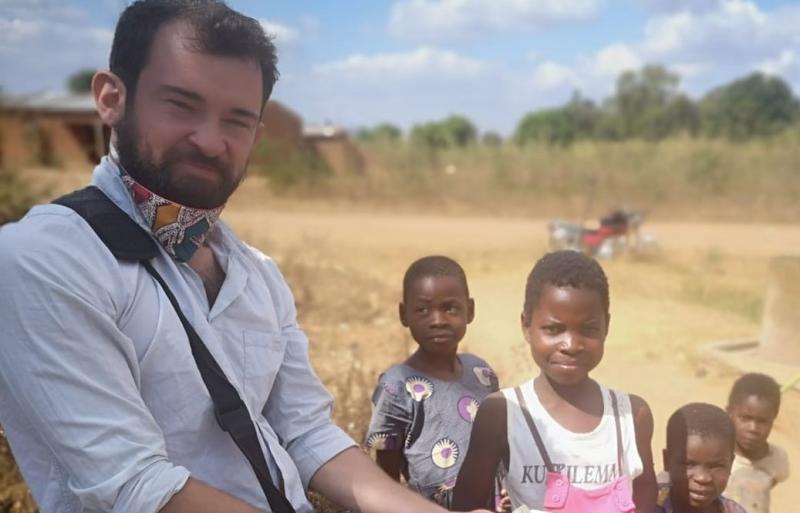 A Laois aid worker is risking his own life to volunteer his help to protect impoverished African communities against Covid-19.

Evin Joyce from Glenbarrow in the Slieve Bloom mountains has spent the last nine years working for the United Nations and for UNICEF in Africa, and is a member of the Irish Aid Rapid Response Corps.

He returned to Zomba in Malawi last February on a volunteer basis to help the communities he had come to know, before the extent of the Covid-19 worldwide pandemic became apparent. 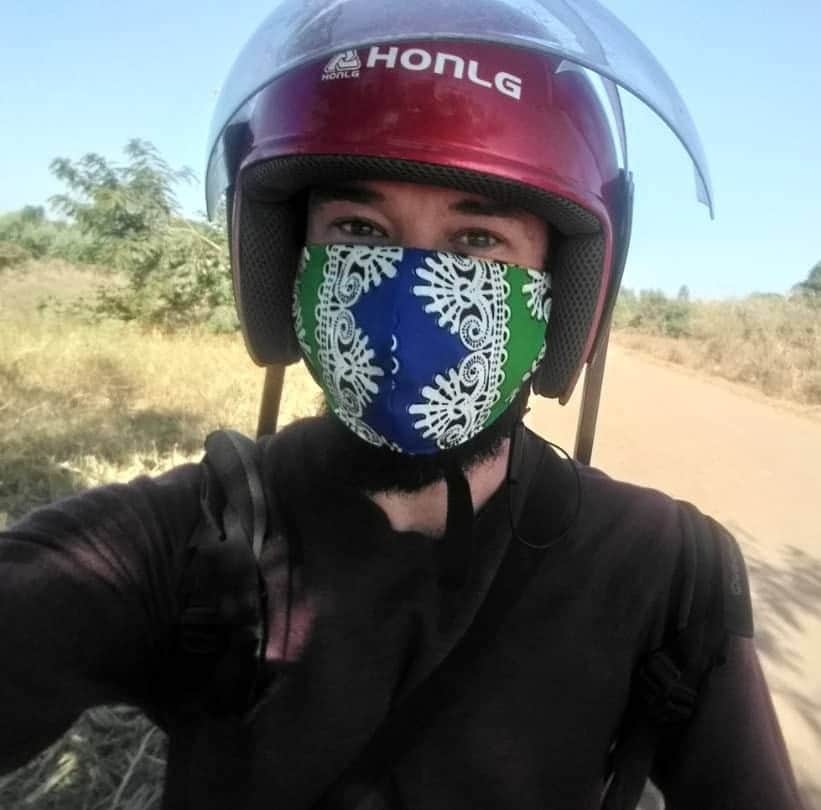 Evin had arrived with a plan to continue his previous work to provide some education to small children living on remote river islands, who would never get to any school.

He was being advised by his sister Ailbhe who is a primary school teacher currently working in the United Arab Emirates.

He explained to the Leinster Express how isolated the islanders are.
“There are no government schools on these islands and very few have access to healthcare.

“Much like the Blaskets were in Ireland in the 1950’s, it’s government strategy to move them to the mainland because they are liable to flood. But the locals want to stay because it's fertile land and it’s their culture and home. Education is vitally needed,” Evin explained.

Below: children with Evin on the river shore. 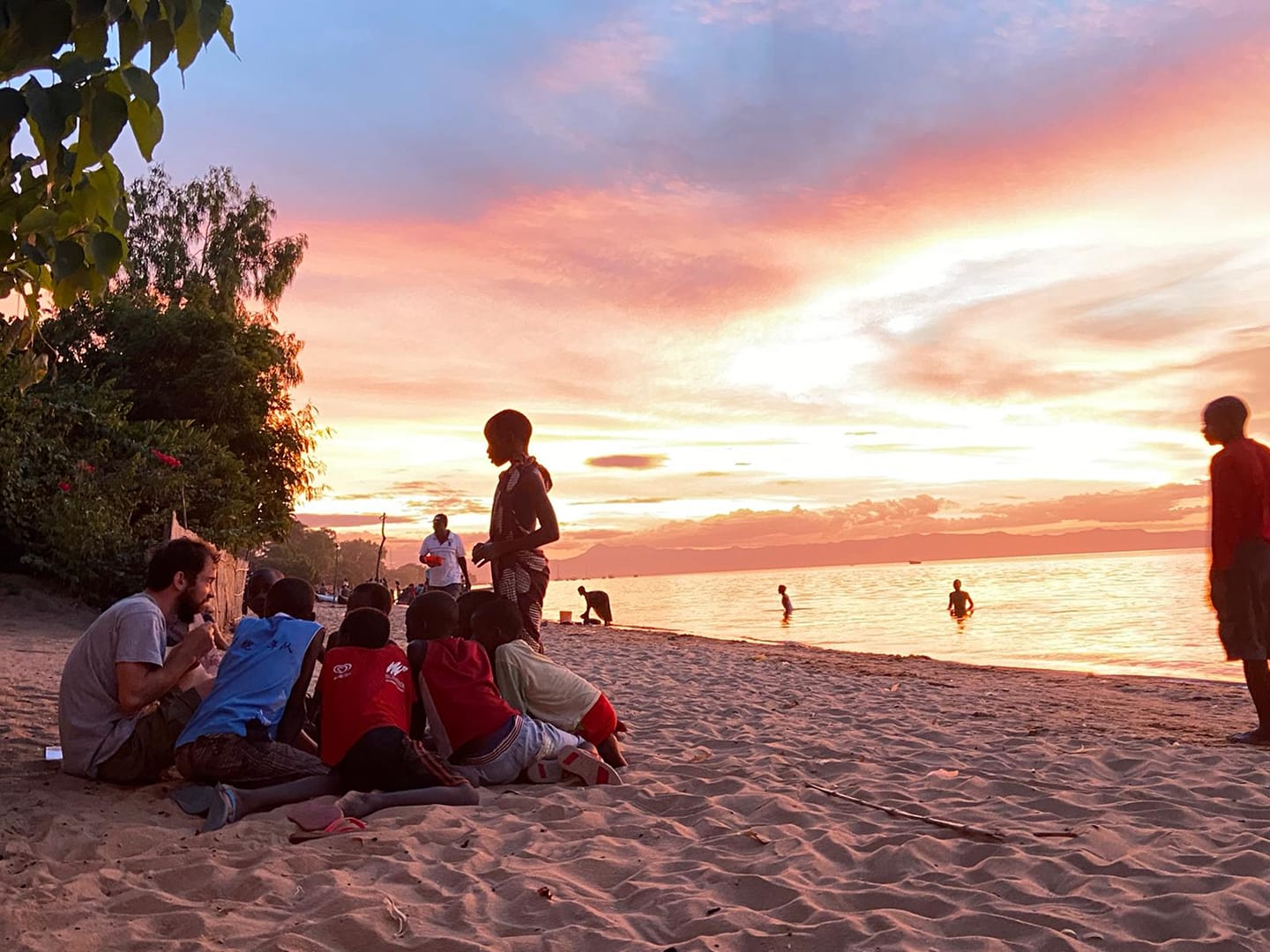 However Evin's concern that he could inadvertantly pass on Covid-19 to the river islanders caused him to decide not to go the islands.

Instead he put the books on a boat to deliver.
“It was a sad trip. I thought that’s the end of me doing community engagement.
“Then by chance I bumped into a Donegal priest on his way back, Fr Eoin O’Donnell. He is in Zomba for 37 years, since 1983. We had a great chat and he offered to rent me the teacher’s house for €13 a month,” he said.

“I took him up on it and this evolved into leaving pots of crayons and bits of paper in trees for the children,” he said.

As concern for Covid-19 grew, Evin learned from local healthcare workers that increased awareness was required among the communities.
“We started having ‘waterpump meetings’. The women come with their buckets to the waterpump at 6am every morning. We got the children to translate information posters.

“People understood and were worried and they started asking us what could they do. As an aid worker, that’s all you want to hear,” he said.

Below: a waterpump meeting in progress. 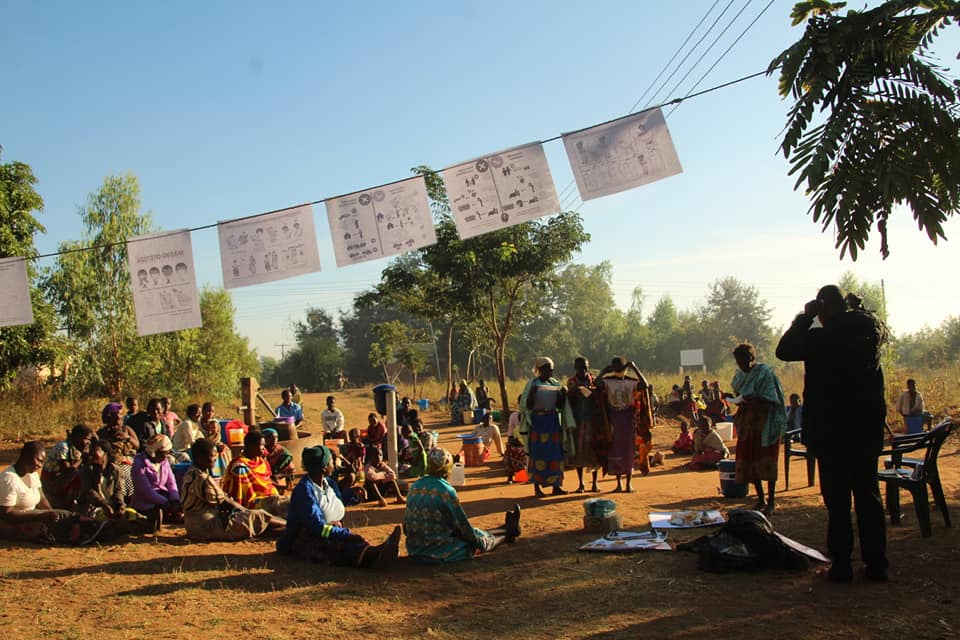 Evin learned that what was most needed was simply bars of soap and face masks. he began gathering donations from home, over €2,000 and from April onwards, oversaw the distribution of over 2,600 bars of soap and locally produced masks.

“We mapped out their communities on big flip charts, where the people over 60 were living or people with underlying conditions.

“We did simulation exercises where a community would take on the care of someone in isolation. Someone is nominated to take care of them and the kids are moved out of the hut. Food, firewood and water is delivered to the isolated home.
“I gave them soap and masks to sell for 28c. letting them keep the proceeds to use to care for people in isolation in their communities,” he said.

The area is so poor that anyone with symptoms of Covid-19 may not admit it, because to isolate means to not be able to work, and then have no money for food.
“The healthcare system here is already overwhelmed with diseases like malaria and TB. There is one doctor per 90,000 people. People won’t be tested. The Malawi government is doing all they can but without resources.

“That scramble for PPE in Ireland and other countries was grand, but who didn’t get it? We didn’t. If rich countries can’t keep up with testing, we don’t have a prayer,” he said.

He knows he is risking his own life.
“I weighed up the risks, I had to make a decision at the end of March when a lot of my colleagues were leaving, but I’m really glad I stayed,” he said.

People back in Ireland can help Evin’s work, and a little money goes a long way.
He has now set up a Gofundme with a target of €45,219, one euro for every person in the catchment area of Likangala Health Centre in Zomba. Already it has passed €6,800.
“It’s brilliant. Thank you so much to everybody who has helped so far. Have no doubt that it will get to the target. It might not save lives but it will alleviate suffering,” he said.

The fundraiser called Masks4Malawi is also offering beautiful locally made masks for sale to Ireland. Evin intends to bring home a suitcase of them at Christmas when he comes to see his family.

The masks are made from colourful traditional chitenje material and an inner layer of recycled cloth.
“We will prioritise getting masks to people here first but we'll make sure you have them by Christmas,” Evin promises.

Donations of €50 or more come with optional membership to the 'Masks4Malawi' WhatsApp group.
The minimum order is for 25 masks at €2 each with free delivery in Ireland and Malawi. He offers free international delivery for orders of 50 masks or more.

Evin has announced a boost of support.
He has been given a free use of a vacant house and garden and €500 by the Need for a Better World organisation, which he is using to scale up supports to protect the region of 45,000 people.
Fr Eoin has also come up trumps again with the loan of a jeep, as Evin was up to now getting around with deliveries on a motorbike.

“Little by little we can meet the chiefs and mark where the schools and boreholes are,” he said, with the plan to have soap at every busy borehole to keep the one well-used handle clear of the virus.
“We're going to do our very best to get to the 45,219 people, to start with,” he said.

Evin who is a past pupil of Clonaslee College, is the oldest of four children of Anne and the artist Tom Joyce, with siblings Cian, Ailbhe and Olwyn.

Olywn says they are proud of him but also worried for his safety.
“As a family, we are very proud of his work. He has always been at the forefront of humanitarian crises around the world, seeking to help in any way that he can through contracted work with NGO's.

“This time he is working with no employer or contract and I guess, for me, that is more worrying as there is no straightforward repatriation if something were to happen to him.
“With his direct involvement with local communities, although he is taking necessary precautions such as handwashing and mask wearing, he is still at risk of contracting the virus and him, like any other person in the communities that he is working in, will not have access to ventilators or hospitals in the same way that we do in the western world.

“So yes, I am worried but also very proud and know that he wouldn't rest until he knew that he was doing all he can to help those in need as that is the nature of his character,” Olwyn said.

Below: tailors making up the masks and (bottom) children proud of their covid information posters. 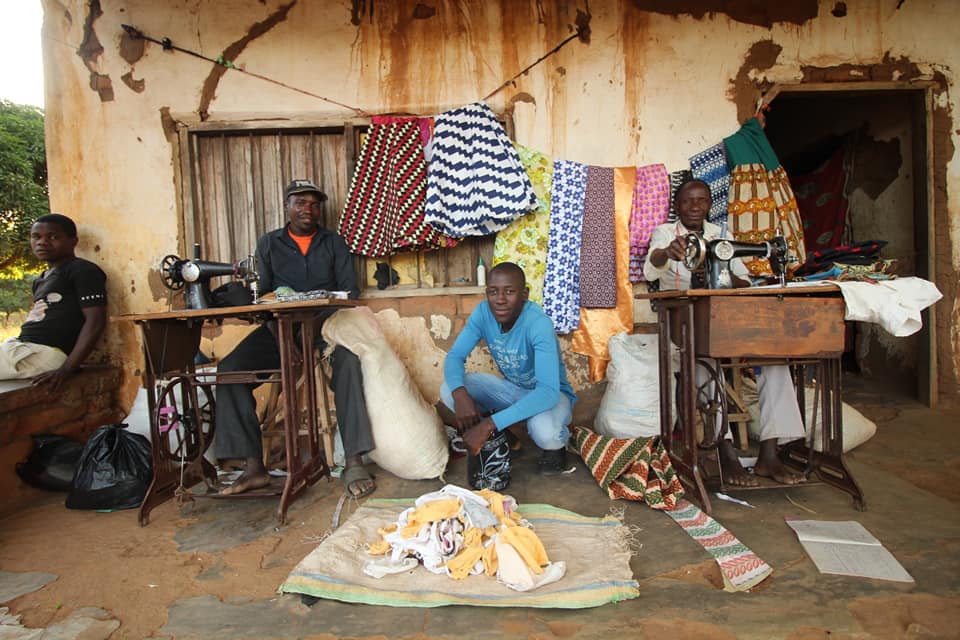 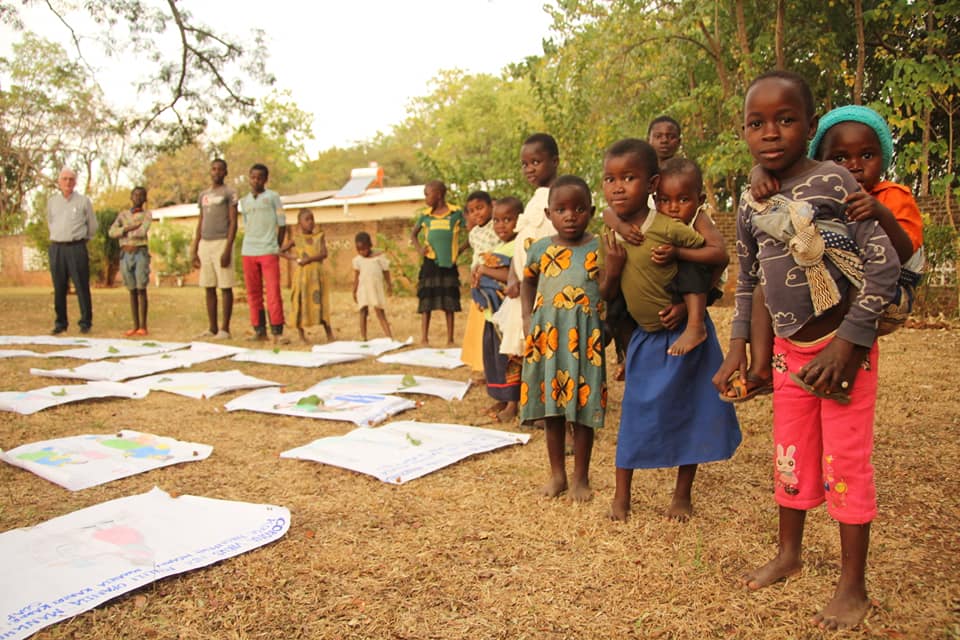