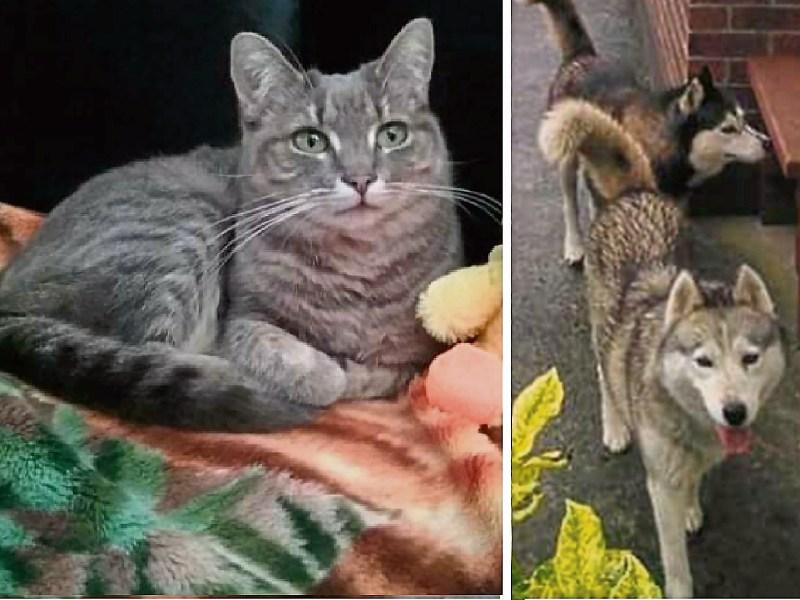 A beloved family pet in Laois was savagely attacked and killed by a pair of roaming husky dogs in Portlaoise recently.

A Garda investigation is now underway and the distraught cat's owners are pleading for dog owners to obey the law and keep their animals under control, warning that a child could as easily be hurt.

The killing of Fuzzy the cat, 9, happened in the space of a 45 second frenzied savaging in her front garden in an estate on the Mountmellick road on Friday evening July 31.

The entire incident was caught on her owners' CCTV cameras, and they had the difficult task of watching the footage afterwards.

“We could see her sitting in the garden happily looking around her. Suddenly the two things came in and savaged her. They took it in turns to pull her apart. She managed to jump onto the fence but one of the dogs pulled her back down,” the woman said.

The owners wish to be anonymous. They say that since publicising the death, at least two other local people have confirmed that their cats were killed too with the same two dogs suspected.

On the day the couple were in their home when they heard the commotion. The husband ran out to discover the dogs.

“They tried to bite him, then they ran off with her in one of their mouths. If I had gone out I might have been dead myself because I 'd have rushed over and got bitten,” she said.

Fuzzy was later found dead on the road in a nearby estate. Gardaí brought her body back to her owners, to their great upset but also their thanks.

“Her spine was broken, her back legs and her ribs. She was only a handful, only four or five pounds.

“The Gardaí were just lovely, they are keeping in contact with me and keeping a high level of visibility in the area,” she said.

The owner is deeply emotionally affected since the killing.

“I couldn't save her. I'm broken inside. I had to take time off work. I've cried every day since, I just crumbled. It was so cruel and brutal, like a murder,” she said.

“It could easily have been a toddler. Kids around here walk little dogs. We are trying to highlight the danger of any dogs, not just huskies. They are roaming the roads killing people's beloved pets.

“We have a rescue huskie ourselves. They are prey animals, they get wired if they are not walked enough. They just mauled her.

“She could nearly talk. She was adorable, so intelligent. When she wanted to come in she would sit on the windowsill, and when she wanted to go out she would jingle my car keys, that went on 24 hours a day. She would go for a hunt in the field behind the house and catch moths or a pigmy shrew, then come in soaking and stand waiting for me to dry her off.

“My life and soul depended on her. If she was out at night I'd be looking out waiting for her, my only fear was she would get killed on the road. I never thought dogs would attack her.

“It has left a massive void, it is horrendous. I have such anger towards the dogs' owners. I could barely look at my own dog for a few days. I still have her little bed. I have put a plaque and a rose where she is buried in our garden,” she said.

“We don't want the dogs to be put down, just taken from their irresponsible owner. I am not going to stop until I get justice. Fuzzy deserves that,” her owner said.