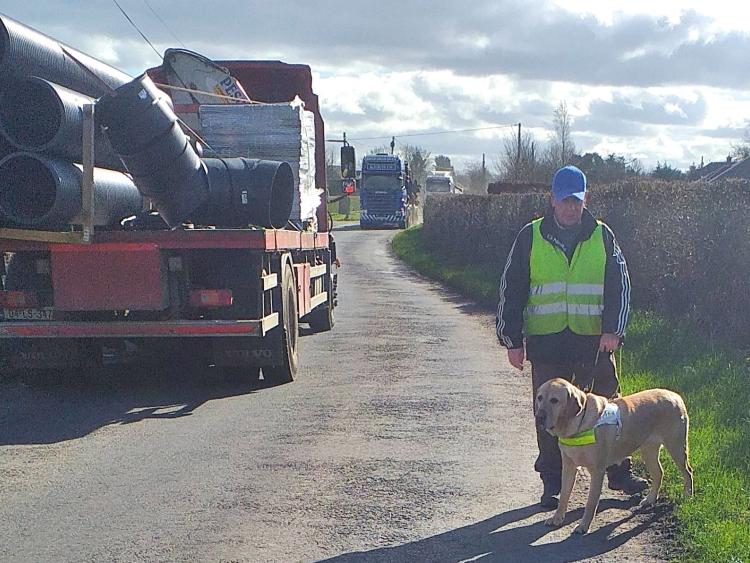 Residents who had campaigned passionately to get a footpath on a dangerous road in their town, have been successful.

Some 40 residents living in Forest in Mountrath had to avoid heavy traffic including lorries, school buses, agricultural machinery, delivery vans and cars to walk to Spa Hill into town, while the road is also on a popular walking circuit.

They enlisted the support of local councillors and the National Council for the Blind, as one of the local resident has a visual impairment and uses a guide dog on the road.

"This roadway has become extremely hazardous for residents.

“As a matter of urgency and in the interest of everyone’s safety we are asking that this pathway be finally completed by the council and to this end we are asking for your help and support,” the residents said in a letter.

Read more on their campaign here.

Their campaign to Laois County Council has been successful, for some of the route at least this year.

The first section of the new footpath has been given financial approval, announced this week.

The footpath will eventually be almost a kilometre long from Spa Hill to Forest in Mountrath, but phase one of 330m will be installed in 2021, Laois County Council has confirmed.

“There is funding to commence delivery of the first phase of the Spa Hill path. We will seek tenders shortly. The NCBI made representations to us regarding the needs of an individual on that road,” the Director of Services for roads Simon Walton said at the April council meeting.

Cllr James Kelly had raised the issue to the council in February and March, on behalf of residents. He also sought the details from Mr Walton at the council meeting and welcomed the news that it will be partly completed this year.

“It is great, this will hopefully address the most dangerous part of the road, on a bad bend. the residents are all delighted that work will go ahead with a commitment to do it in 2021,” Cllr Kelly said.

He said that as the road is also used as a walking loop around by the town's golf club, it will benefit many people in Mountrath.

The council Cathaoirleach Cllr Catherine Fitzgerald shared fond memories of walking on the road herself.

"It's very welcome. I used to walk that road to my granny's," she said.

The funding is part of the council's €27.1 million roads budget for 2021, described as “progressive, sustainable and ambitious” by Mr Walton.