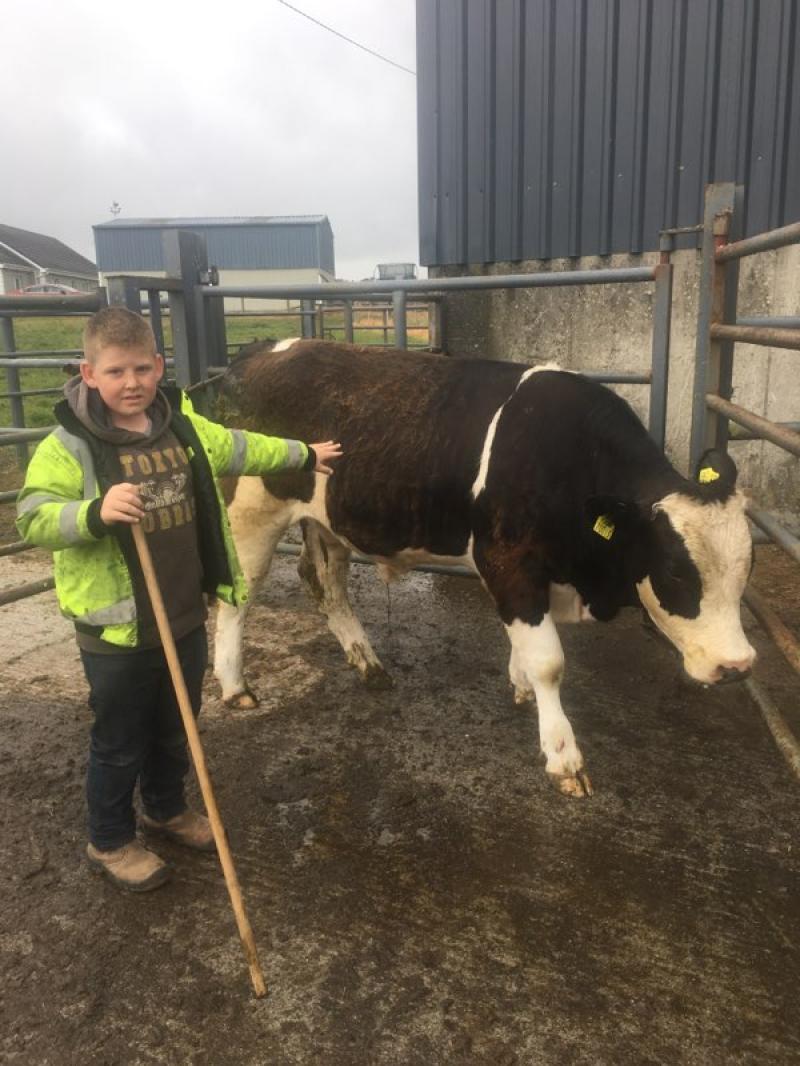 A little boy living on the Laois Offaly border has reared and sold his first calf and kindly given all the proceeds to help build a hospice for the midlands.

Patrick Kelly, 9, who lives in Glebe, Annabrack in Offaly and goes to school in Castlecuffe NS, Clonaslee got a record sum for his Simmental calf that he called Paddy.

The two year old calf was sold at auction in Tullamore Mart last Thursday May 20, for €2,100.

Below: Patrick and Paddy at the mart. 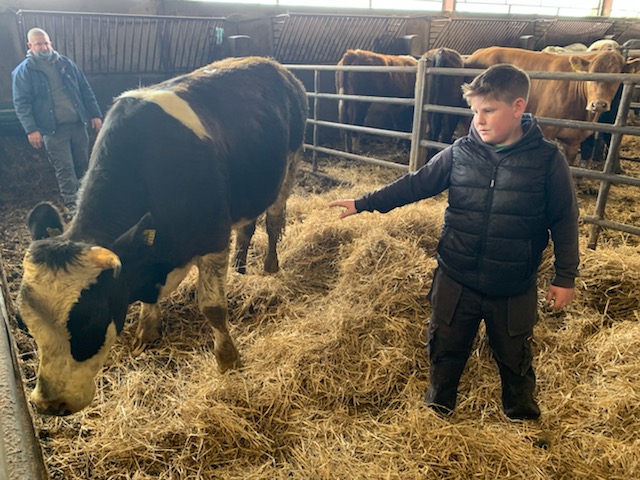 Patrick himself was brought up on the podium to help pull the heartstrings of buyers, and it worked a treat, with the calf getting an estimated €500 to €600 above value, bought by a regular customer of the mart from Northern Ireland.

He told the Leinster Express all about it.

"I had heard my daddy and grandad talking about Hooves for Hospice, and they had given me a calf to mind, so I just decided to do it. I enjoyed feeding him and dosing him and minding him. I was with him most days."

Getting up on the podium and hearing all the bids come in was a big moment.

"It was exciting, I liked that," he said.

His parents Amanda and Brendan are hugely proud of his generosity.

"Patrick didn't realise the significance of his donation, he's only 9, but he will when he is older. We are very proud of him. It is such a worthy cause," said Amanda.

Brendan said that Patrick, the third of their four children Niamh, Emma and Dáire, has always had an interest in farming, and visits his grandad Gerry Kelly in Clonaslee after school every day where he helps out.

"It was his first time to rear a calf. We don't normally have calves, I rear bullocks but we had bought a cow in calf so we gave it to Patrick. He shows a strong interest in farming. We are all very proud of him," he said.

"Patrick is a lovely young lad who took the day off school to be at the mart. I think it helped that we can have everyone physically back at the mart now, they could see him on the rostrum. I am thrilled for him. Almost every week we have a farmer selling an animal for Hooves 4 Hospice, it is getting a great response. Farmers are being very generous both in giving donations and in bidding," she said.

Hooves 4 Hospice is a fundraiser begun by Tullamore Lions Club aimed at farmers, to raise money for a Midlands hospice. The hospice is proposed to be based in Tullamore serving Laois, Offaly, Westmeath and Longford, the only region in Ireland left without an in-patient hospice.

Each county is asked to give money towards building it, a request met with some resistance by county hospice groups who want to use their funds locally. Amanda said for them there is no county border issue.

Brendan said farmers in general have responded hugely to the Hooves 4 Hospice fundraiser, where they are asked to rear cattle and sell them specifically for the fundraiser.

"They have been overwhelmed with the amount of farmers  who took it on, above and beyond what they expected. It's very important, it's badly needed. While no-one close to me has been in need of a hospice, we have close friends who have been. It's an exceptionally great cause," he said.

Meanwhile, asked what he wants to be when he grows up, Patrick had a bit of a surprise.

"I want to be a lorry driver, and a farmer too," he said.

The Midlands hospice would cost €9.5 million to build, with five hospice groups asked to contribute. After that the HSE will pay the €2.5m annual running costs.

CEO of the Irish Hospice Foundation Sharon Foley from Laois has described the region as a "blackspot" for palliative care.

“Everyone deserves a good death and we have a duty to work together to ensure that can happen. This is about people who are dying and the families that are left behind. The Midlands is being very much denied a full range of palliative care services.”