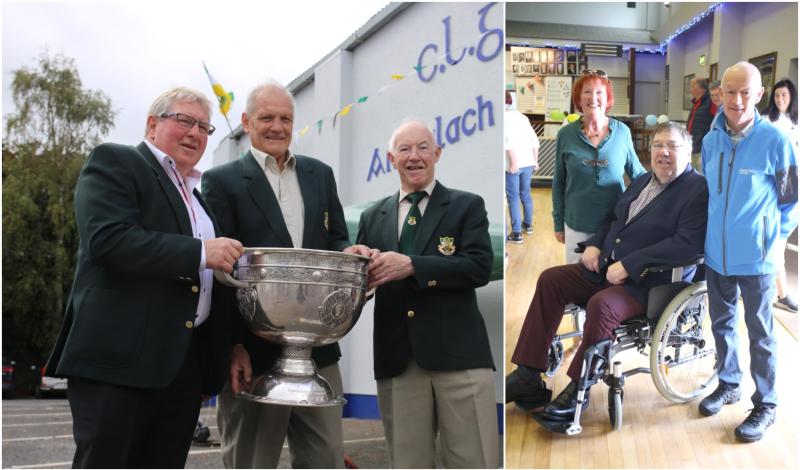 Mr Cowen was on hand as Offaly All-Ireland Footballing champs from 1971 paraded the Sam Maguire Cup once again to back the Paddy Fenning Walk which has raised more than €150,000 .

Fifty years to the day since they made the historic breakthrough by winning the county’s first ever senior All-Ireland title, the team reunited to honour their late teammate, who passed away last year after a stoic battle with motor neurone disease (MND).

Mr Cowen the launch the walk, commenting that the “spirit of Paddy Fenning is alive and well here this morning” and referencing “the great life that he lived, the great Tullamore man that he was”. He remembered how when playing underage football with Clara, opposing Tullamore teams invariably had Paddy Fenning at the helm and that defeat was often their lot.

Mr Cowen also recalled the Offaly team’s success of the early 70s and how, like youngsters all around the county at that time, he strived to perfect the “Tony McTague sidestep”.

He added: “I’m grateful for the opportunity to support this wonderful cause and I think of him [Paddy Fenning] and many others who have gone to their eternal reward but have left behind a great legacy and I hope that, in the years to come, we’re able to keep it up.” 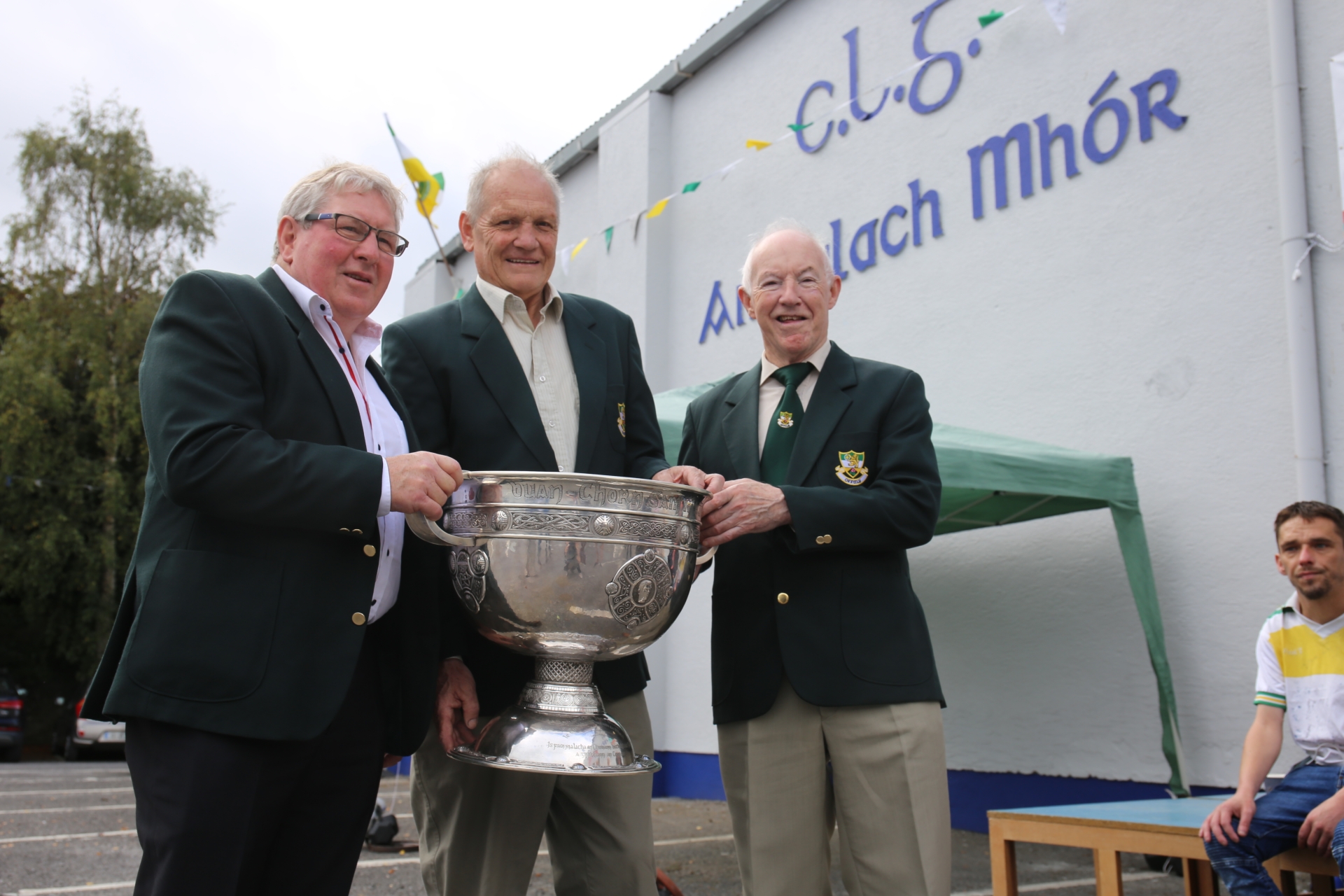 The last of Paddy’s many initiatives - to raise €150,000 for MND research and support services as well as homeless causes in Offaly - was realised with the sum surpassed as contributions poured in at Tullamore GAA Centre on Sunday morning ahead of the walk, which had some 300 participants.

The walk set off from Tullamore GAA Centre and down Convent View before continuing along the Grand Canal and returning on a loop to complete the 5km route.

To complete the walk, Willie Bryan and Tony McTague, the respective All-Ireland winning captains in 1971 and ‘72, carried the Sam Maguire Cup into Tullamore GAA Centre led by a piper.

Among others, Tullamore clubmen John Furlong and Cormac Egan, stars of Offaly’s All-Ireland under-20 win last month, mingled with the heroes of 50 years ago and posed for pictures with them and the famous trophy.

There were a number of brief speeches, with special thanks afforded to Offaly GAA secretary Colm Cummins and PRO Brendan Minnock for their help in securing the Sam Maguire Cup on the day.

The walk was originally due to take place in June of last year and fundraising committee chairman Joe Stewart noted how “our world was turned upside down within a matter of weeks of our launch night” in February 2020.

He explained: “The ensuing pandemic affected everybody’s life and our fundraising efforts were also upended. However like everyone else we persevered and thankfully we are here today to celebrate the successful conclusion to this fundraiser.”

He drew warm applause from the gathered crowd when revealing that the €150,000 target set by Paddy Fenning had just been surpassed.

“Today we want to remember Paddy the community activist and the family man and it is with great satisfaction that we can say here now that we have actually exceeded our fundraising target of €150k and we dedicate this success to Paddy’s memory.”

Lilian McGovern, chief executive of the Irish Motor Neurone Disease Association, said that she was “gobsmacked” by the funds that had been raised and cited the lack of funding that her body receives from the state.

Barry Fenning, son of Paddy, then spoke on behalf of the family.

“When my dad was first diagnosed with motor neurone disease, he knew there was no way of beating it,” he said. “It’s a brutal illness which doesn’t discriminate or relent.

“However, he wanted to find a way to use this life-changing condition to make a positive impact on the lives of others. Remarkably, he was planning this fundraiser from his hospital bed just after receiving his diagnosis.

“Although, I can’t speak for my dad, I do know how proud he would be to see the massive support for this fundraiser and the attendance at the walk today.”

Thanking the organising committee of Joe Stewart, Mary Roche, Jimmy Feery, Pat Marron and Pat Nolan, he added: “As a group and as individuals, you have never stopped driving forward this fundraiser during an extremely challenging 18 months.

“Your efforts have been immeasurable and without each of you, it wouldn’t have been the success it has been.”

Martin Furlong, Paddy’s longest-serving teammate across club, county and provincial teams, made the trip from his New York base especially for the event with his wife Katie and spoke on behalf of the 1971 team.

In an emotional address, he recalled their times playing together for Tullamore, Offaly and Leinster, lamented the loss of their friendship and the phone calls that they often shared since his passing in May of last year. He noted how he had made a promise to Paddy that he would travel home for the walk when they last met in March 2020 and that he “wasn’t going to let him down”. He signed off by saying that Paddy Fenning was the ultimate “true blue”.

Having distributed hundreds of sponsorship cards to drive the fundraiser, the draw for prizes was made before proceedings closed with Paddy’s friend and clubmate Mick Scully leading the gathering in a typically colourful rendition of The Offaly Rover.

TO VIEW THE FULL GALLERY OF PICTURES CLICK ON NEXT>