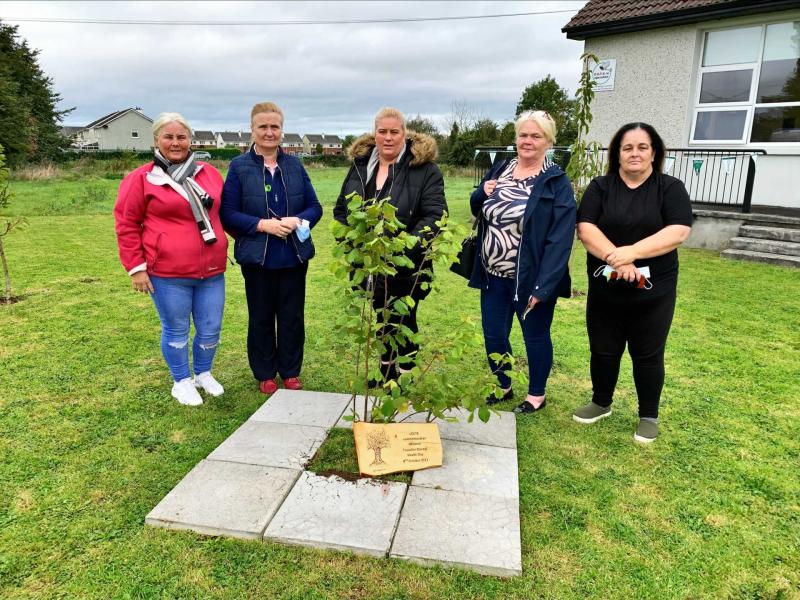 During this week, LOETB Further Education and Training (FET) employees and students were involved in a range educational and insightful activities, events, and workshops.

One such event was the planting of a Hazel tree which is a symbol of Travellers' strength, history, and resilience. The planting commemorated. National Traveller Mental Health Day , last Friday 8th October. This in LOETB Mountmellick, Further Education and Training Centre.

The outdoor  event was opened by Dermot Muldowney, the manager of Mountmellick FETC, who welcomed all present and in particular the two local Traveller rights organisations; Offaly  Traveller Movement and Laois Travellers Action Group.

LOETB’s CE Joe Cunningham explained that this event is part of LOETB’s first ever Inclusion Week, a week where LOETB  celebrate the importance of diversity and the special measures that are in place and needed  to ensure the centres and services are inclusive to all. 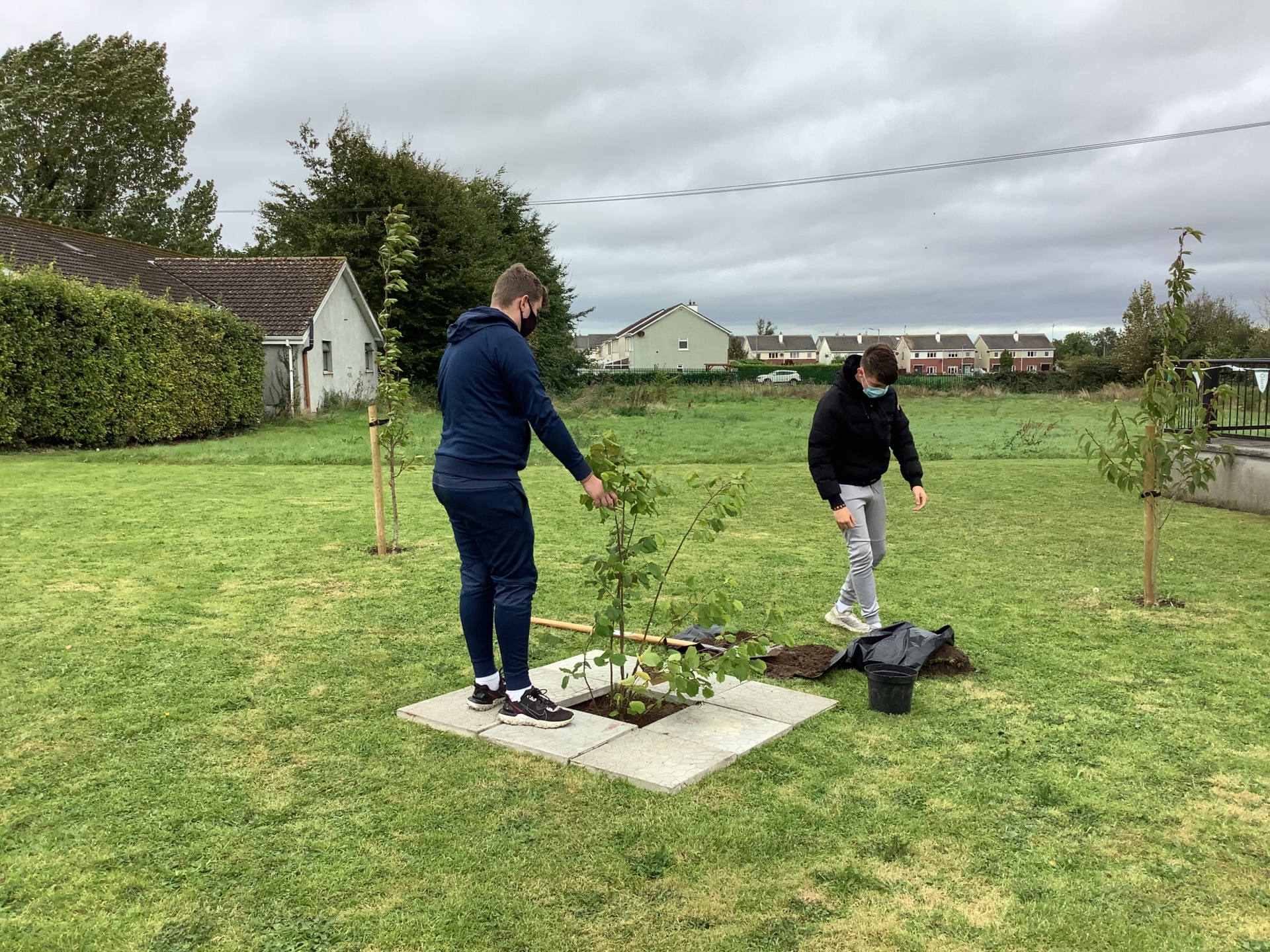 He was followed by a speech by  Sandra McDonagh, Sandra is the Managing Director of Offaly Traveller Movement, a Mental  Health Social Worker and a proud Traveller woman.

Sandra has a BA from Maynooth  University and was the first Traveller in Ireland to obtain a Masters degree in Social Work  from Trinity College Dublin. She spoke about the mental health crisis in the Traveller  community and how although maintaining mental health can be a challenge for all members  of Irish society, when this is combined with the experience of racism, exclusion, and  discrimination that the Traveller community experience, the challenge is far greater.

Travellers die by suicide at seven times the rate of the settled population, suicide accounts for  11% of all deaths in the Traveller community.

"This isn’t just a statistic,  this is real for us, the sad fact is that all of us Travellers here today know someone from our  community who has died by suicide. Our people are deeply affected by the trauma and  suffering that this is causing," she said. 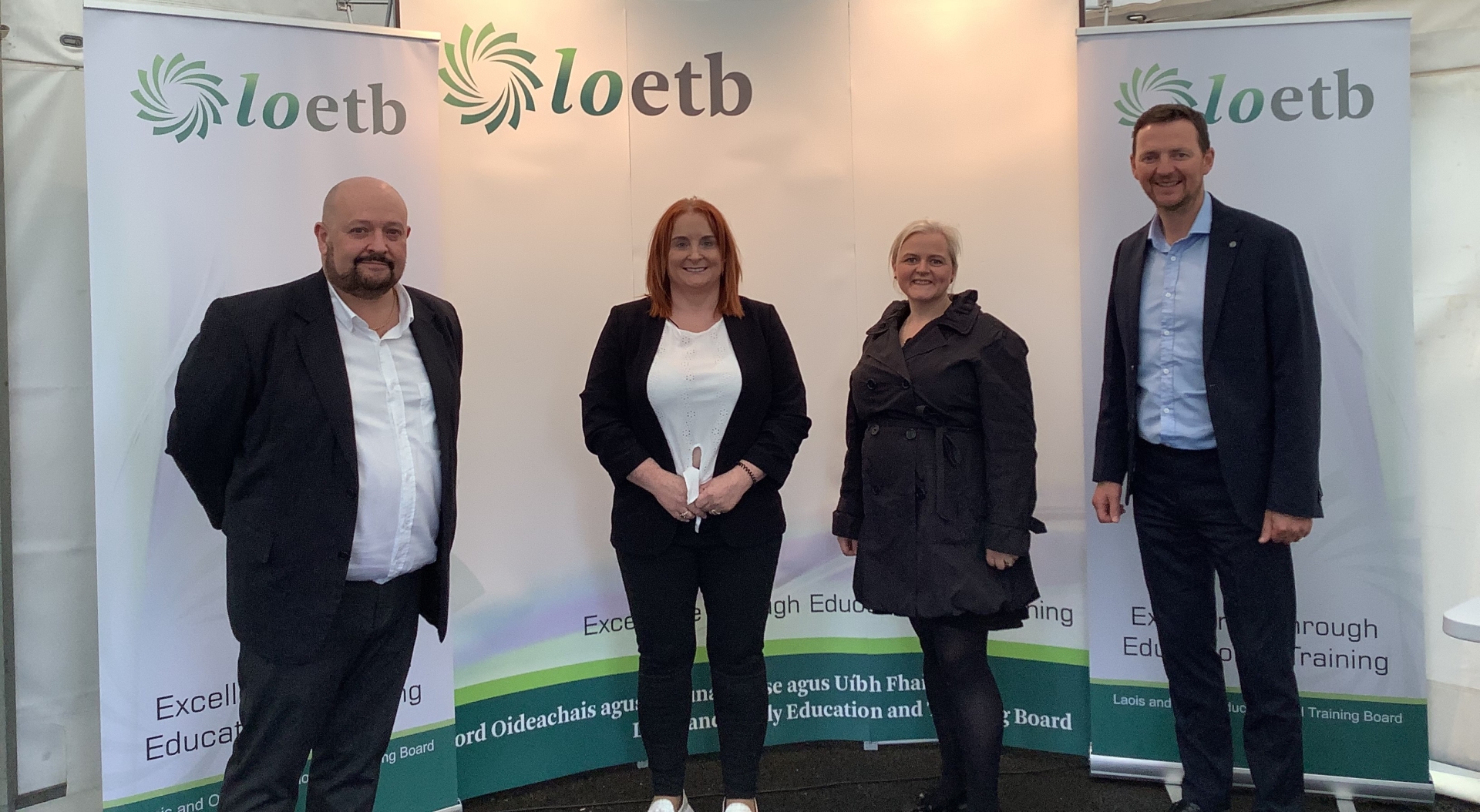 She urged all Travellers to seek help when needed. Sandra  went on to thank LOETB for marking this very significant day for Travellers with the planting  of a hazel tree.

Last year Traveller representatives launched the annual day at Áras an Uachtaráin and President Michael D  Higgins was presented with a hazel tree, a symbol of Travellers' strength, history and  resilience.

Since then other institutions and groups have planted hazel trees to mark the  day. LOETB is the first ETB in Ireland to plant the hazel tree in a show of solidarity with the Traveller community. 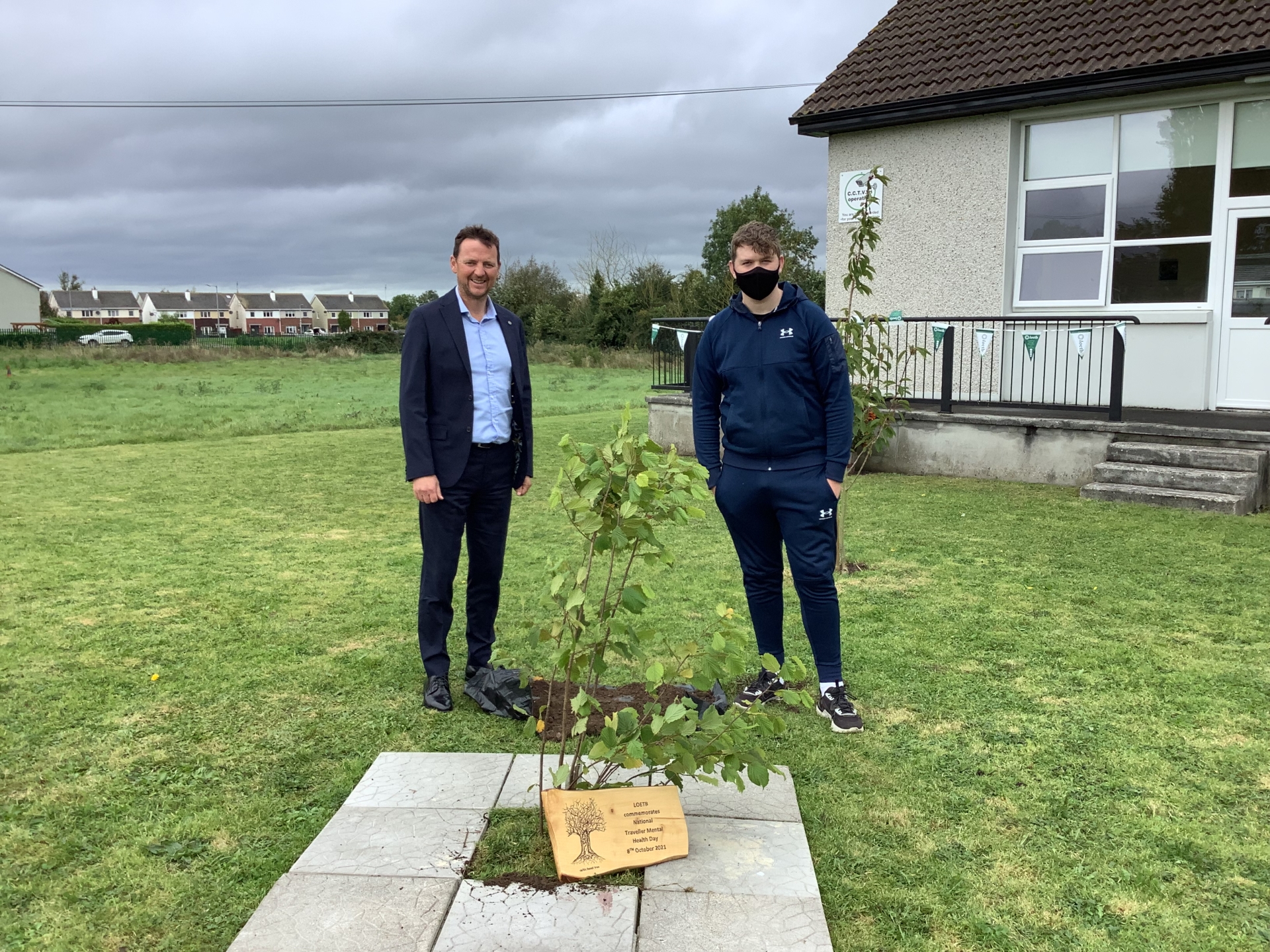 Sandra explained the significance of the Hazel tree to her community.

"In the past, when Traveller were legally permitted to travel, the branches of the hazel tree  were used to make the frame of our tents upon which the canvas sheet would cover," she said.

She added that the  hazel tree branches were also used in basket making and had many other purposes. Speaking at the planting she said the tree has now taken on an important new meaning.

"The hazel tree is planted here as a symbol of Travellers' strength, history, culture  and resilience," she said.

Sandra finished her speech to a large applause by urging the Traveller  students present ‘to be proud of who you are, stand tall, think big, keep learning, keep going  and reach your full potential.’

Following this two of the Traveller students, brothers Jim and  Ned Cash from Mountmellick FETC planted the hazel tree in a prominent position  in their centre garden.

Jim Cash, assisted by his teacher Rachel O’Neil, had spent much time  in the weeks prior to the event designing and making a striking wooden plaque to sit  proudly with the tree to explain its significance. Dermot Muldowney told everyone present  that these two Traveller students are part of a new documentary called Traveller Tales, which is currently on YouTube and receiving notable recognition both in Ireland and  internationally. 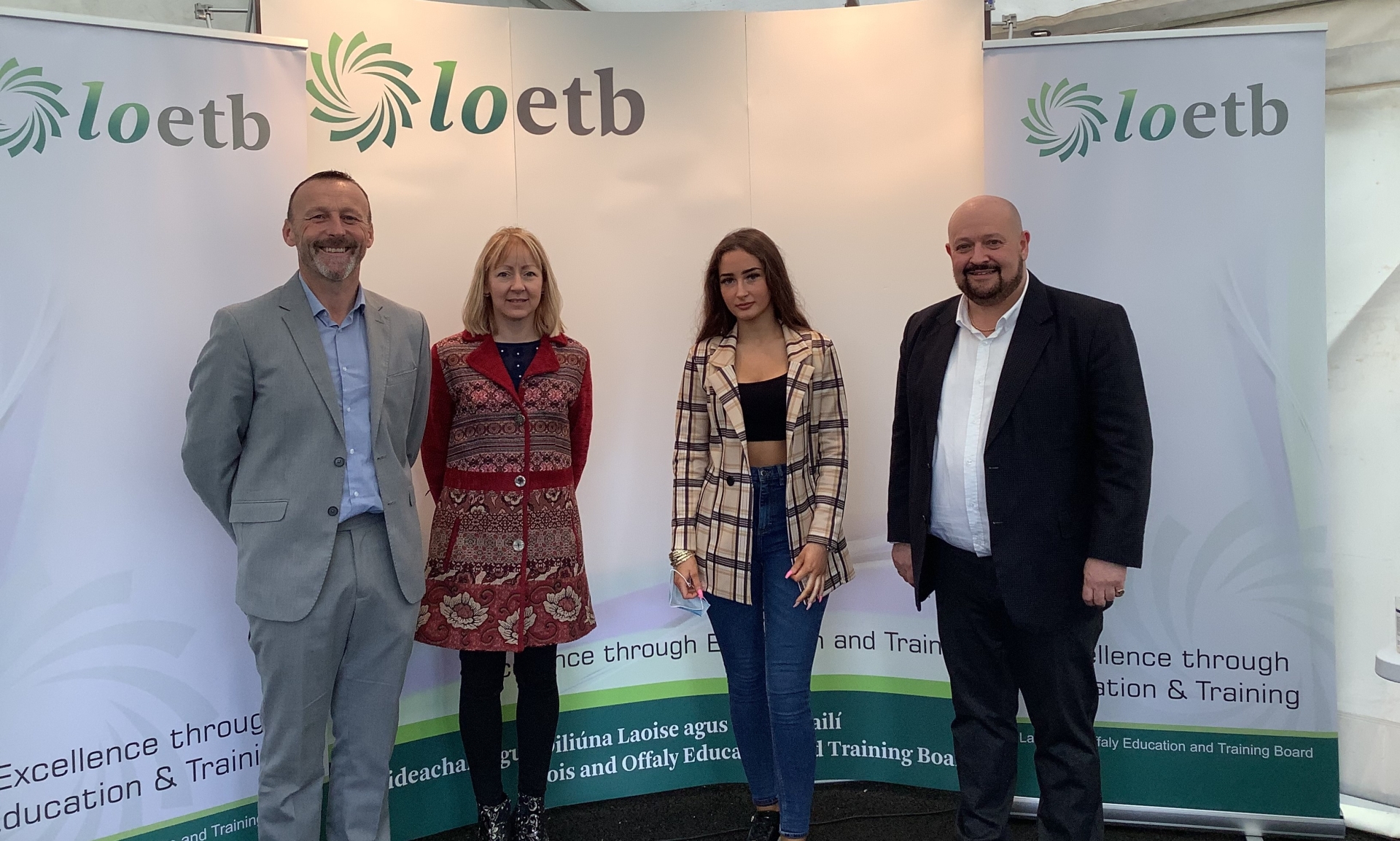 Dermot then invited Maureen McInerney, a Community Health Worker in  Laois Traveller Action Group to recite a poem, which was written by young Travellers in the  Offaly Traveller Movement youth club. The poem is about Traveller suicide as this was the  topic they wanted to explore given how much it impacts on their lives.

Finally, the event  was closed by Dermot introducing Annalisha Ward from Tullamore. Annalisha, who is  aged 16, closed the event with a beautiful and haunting song called Fiddler Dunne,  which tells the tale of a Traveller man, who is outcast and marginalized by society but how  he instilled in his children values of pride, justice and survival.

The kitchens in the  Mountmellick FETC were bustling and busy all morning preparing finger foods and  refreshments which were served in the gardens to all present.

The event was coordinated  by LOETB Community Training Officer Emma Gilchreest. Emma is the former Managing  Director of Offaly Traveller Movement and former Director of College Connect Access  Programme in Maynooth University, she has vast expertise of Traveller rights and Traveller  Inclusion.

"Although it was a serious topic matter on the day, it was  also a wonderful celebration of Traveller culture and talent. It was a very special day and  everyone really enjoyed it," said Ms Gilcreest. 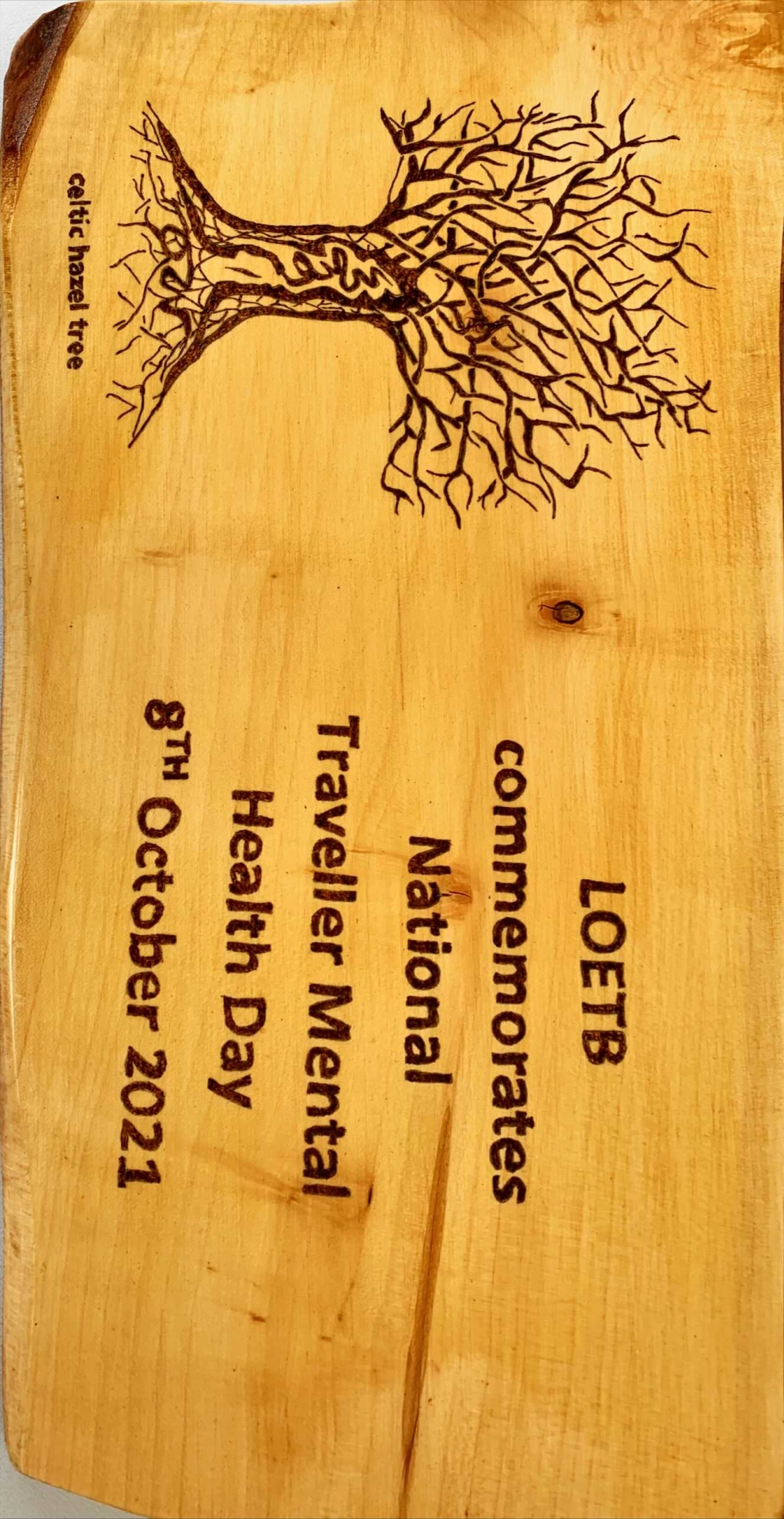