Man honoured for bravery for rescuing child from River Barrow 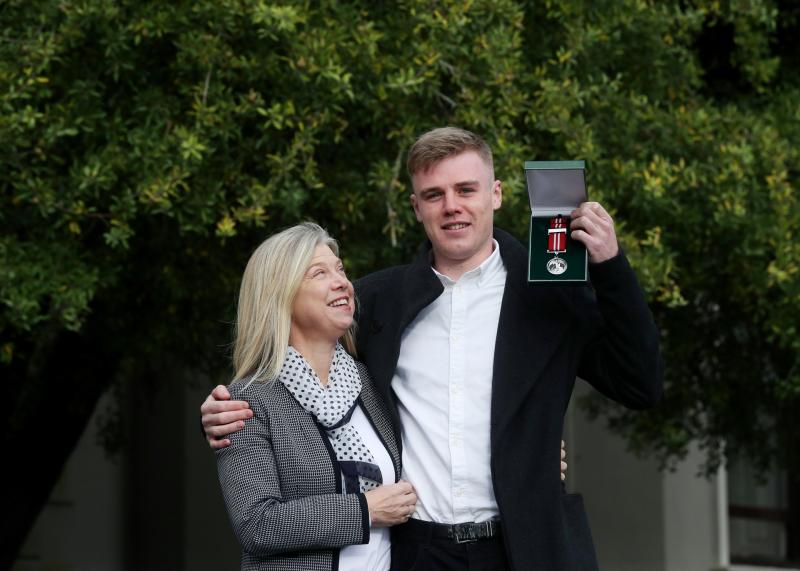 Scott McQuaid was awarded a Silver Medal for his actions in the rescue of a a young boy from a swollen river after a kayaking accident, River Barrow, Co. Kildare with his mother Diane Stanley

A young man who rescued a nine-year-old child from the River Barrow in Athy has been rewarded for his bravery.

Local Scott McQuaid aged 23 was awarded a Silver Medal and a Certificate of Bravery by the Ceann Comhairle, Seán Ó Fearghaíl at the National Bravery Awards.

On 28 February 2021, Declan Reid (34) and son Aaron got into difficulty when out kayaking on the River Barrow at Ardreigh Lock, Athy.

The kayak overturned in a very cold rapid flowing river which had burst its banks.

The father managed to scream for help and keep his nine-year-old son afloat.

Scott heard the screams and entered the water.

With his lifesaving skills he managed to get to the man and his son.

He succeeded in getting the nine-year-old to the riverbank after some 10 minutes of fighting a strong current.

At this stage the current had taken the man, and tragically his body was found several days later after a massive search.

The annual honours are awarded by Comhairle na Míre Gaile – the Deeds of Bravery Council – which was founded in 1947 to enable State recognition of exceptional Acts of Bravery. The Council is chaired by the Ceann Comhairle and includes the Cathaoirleach of Seanad Éireann, the Lord Mayors of Dublin and Cork, the Garda Commissioner, the President of the Association of City & County Councils, and the Chairman of the Irish Red Cross.  MORE BELOW PICTURE. 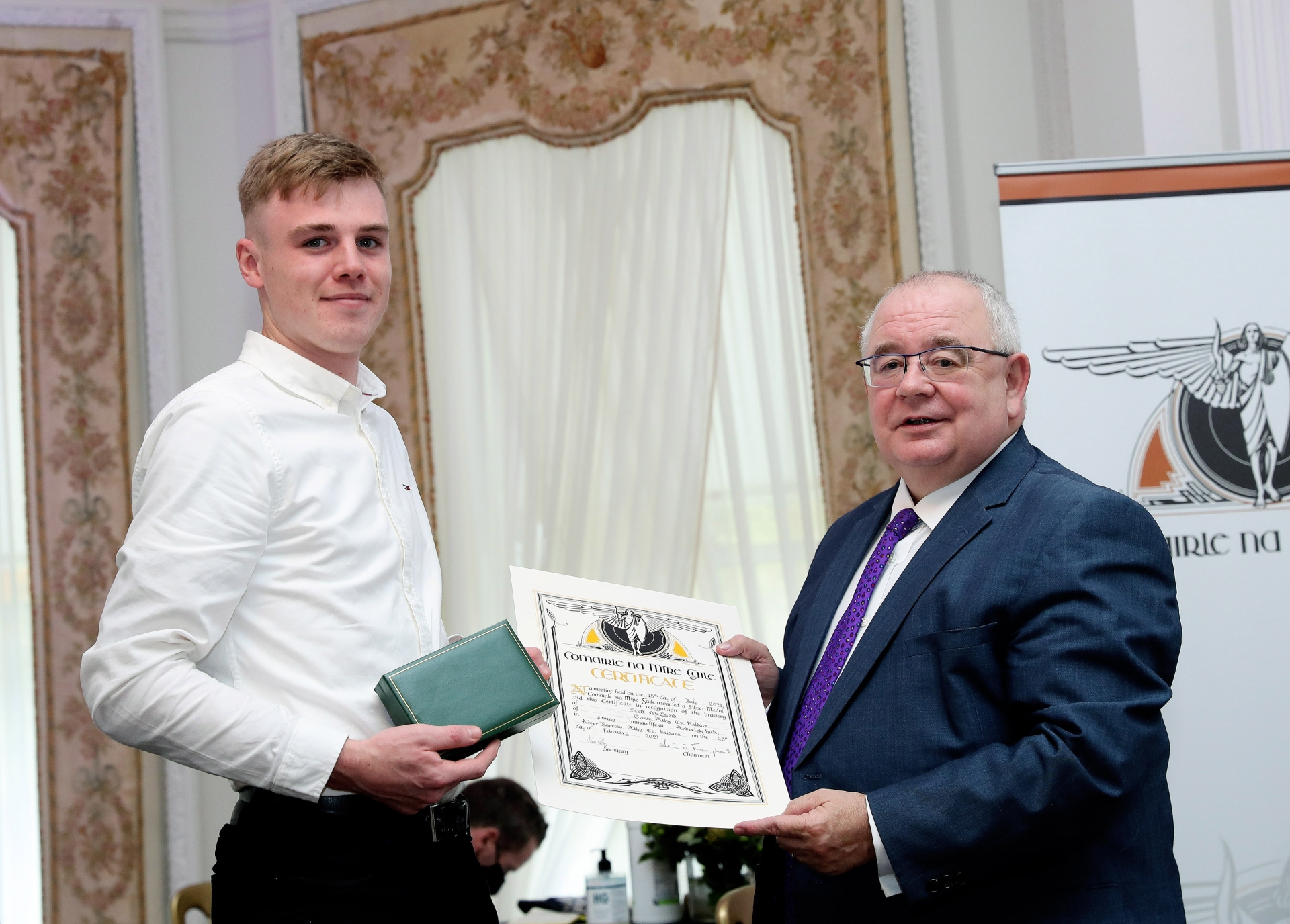 The Ceann Comhairle said: “The deeds we honour here are exceptional acts of bravery. They mark the moments where people saved the lives of others through their actions, risking their own lives doing so. What these awards celebrate is the noblest impulse within a human being, to risk their life in order to save another. We honour people who leaped into stormy seas, who braved swollen rivers, climbed down cliffs, assisted at road traffic collisions and performed other remarkable deeds. Through their actions there are people alive today, who would undoubtedly have died.

“I am of course conscious that we mark these deeds at a time when the world is still under the shadow of the COVID-19 pandemic. This virus has brought great pain to many families throughout the country and our hearts are heavy for the loss suffered over the last 20 months. But the exemplary service given by our doctors, nurses and frontline workers across the health service, the fire and rescue services and An Garda Síochána has brought great hope and also pride, to us all. 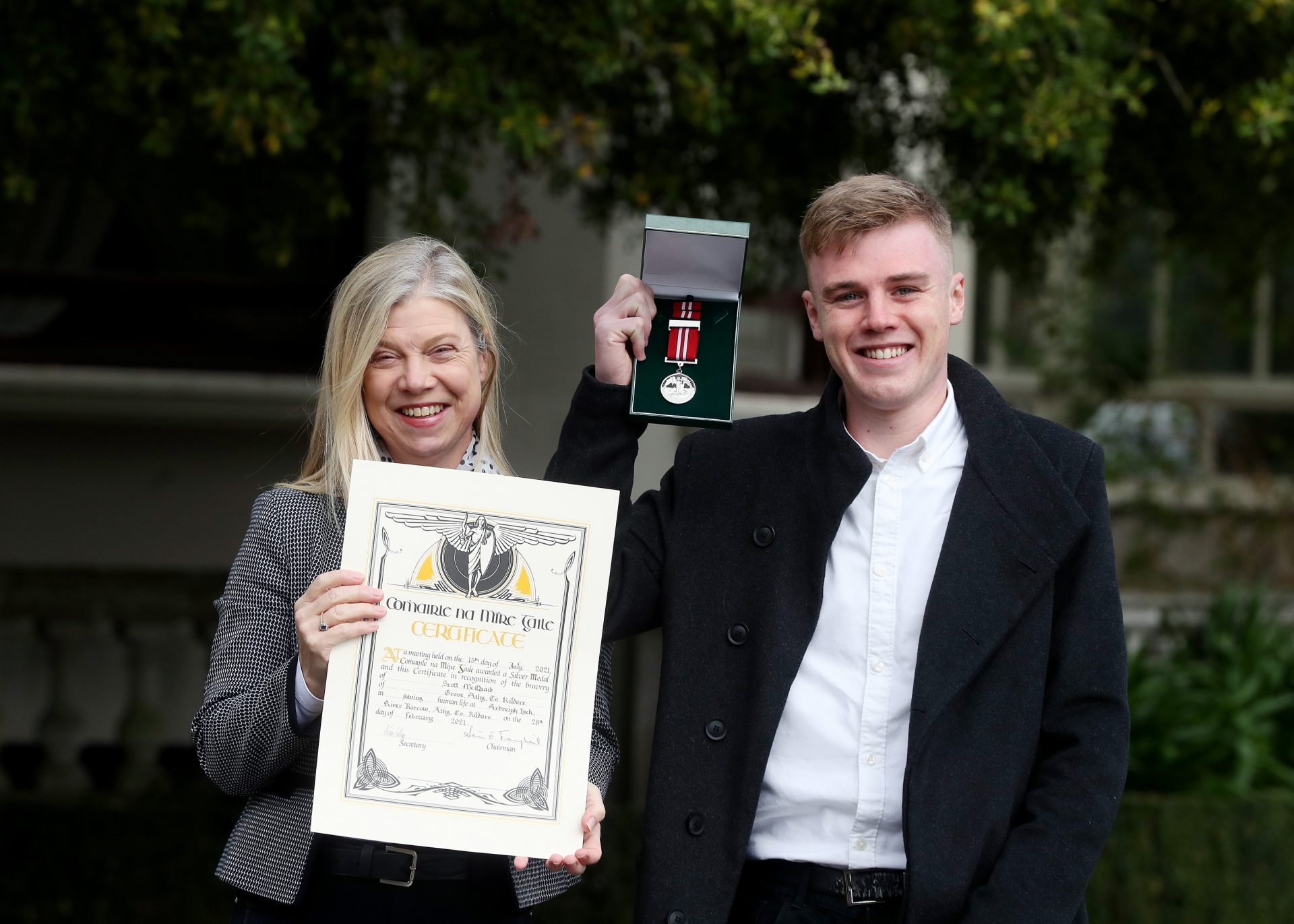 “Today we rightly acknowledge the brave acts of heroism that our honoured guests have performed. But it also a day for remembering and acknowledging the very many acts of bravery carried out day in and day out throughout the COVID-19 pandemic. However small or big those acts were and continue to be, collectively they contribute to keeping us all safe during an unprecedented time in our lives.

“The collective sense of good and indeed bravery displayed nationwide from many walks of life throughout the pandemic rightly allows us to be both proud of our communities and grateful for their existence. An Irish language expression whose literal meaning is 'It is in each other’s shadow that people live' but which, more broadly, invokes a sense of community and interdependence is most apt for the times we live in – Ar scáth a chéile a mhaireann na daoine.”

The Bravery awards were set up in 1947 to recognise those who risked their lives to save others and are administered by Comhairle Na Míre Gaile  – the Deeds of Bravery Council – which is chaired by the Ceann Comhairle.