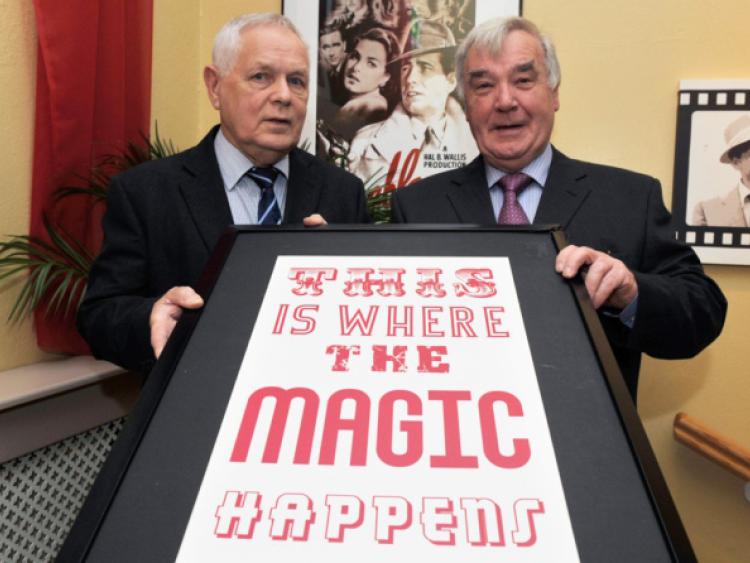 Memories of cowboys and canoodling were recalled in the Balcony Cinema last Wednesday in Mountmellick, which launched with The Quiet Man.

Memories of cowboys and canoodling were recalled in the Balcony Cinema last Wednesday in Mountmellick, which launched with The Quiet Man.

It was launched by PP Fr Micheál Murphy to a full house of invited guests.

“Brad Pitt, Meryl Streep or Nidge weren’t available so I was asked to step up. I have heard many yarns associated with the cinema, and if they were all true, it must have been a fantastic place,” he said.

The cosy 134 seat refurbished cinema is in Mountmellick Community Arts Centre, in what was the balcony of the old cinema.

The electric cinema began in 1918 in the Owenass Hall, moving to the new CYMS in 1951. Launched by President Sean T O’Kelly, it was owned by the parish. In its heyday queues were down the street.

“Tonight is one of those green shoots they talk about, two men long associated with community life, reviving ‘the pictures’, I hope our younger generation will have similar stories to tell, of romance and canoodling,” said Fr Murphy.

Michael Feely and Ger Lynch dug into their own pockets to revive the cinema.

“This week 43 years ago I came to Mountmellick. We have a great community here and I am glad to be giving something back,” said Michael, thanking Ger, the CE scheme workers and launch sponsors SuperValu.

“Tonight is a night for memories,” said Ger, recalling cowboys galloping onto the screen.

“Everybody hit their imaginary horse, no one had a gun but we could draw with the best of them, and we all fell in love with Doris Day,” he said.

“It is a great asset to the town, I hope the effort they put in is rewarded,” he said.