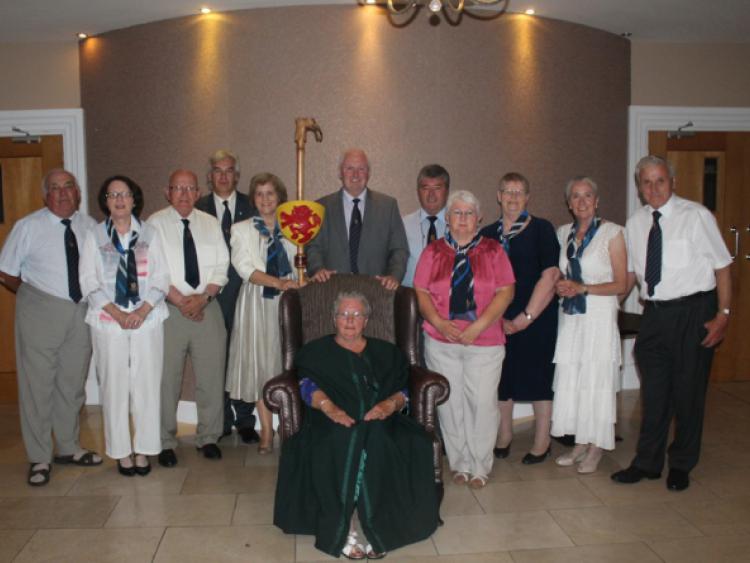 The 20th Annual O’Leathlobhair Clan Rally week-end got under way on friday 12th July ‘13 in a sun drenched Abbeyleix.

The 20th Annual O’Leathlobhair Clan Rally week-end got under way on friday 12th July ‘13 in a sun drenched Abbeyleix.

The A.G.M. of the clan took place at the Manor Hotel, Abbeyleix which was the base for the week-end. Chairperson Kevin Lalor-Fitzpatrick had a very warm cead mile failte for all and especially new members.

All the various reports were given for the year by the various officers and the nominations closed for the new Chieftan at the end of the A.G.M. Friday night’s gathering concluded with food followed by music supplied by Carlow native “Jack’s Music”.

Saturday morning saw the clan head off on a historical tour of Co. Laois comencing in Abbeyleix town at the famous Market House in the square, then on to Heritage House travelling on to their next stop in Raheen to visit the Lalor tomb in the village’s old cemetary where Honest Pat Lalor MP and his son Richard Lalor MP. Tenakill are laid to rest along with other family members, the group then proceeded to the homestead at Tenakill. The tour took them on to Coolbanagher Church, Emo Court and Gardens and the Rock of Dunamaise and other places of interest in the Portarlington area with a break for lunch at the Gandon Inn.

Tour guide for the day was the Heath’s very own Jackie Hyland who gave a very interesting and informative talk on the history of each place to all present.

After an early start and a busy day it was back to base to get ready for the highlight for many which was the Annual Clan Banquet and election of the new Clan Chieftan.

A large number of clan members and friends were present to enjoy a very tasty meal at the Abbeyleix Manor Hotel. Fr. Jack Walsh gave the blessings and the night was underway. Outgoing Clan Chieftan, Carlow native Aine O’Cathaisigh now living in Howth, Co. Dublin, her reign drawing to a close.

Clan Piper Pat Lalor of Carlow piped the new Clan Chieftan Mary Lalor from The Heath, who was a unanimous choice of clan members, into the ballroom followed by Aine, Mary had previously held the position of Chieftan in 1995 and 1996. Mary’s first task was to present certificates to the outgoing Chieftan Aine and also to Life Member David Lawlor from Killeigh.

Aine O’Cathaisigh presented a book of Art and Needlework and Research to Clan Secretary Annie Lalor and a new book on James Fintan Lalor to his direct descendant Clan Chairperson Kevin Lalor-Fitzpatrick.

All parties thanked Aine for her hard work and dedication to the O’Leathlobhair Clan during her twelve months in office.

Chairperson Kevin wished everyone a great nights dancing to Solitaire and praised the excellent hard working clan committee who will be commencing work soon on the 2014 rally when everyone else travels home to their respective counties and countries. Kevin welcomed overseas visitors from Darwin, Australia and England.

He thanked Laois Co. Council for their support with the Gathering which is such a special year in Ireland and thanked all for attending and continuing to support the clan. Members could re-live the past clan rallies viewing the clan scrap book. Various souveniers were on sale. Also, the James Fintan Lalor Inaugral School which takes place on 20th and 21st Sept. 2013 was highlighed and information leaflets were available and distributed on the week-end. Josie Dunne gave all present a rendition of her song James Fintan Lalor composed by the late James Lal Deegan and his sister Cannie Deniff much to the delight of all present and James Carroll caught the event on camera and dvd. Diarmuid O’Cathasaigh performed the O’Leathlobhair chant on harmonica.

Sunday saw the week-end close with the annual church Ecumenical Service in the Church of the Adoration, Abbeyleix with a very special thanks to Very Rev. Fr. Ger Ahern P.P. The largest gathering in years attended this event with prayerful contributions from members.

Clan Chieftan Mary Lalor did a reading and Ita Culleton played keyboards, Diarmuid O’Cathasaigh gave a lovely rendition on the harmonica of How Great Thou Art and all adjourned for a farewell lunch at the Manor Hotel.

All in all it was another successful O’Leathlobhair Clan week-end drawn to a close in a very warm and sunny Abbeyliex.

Past Clan members and friends who are sadly no longer with us were remembered and especially Mary Lalor, Camross, may the light of heaven shine upon them all.