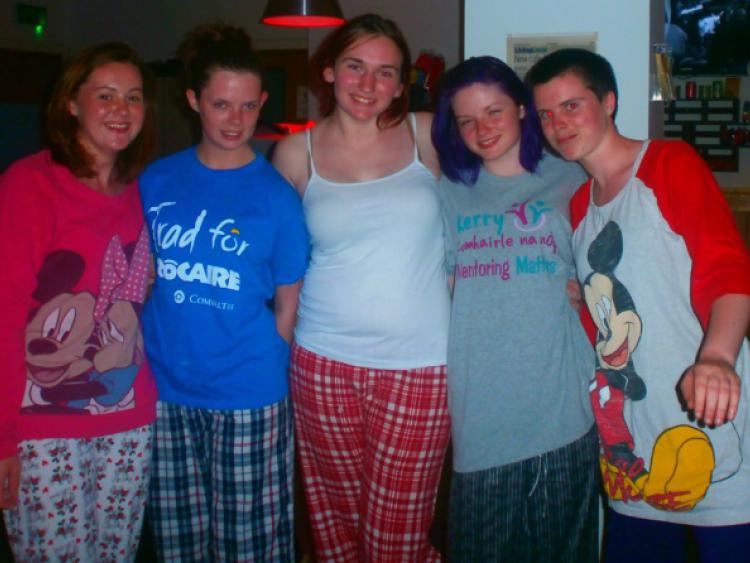 Teens like their sleep so a big sacrifice indeed was made by 16 members of Portlaoise Youth Café last Tuesday when they held a Stay Awake fundraiser.

Teens like their sleep so a big sacrifice indeed was made by 16 members of Portlaoise Youth Café last Tuesday when they held a Stay Awake fundraiser.

The event was held in their club over the Subway restaurant, and despite the warm night, they had lots of fun while managing not to fall asleep, all well minded by their volunteer leaders.

The night began at 10pm with music by Damage Assessment, Joy Turley and Tucker & Corey.

Good old fashioned games like Twister, karaoke sesssions, movies and a pizza delivery kept them going until 8am Wednesday morning.

Volunteer leader Serena Donovan was one of those doing shifts to stay with the kids.

The money raised will go towards running costs and band equipment, as many members have a keen interest in music.

A big summer event is planned for August, with bands and DJs, and two music projects are underway; a bands competition, and a project with Joe Salmon called ‘I want to be in a band’.

They also regularly hold ‘Open Mic’ nights for anyone to try, not just members.

Next October they will run a mental health awareness programme, Imind, in conjunction with Laois Connects. Guest speaker will be retired prison governer John Lonergan.

The club began last October and already have about 170 members.

“There is a real need for young people to have a safe, inclusive space they feel they belong to, and have control over. It is run by them, and the volunteers are there to support them,” said project manager Joe Thompson.