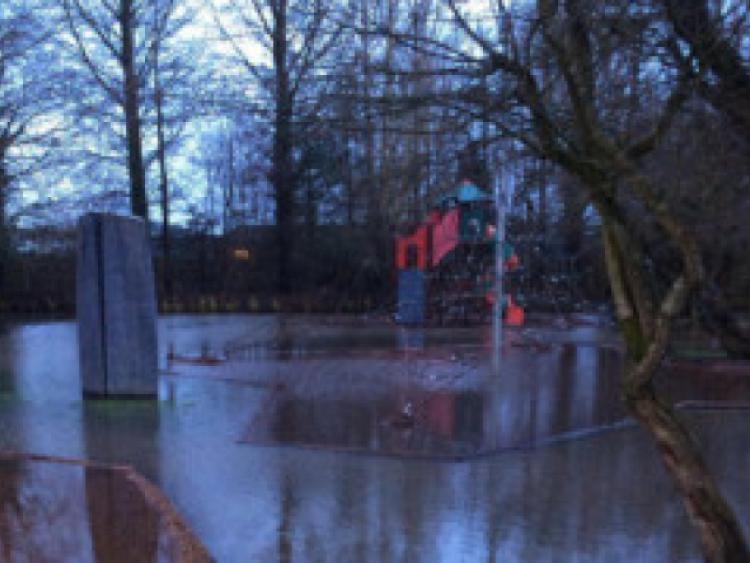 Severe flooding threatens the residents of Mountrath once again as water levels rise in the Whitehorse River due to the stormy weather.

Severe flooding threatens the residents of Mountrath once again as water levels rise in the Whitehorse River due to the stormy weather.

No houses have yet to be affected but the children’s playground was left completely under water last week.

Councillor John Whelan said that a small section of the river needs to be cleaned as soon as in order to prevent flooding.

“Silt and sand deposits have built up at the bridge since it was last cleaned in 2008. This is an obstacle for the increasing volume of water that is running through the town.

“It’s not a big job, but it needs to be removed before the river bursts its banks,” he told the Leinster Express.

The operation cannot take place without the permission of the National Parks and Wildlife Service, who want to protect the natural habitat of the wildlife in the river.

“They care more about the fish than they do the people.

“We’re not looking to remove the bed, we just want to let the water flow. It won’t affect the wildlife in any way,” he said.

The river underwent a major dredging job in 2008. Previous to this the town suffered from severe flooding every year in the heavy rain.

“You can see the water coming right up to the bridge, and it’s very close to flooding again.

“It’s not fair on the locals. After the last major flood some people never moved back into their homes. The damage was so bad and they were too afraid,” he said.

Kieran Keogh, Director of Services at Laois County Council, said that the river would be cleaned this year.

“We have started the process of engaging with the National Parks and Wildlife Service. We can’t clean the river until we have their permission, but we’re putting the pressure on them.

“Of course the weather is another issue too, so we may wait until that settles. It will definitely be cleaned this year though,” he told the Leinster Express.

The Council and the Civil Defence were in Mountrath last week providing the locals with sandbags, and flood barriers were also put in place.

“Our main priority is to protect the people,” Mr Keogh said.