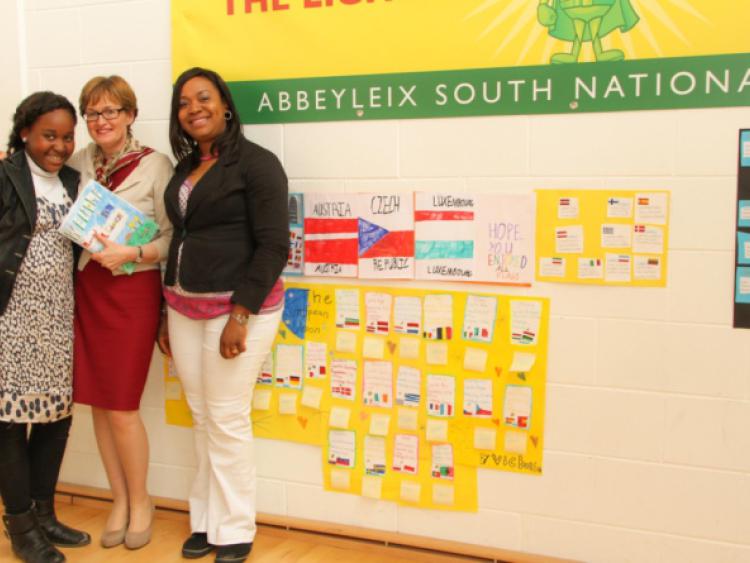 Mairead McGuinness visited the South School in Abbeyleix on Friday April 11 where she met with pupils, teachers and parents.

Mairead McGuinness visited the South School in Abbeyleix on Friday April 11 where she met with pupils, teachers and parents.

She visited each classroom and spoke with the children about her role as an MEP and about her job in Brussels and in Strasbourg.

She answered lots of questions from enquiring minds.

Pupils from second class up to sixth class had been studying the European Union and had completed projects over the past couple of weeks based on the EU and the 28 countries which are part of the EU.Mairead spent time viewing their work on the EU, which they were thrilled about.

Following her time with the children in their classrooms, they all headed outside and Mairead planted a pendunculate oak tree, kindly given to them by Sir David Davies and the estate manager, Ross Irvine.

It is a beautiful specimen which they grew from an acorn from the Park Hill woodland on the estate.

Park Hill is home to the oldest oak tree in Ireland which is between 500 and 700 years old.

Following the planting of the tree, the school’s parents’ association served refreshments in the GP hall.

Each child, 84 in total, got to take home a pendunculate oak tree kindly donated by Green Belt.

Mairead is a longtime friend of the Talbot family who are very well known in Abbeyleix.

Principal Ruth Wallace said that the day was a great experience for the children and adults alike. She also told the Leinster Express that the school really appreciated the visit from Mairead, especially as this is such a busy time for her.

“We had a delightful afternoon and were honoured to have Mairead McGuinness MEP visit us”.