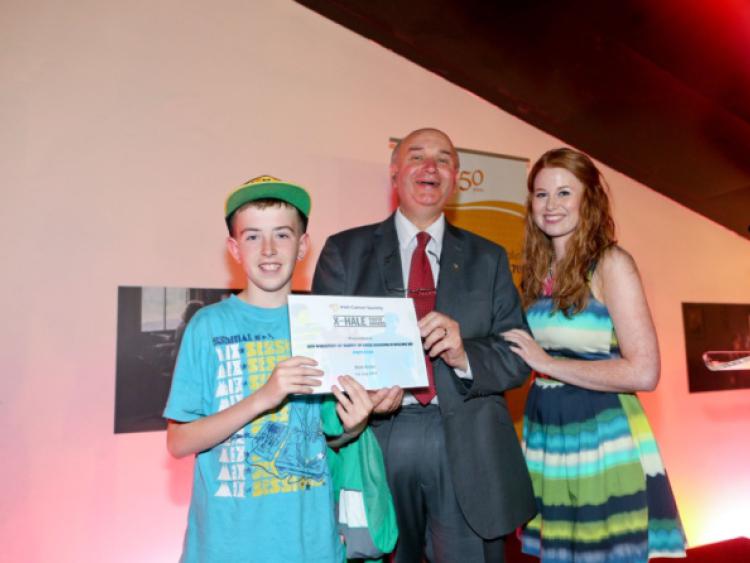 Port GYDP from Laois was announced as winner of the Award for Best Actor at the Irish Cancer Society’s X-HALE Film Festival 2014.

Port GYDP from Laois was announced as winner of the Award for Best Actor at the Irish Cancer Society’s X-HALE Film Festival 2014.

The group were recognised for Ben Wheatley’s role as ‘Happy’ in their film ‘Your Smoking is Killing Me’.

In total, 43 youth groups from around the country attended the event which took place at the Lighthouse Cinema in Smithfield, Dublin last week. The 14 awards were decided by a judging panel which consisted of representatives from health promotion, film and entertainment industries. Hundreds of young people gathered at the Festival to view the 47 films being showcased on the big screen.

With each short film focusing on the issue of smoking, overarching message from the young people was that the next generation is seeing through the smoke screen of the tobacco industry.

The X-HALE Film Festival is part of the Irish Cancer Society’s X-HALE Youth Awards, an initiative which aims to empower young people to create awareness around the issue of smoking in their own communities. Today’s national event follows months of hard work by the youth groups in devising and producing their own films.

The films projects from the X-HALE Film Festival can be viewed online, visit http://www.cancer.ie/xhale or www.facebook.com/XhaleYouthAwards.

The X-HALE Film Festival is an Irish Cancer Society project in partnership with the National Youth Council of Ireland (NYCI).

Anyone who is looking to quit smoking should contact the National Smokers Quitline on 1800 201 203 or visit www.quit.ie for information and support.