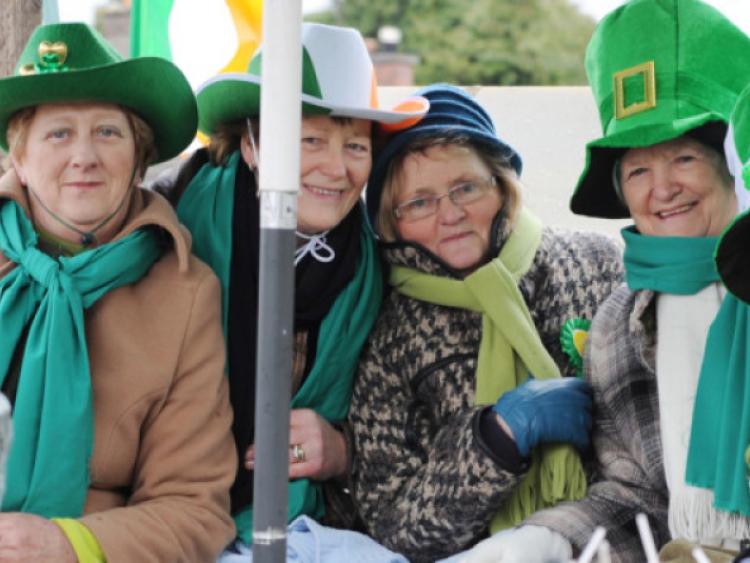 The sun came out and the crowds mushroomed out of doorways and shops when heavy rain ended just as Mountmellick’s colourful parade meandered through the town.

The sun came out and the crowds mushroomed out of doorways and shops when heavy rain ended just as Mountmellick’s colourful parade meandered through the town.

There was plenty of flag-waving and crazy-hat-wearing to mark the national holiday.

A slightly sodden St Patrick in sandals waved his staff at the crowds, followed by the rat-a-tat of St Joseph’s Pipe Band.

But the day belonged to the children, many of them in springtime costumes, like the Naonrai, bright as multi-colour buttons, and the cheerful Ladybirds under umbrellas rather than leaves.

Trailer-loads of young sportspeople cheered for their own teams.

“Mountmellick” was the energetic chant of the local u-6 and u-8s as they tapped their hurleys, glad of their helmets to keep dry.

The ‘mighty, mighty’ O’Moore’s camogie girls were up for the day, the Rock GAA were ’on fire’, and Laois Martial Arts kickboxers and Taekwando students in bright blue geansais thumped time with their hand pads.

An Easter bunny kept Kilcavan’s GAA players company, while a local paint company’s array of bright balloons were released to the joy of the crowd.

The young farmer’s organization hauled a psychedelic advertisement for the Emerald City in its upcoming show, the Wizard of Oz.

But the Countrywomen’s Association was more concerned about the state of this emerald nation.

The ladies chatted, safe from the elements under their tiny green gazebo, but their placards sniped at taxes and banks.

Mountmellick YDC were a chirpy presence, as were the supporters of Pieta House’s up-coming Darkness into Light walk in their sunny yellow t-shirts.

A number of locals were unimpressed by the political use of the tricolor by one group and the presence of three young men on quads who wore balaclavas.

It was the only negative on relentlessly optimistic day, and it’s an issue the organizing committee say they will investigate.

Large crowds gathered in the Square and milled through the craft market which looks like becoming a welcome addition to the town’s future celebrations.

The inclement weather however, meant that more children entertained themselves on the Bumble Bus than the huge slides and bouncing castles.

Ms Whelan, who is also on the St Patrick’s Day organizing committee, said she was absolutely delighted with the turnout, and paid tribute to those who had been up early decorating the Square, and people who adorned their homes and businesses with flags and bunting.