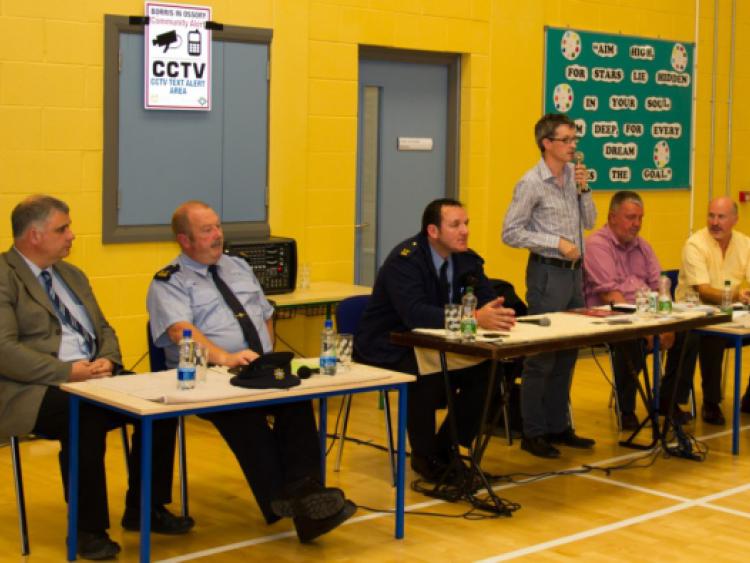 The community alert in the Borris-in-Ossory area have just launched their text alert scheme to tackle crime in the village and sournding areas.

The community alert in the Borris-in-Ossory area have just launched their text alert scheme to tackle crime in the village and sournding areas.

The committee held a meeting recently which saw over 100 people show up.

Many locals have already signed up to the text alert scheme which covers a number of areas around Borris-in-Ossory including Ballaghmore, Killasmestia and Knockaroo.

At the meeting both the local Gardaí and Muintir na Tire representatives spoke about the scheme which is running successfully in a number of other areas.

Speaking to the Leinster Express committee chairman Noel Dooley said that he hoped the scheme would make people more aware of unusual activity in the area.

“We hope it will bring people together and get them watching out for things they may not have been. There have been a lot of break ins in different parts of the area”.

“There is a big catchment area that stretches as far as Errill on one side and up to Camross on the other. There were over 100 at the meeting which is a reflection on the way things have gone”.

He said that the community alert also provides a number of other services in the area including alarm pendants for older people but they are currently focussing on getting the text alert up and running.

“The Garda station is seldom open in Borris and with Abbeyleix station closing at 9pm, Portlaoise is the nearest station.

“But they have a lot of areas to cover so we are trying to be self sufficient here. It seems to be working well in other communities.

“We are trying to get mobile users on board who could then contact people who may only have a landline,” he said.

As well as Borris-in-Ossory, Shanahoe community alert are planning to install security cameras in their area.