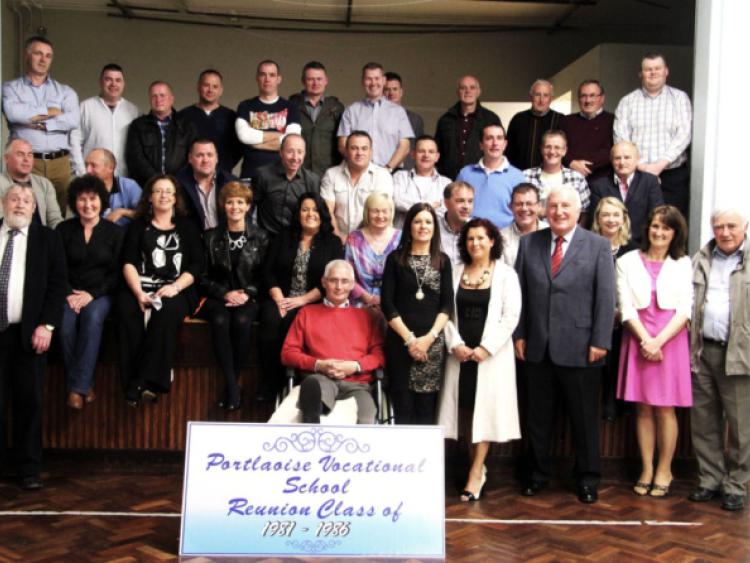 Good and bad memories came flooding back to former pupils of Portlaoise Vocational School when they held their reunion on Friday October 4.

Good and bad memories came flooding back to former pupils of Portlaoise Vocational School when they held their reunion on Friday October 4.

Tech students from 1981 to ‘86 took a step back in time as they toured their old school on Railway Street, recalling being sent to the office of principal Michael Parsons, as well as many much happier memories.

The now retired principal joined them as well as other teachers and secretary Marie Gleeson who is still secretary of what is now Portlaoise College.

Also attending the reunion was former student Noel Delaney who never really left at all, as he is now the principal of Portlaoise College.

“The school had changed but the rooms were in the same place, like Mr Parson’s office, we all remembered being called there. It was gas, it felt much bigger when we were 13-year-olds,” she said.

Everyone who had begun their education in 1981 was invited.

“In those times a lot of people got a job and left school early, There were always a lot less girls, and at the reunion there were only seven of us,” says Alice.

Now in their forties, many of the students had to be introduced to each other, but everyone recognised the teachers.

Pupils who had sadly passed away were remembered, as were the late vice principal Bill Phelan, caretaker Bill Dunne and teacher Rita Fingleton.

The group of 41 were afterwards welcomed next door to O’Loughlin’s hotel, to enjoy a free disco with finger food, ensuring a great night was enjoyed by all. It was the first time the school had a reunion. Alice is planning a repeat for the 30th anniversary of their Leaving Cert in three years.

“It was a smaller crowd that we had hoped, but the reaction was so positive that we are hoping to have another. Everybody was delighted to have a reunion, including the teachers. We all shared wonderful memories, everybody who went really enjoyed it,” she said.