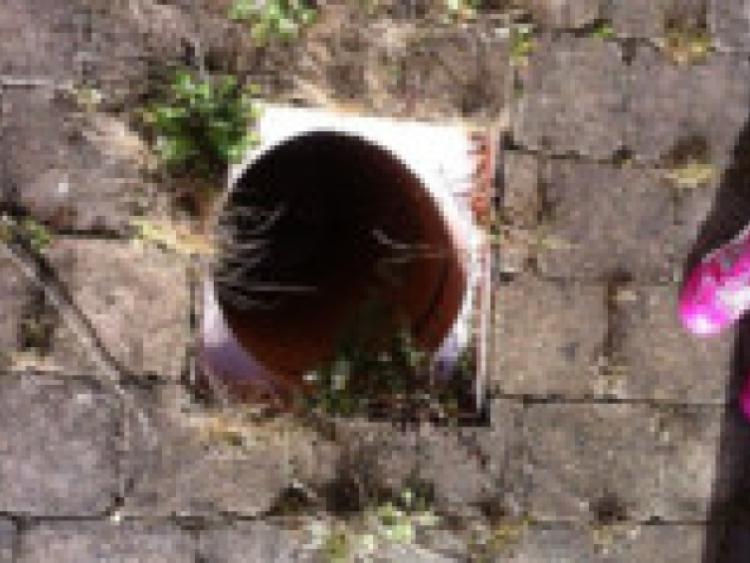 These are just a few of the problems facing the residents of Corrig Glen in Portarlington, an unfinished developement consisting of three duplex apartment blocks, which was opened in 2006.

As the storms swept through Laois on the night of February 12, the whole roof of one of the blocks lifted off. To this day it still lies there on the grass, just another attractive feature of this estate.

“I was in my mother’s that evening and I said joking “I better go now, check and see if this house is still in one piece!” Little I knew it was falling apart when I got home,” said Edel Coleman, a resident of Corrig Glen, who paid €230,000 for her home back in 2008.

The extent of the leaking damage done to Ms Coleman’s apartment has deemed it beyond repair. With no roof to protect the building, her apartment didn’t stand a chance during the heavy rainfall. Only one room remains to have its ceiling intact.

“All my belongings are in bags and I’m now sleeping on my mother’s couch,” she told the Leinster Express.

Where the problem lies for residents like Ms Coleman is in the “dodgy developers” of Derrycorris Construction, who reassured these people that an apartment here would be a wonderful investment.

“Ciaran Linnane is one of three developers. The others legged it and left him to carry the can,” said Sinead Maher, who was forced to leave her apartment due to anti-social behaviour.

Linnane tried to charge the residents a management fee of €1,200 each to cover insurance, lighting and general maintenance. When the residents got a better quote themselves of €650 they contacted Linnane to bring it to his attention, all of which he now denies.

“My brother rang Linnane after the roof came off, because he won’t talk to me. “They wouldn’t cough up the management fees, and now it’s biting them in the arse,” is what he said to him over the phone,” said Ms Coleman.

The management company, owned by the developer, dissolved in 2011, leaving the residents to fend for themselves.

“NAMA can’t help us because Linnane is feeding them lies, pretending it’s all under control. If he pulled out completely then maybe we’d get somewhere,” she said.

Ms Maher bought her apartment in 2006 as a family home.

“For months a squatter lived a few doors down from me. The guards knew and left him. People were coming in at night and lighting fires. I just had to get out of there with my kids,” she said.