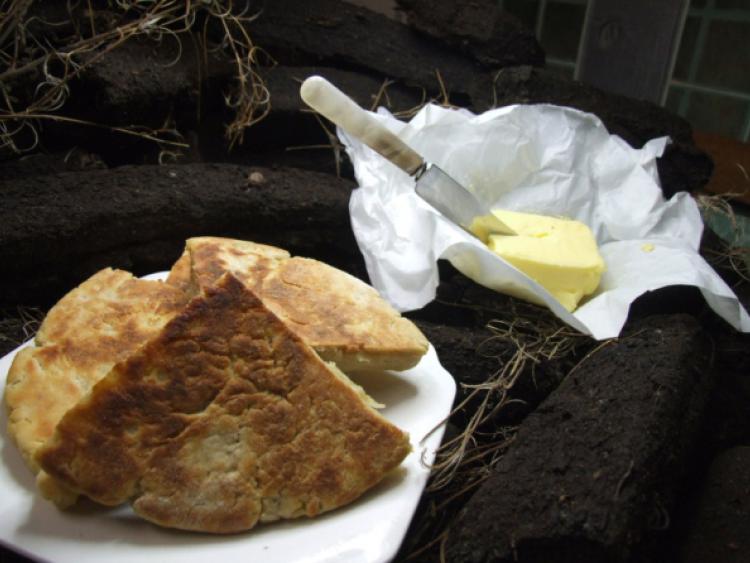 “Heat is Half Your Food”, is part recipe, part photography book, with each shot carefully set up and photographed by Doreen in Camross bog.

“This is a dying way of life. As the ban on turf cutting tightens and oil, gas and electricity take over homes, it will be forgotten forever,” she says.

The artist grew up in Birmingham, but her roots are in Camross, where her grandmother Catherine Foy (nee Mortimer) was born.

“My grandmother used to say ‘Heat is half your food’ meaning it’s better to be warm and hungry than cold and hungry. I am trying to get across the memories of those who have been to the bog and drank tea, not out of a flask but out of a glass bottle kept warm in a sock. It’s a memory to pass on to those who will never eat a guggy egg boiled in a kettle on an open fire,” she says.

One photo is of a statue of the virgin Mary, discovered intact inside a piece of machine cut turf. Another of a tea caddy got over 2,000 likes on Doreen’s facebook page Bogcotton, many from New York.

The book includes traditional recipes like potato cakes and rabbit stew and is ready for printing.

Having had no success getting sponsorship from government agencies, Doreen is using the website Fundit.ie to raise the €4,000 needed to print 1,000 copies.

Supporters can donate €10 upwards, and get a copy of the book with their name printed inside. Some will also get a piece of Doreen’s resin art.

There are eight days left to help. See www.fundit.ie/project/heat-is-half-your-foodby-doreen-burkei