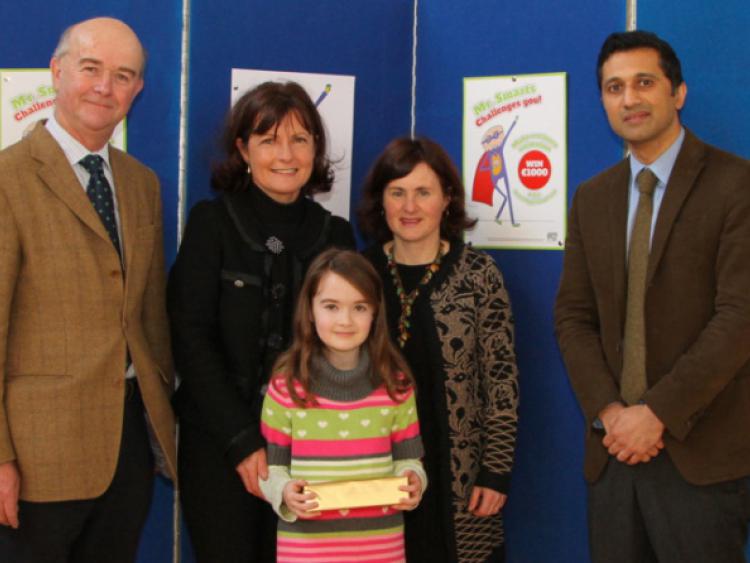 Laois schoolgirl Sarah Talbot, who lives in Ballacolla and is a pupil of Abbeyleix South National School, is the overall winner of the Si-Fi ‘Dublin Nerds’ national competition which aims to increase public awareness of brain diseases.

Laois schoolgirl Sarah Talbot, who lives in Ballacolla and is a pupil of Abbeyleix South National School, is the overall winner of the Si-Fi ‘Dublin Nerds’ national competition which aims to increase public awareness of brain diseases.

The innovative competition, which is funded by the Health Research Board, is the brainchild (!) of academic Kumlesh Dev, a professor in Neuroscience in the School of Medicine in TCD who travelled to the South School in December to present Sarah with her prize of a mini iPad.

The competition was open to primary schools and pupils were asked to create an image of a brain superhero. Sarah’s winning entry was called ‘Mr Smarts’, whom she describes as “a skinny superman; doesn’t use his limbs much but is bursting with brains!”

Sarah’s superhero ‘Mr Smarts’ is now the mascot of Frontiers in Neurology Ireland (neurologyireland.com) and is also being used to promote and advertise the second phase of the competition to create an animation of a biological process of a brain disease which, ideally, will involve a scientist and a computer expert working together.

“We want to improve engagement with the general public,” said Professor Dev who believes that cartoon and animations offer considerable potential for scientists to bridge the communication gap and spread information about complex biological mechanisms.

Nine year old Sarah is in 4th class and, as well as winning a mini-iPad for herself, she has won for her school a range of age-appropriate scientific equipment, including a human model. Sarah was delighted with her success in the competition. With 84 students and three mainstream teachers, students of the South School consistently perform well in local and regional art competitions.

“We are so excited that Sarah has been chosen as the overall winner,” according to school Principal Mrs Ruth Wallace. “Competitions like this allow children to use their imagination. We encourage creativity in all our children; it is fulfilling personally and who knows where it will take them further down the road.”