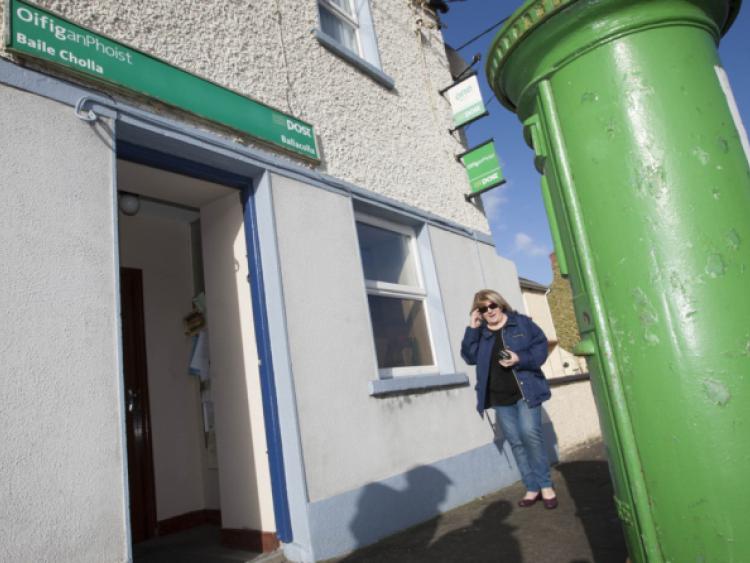 Speaking at a meeting in the village last week, An Post representative Angus Laverty told residents that a consultation process is currently underway, and interested parties can make submissions on the Post Office until April 14.

“An Post have not made any decision about the future of the post office. I know this is very frustrating for you, I can’t give you something to work with, all I can do is listen to you. The decision will be informed by what you say tonight”.

He told the packed St Patrick’s Hall that the four main criteria for keeping a post office open when a contract has finished are level of coverage, level of business in the area (past, present and future), access to other post offices, and the capacity of other local post offices to deal with the business.

He added that as well as these economic factors, An Post also considers non economic arguments, including the case put forward by the local community. “No criteria is given more weight than any other, it is an interplay of all four”.

He added that this consultation process has worked well in other parts of the country, and said that An Post “won’t cut off” anyone who comes forward now with a plan to continue the post office.

“It is more than just a post office, it is a hub in the area, and a huge amount of people do their business there on a daily basis. The village will die on its feet if we continue to lose services. Rural life is in danger of dying on its feet”.

Michael Gorman, who recently retired as director of Laois Down Syndrome, said that locals with intellectual disabilities would be badly affected if the post office closed.

“There is not a post office between here and the top of the mountain. Tesconomics is a modern thing now, they want to move it all to Tesco. There are plenty of good business people in this area that could and would take it on”.

Local resident John Finlay said that the post office has a huge amount of services for people.

“The strong message here is that the post office leaves a heart beating - this parish is alive and well and we take pride in our post office. We’ll do everything to help you fight our battle”, he told Mr Laverty.

Sean Fleming TD said that he was worried about what would be left in rural areas if the post office closed.

“It is important to retain as many facilities in rural areas as possible. My only concern is hearing there are trial runs with Tecso and some supermarkets”.

He added, maybe people in the locality or in the wider area around Ballacolla would like to come forward to take over the business.

Brian Stanley TD told the audience that the business of the post office has to be broadened.

Charlie Flanagan TD also spoke at the meeting, and told the large attendance: “the fact the three TDs are here is indicative of our support for this. I’ll pledge my support for the community, you can count on me to be with you for this one”.

Speaking to the Leinster Express after the meeting, Mr Laverty said that An Post already had received a number of submissions. Submissions must be made before Monday April 14 to Pat Cremin An Post, Regional Office, Coote St, Portlaoise or contact 01 7058852.