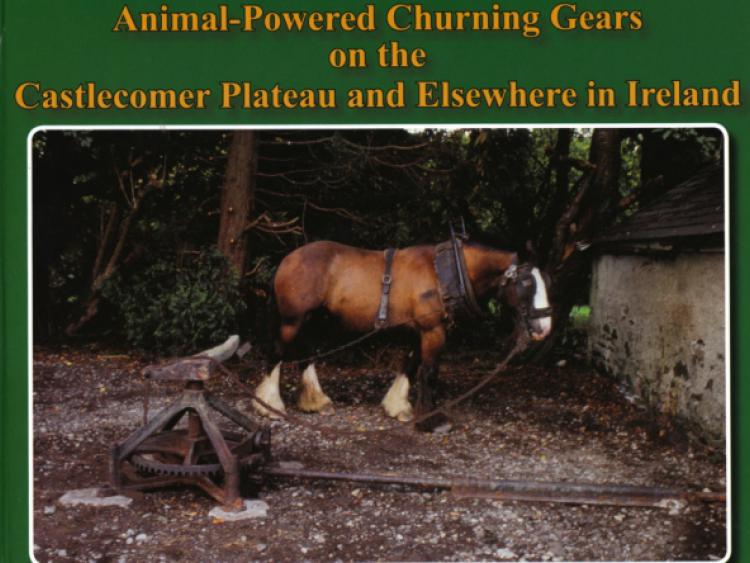 Churning was a chore dreaded by many farm families. Making butter with dash-churns or end-over-end churns took a physical toll and was time consuming.

Churning was a chore dreaded by many farm families. Making butter with dash-churns or end-over-end churns took a physical toll and was time consuming.

Some people, though, found a solution - by letting animals do the work with churning gears either made of wood or cast-iron.

A wooden gear, for example, was used in Andrew Daly’s farm at Fossy Upper, Timahoe. A donkey or horse was the power-source and was blindfolded to prevent it getting the “staggers” from continually walking in a circle.

The Dalys sold salted butter to local trader Arthur Kerr and to shops in Abbeyleix and Athy and, in later years, to Cornelius Dennehy, the Cork butter buyer. He had a tragic end. He was murdered near The Swan.

Ah, country butter. Many older people still long for it, but to modern palates it would probably taste strange, even exotic.

Esoteric rural subjects are Michael J Conry’s speciality. ‘Animal-Powered Churning Gears on the Castlecomer Plateau and Elsewhere in Ireland’ is the title of his latest book which he co-authored with statistician and research chemist Brian S Coulter. They were colleagues in An Foras Talœntais (Agricultural Institute).

When compared with the surrounding hinterland and the rest of Ireland, the Castlecomer plateau had an extraordinary number of animal-powered churns.

This, explains the authors, was because the plateau was unsuitable for tillage. As a result, farmers specialized in cows and butter-making. To reduce the workload, they installed churning gears.

These came in two forms: wooden indoor gears and cast-iron outdoor gears. Remains of the latter are plentiful around Castlecomer and in other places.

The authors write: “Horses, ponies and donkeys were commonly used to drive these churning gears. Dogs were used in Wales and on the continent of Europe but there is no evidence that they were used in Ireland.”

Apparently, the wooden gears were known as horse wheels and the cast-iron gears as horse engines. They powered dash-churns in the dairy.

Tommy Moore of Knockahonagh, Luggacurren, who was born in 1908, saw two churning gears in working condition on farms owned by his cousins Michael and William McGrath at Aughadreen, near The Swan.

As it walked around the churning gear, the horse at the same time tempered under his hooves the culm (anthracite dust) which was used as household fuel, Tommy recalled.

Some connoisseurs maintained that, due to the mixture of herbs and grasses growing on the damp soil, the colour and flavour of Castlecomer Plateau butter were superior to those produced on the lowlands.

Back to the churning process... seemingly it was important to have an older horse attached to the gears because it walked around at a steady pace and didn’t rock the churn, sloshing cream all over the place. A younger animal was inclined to go too fast at the start, prompting the call “Go easy, go easy.”

While researching their book, the authors came across an unusual if not unique manually-operated churning device on James Carpenter’s farm in Farnans, Co Laois. It was powered by means of a cranking handle mounted on an axle.

In the 19th century, the book tells us, salted butter was packed into firkins (small wooden casks) and taken to markets in the larger towns. For example, the Walshs of Graguenahown, Spink, who had 14 cows, sold butter to their customers in Abbeyleix as well as bringing firkins to the markets.

Then, as now, where money was concerned, precautions had to be taken. Carts travelled home in convoy as a protection against would-be robbers.

In pre-refrigeration days, there was, of course, a danger that butter would melt in warm weather before reaching its destination. Some used freshly-cut leafy grass to keep down the temperature.

Older people also often wax lyrical about buttermilk, an important churning by-product. Note the authors: “A drink of fresh buttermilk, with little blobs of butter floating in it, was not only a very refreshing drink on warm days, but it was considered one of nature’s health foods.”

In hardcover and beautifully presented with many pictures and illustrations, ‘Animal-Powered Churning Gears’ is a valuable addition to rural and agricultural history - a history that might never have been recorded but for the efforts of Messrs Conry and Coulter.