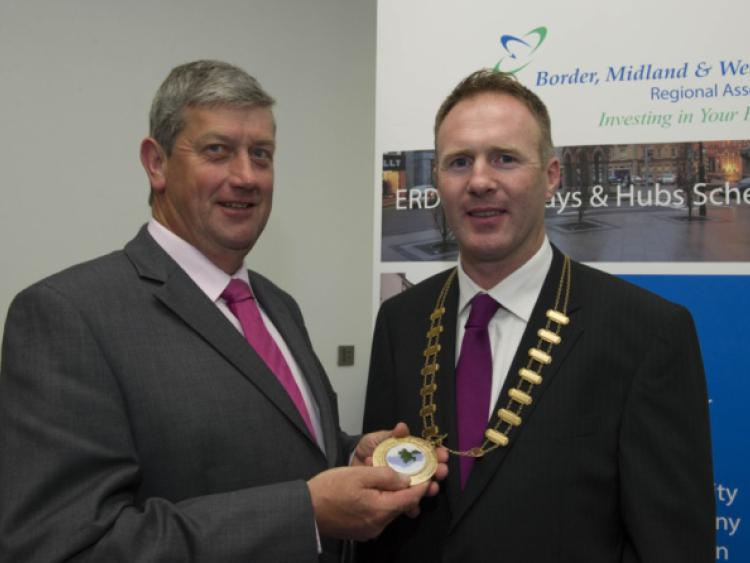 A Laois county coucillor is the new and final chairman of the body which overseas the spending of EU money in the border, west and midlands.

A Laois county coucillor is the new and final chairman of the body which overseas the spending of EU money in the border, west and midlands.

Cllr James Daly from Garryglass, Timahoe was been elected unopposed as the new Cathaoirleach of the Border, Midland and Western (BMW) Regional Assembly at their Annual General Meeting on Friday 12th July, 2013 in the European Commission Offices in Dublin.

Cllr Daly was first elected to Laois County Council in 1991 for the Luggacurren Electoral Area and has been a member of the BMW Regional Assembly and the Midland Regional Authority since 2004.

In accepting the position, Councillor Daly said that he was both honoured and privileged to be elected Cathaoirleach of the Assembly. He stated that as the 15th Cathaoirleach of the Assembly and the 3rd from Laois, he would be the last under the current regional arrangements, following the implementation of the proposed reforms, from 2014 onwards.

He said that it was important that there would be a smooth transition to the new regional configuration. Cllr Daly informed the meeting that the Assembly would be actively involved in reviewing the investment priorities for the BMW Region and in the finalisation of the new Regional Operational Programme for the 2014-2020 period.

Mr Gerry Finn, Director of the Assembly, congratulated Councillor Daly on his appointment and said that he looked forward to working with him over the coming year.

In February it was announced that 2014-2020 European Union budget negotiations in Brussels provided for a special case additional allocation of €100m to the BMW Region.