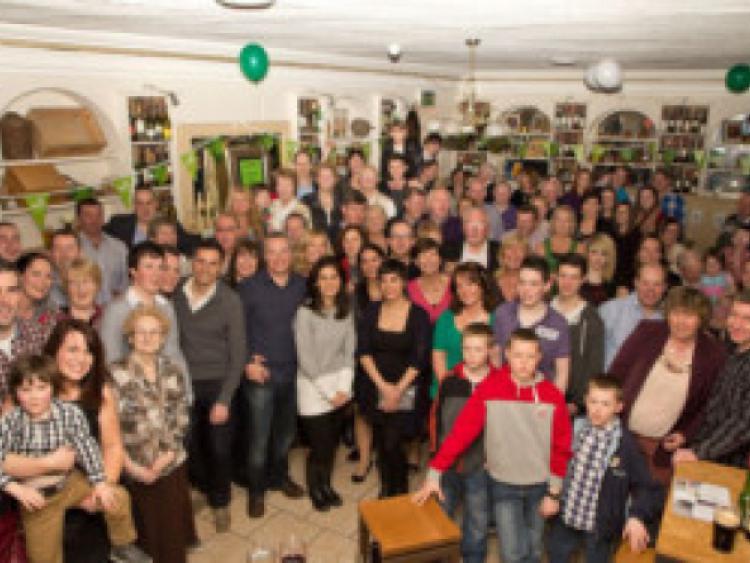 Descendants of the McCormack family from Green Road, Portlaoise, came from as far as Germany, Spain and England, to join with their Irish relatives, many still living in Portlaoise for the Gathering 2013 event.

It was an emotional night of chat, performance and fond family memories, stirred up by an evocative picture slideshow organised by Jacinta Allen, granddaughter of Mick and Margaret McCormack.

The oldest surviving son of Mick and Margaret at the reunion was 82-year-old Micheál ‘Weeshie’ McCormack who worked in the ESB and is now living in Athy.

Rosie and Peggy (Gretty) married and started families in England in the 1960’s - becoming Rosie Conroy and Peggy Sweeney before returning to Portlaoise. Peggy worked for a time at the Worsted Mills on the Abbeyleix road and was a popular member of their annual pantomime.

Youngest children Tommy and Charlie left for England in the 60’s to join the Airforce and Navy respectively. Tommy currently lives in Wales but was unable to attend on the night. Charlie returned to Portlaoise in the early 1990’s and now lives in the original family homestead.

Remembered fondly on the night were deceased family members. Seán McCormack, who sadly passed away in 2005, worked in the ESB all his life and was well known for his work organising the retired ESB workers social outings.

Another sad year was 2008 when the McCormack family suffered two more bereavements, Jim and Mary. Jim’s Post Office job took him and his family around the country before settling in Tullamore as Postmaster.

Mary McCormack married Mick Donoghue from Clonad, and lived in England for a time before coming back to Ireland to settle in Roscommon. Seán, Jim and Mary were proudly represented by McCormack and Donoghue family members on the night.

A surprise feature of the night were impromptu party pieces from great grandchildren. Lee Donoghue performed Irish Dancing and banjo. Amelie Conroy did her Irish Dancing and Conor Allen delivered a stand-up comedy routine. Peggy followed in her father’s tradition and offered a witty poem to honour the occasion. With three generations of catching up it to do it was a late night and a joyous one in O’Loughlins.