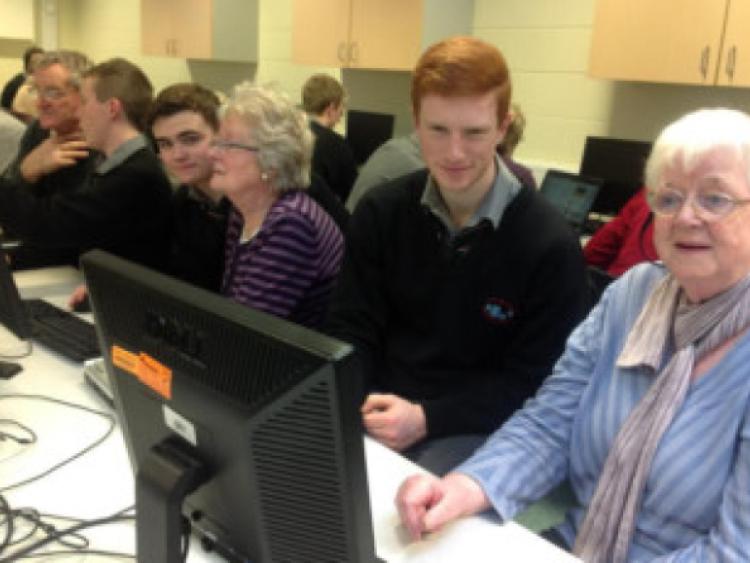 Over the past three weeks the students of St Mary’s CBS were privileged to help teach a fantastically enthusiastic group of Active Retirees.

Over the past three weeks the students of St Mary’s CBS were privileged to help teach a fantastically enthusiastic group of Active Retirees.

Niall Gavin and Niall Gleeson visited the Parish Centre as guests of the Active Retirement Group in order to entice the retirees to come to the school and engage on this student-led teaching course in order to hone their computer skills in a friendly and tea rich environment.

The CBS students who are in the programme found the experience very enjoyable. Straight away the boys and their ‘students’ were at full throttle going through their computer difficulties. The place was a hive of activity.

One of the aspects the students found interesting was how well the Active Retiree group was able to adapt and problem solve. The boys were also glad to see the enthusiasm,

No doubt the personalities of the Active Retirement group played a key role in the success of the programme, it wouldn’t have been so easy for the boys to teach without this. The CBS lads found great satisfaction in the knowledge that they had made a significant difference to how retirees performed on the computer while overcoming the stigma surrounding computers.

The student’s perspective on the programme was very positive. They found it very gratifying, the stories and conversations were very interesting and the group collectively learned a lot from this opportunity.

As for the retiree they found it very enjoyable, mainly because they got to learn more about the computer through one-to-one teaching rather than a class environment.

What they wanted to learn they asked, instead of the CBS students going through a routine about applications they already knew or had no interest in.

he Active Retirees thought the CBS students were a fountain of knowledge. Students showed them various sites that they wouldn’t have used or heard of before such as Twitter, YouTube, DoneDeal, RTÉ player and TV3 Player, they found the RTÉ Player and the TV3 player the most interesting websites as they were able to catch up on television shows they had missed, such as Fair City and Coronation Street.

The Students of St. Mary’s CBS not only taught the Active Retiree group how to use the computer, they also set up quite possibly the most efficiently run tea counter ever conceived. A huge drive from those involved in the tea counter to satisfy both students and Retirees alike, and not only did they do this, they had the courtesy to finish off the vast majority of the tea and biscuits themselves! Such a selfless mentality is hard to come by in the modern world!

We asked for their opinions on the learning programme and here are a few responses: “Outstanding lads, very patient with us”, “Very good lads, learned quite a lot” and “Very good lads learned quite a lot in three sessions. Would make good teachers.” Throughout the whole experience it was very positive and it was an outstanding three weeks of effort on both sides. The Active Retirees showed a substantial increase in their computer skills. CBS students were also enlightened by their experience, hearing stories about their lives and how school was many years ago and had had “great fun” teaching the course. The boys enjoyed the unique experience of teaching while still students themselves.

We would like to thank the Active Retirement Group particularly Trudy Nealon (the Organiser) for participating in this learning experience.