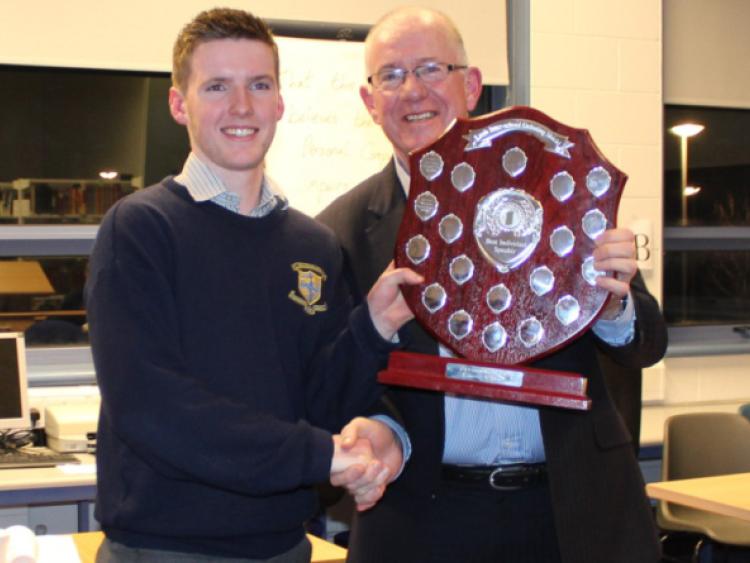 Portlaoise College pupils are the proud winners of the Laois Inter-Schools Debating Competition, which was held recently.

Portlaoise College pupils are the proud winners of the Laois Inter-Schools Debating Competition, which was held recently.

The team from fifth year defeated Colaiste Iosagain in the final to claim the title.

The night was a great success, with students from several schools in Laois taking home prizes.

Padraig Boland, Chairperson of the Youth Officers for Laois and Offaly, said that the standard shown by the participating students was “very impressive”.

The motion for the final was ‘this house believes that the personal computer impairs our quality of life’.

It was proposed with great poise and skill by the Colaiste Iosagain team of Naoise O’Dea, Gillian Daly, Mary O’Donnell and Jade Bennett. The opposing and winning team, however, was Portlaoise College’s Shannon Carroll Talbot, Dylan Gowing, Lauma Stale and Jack Kelly.

The Best Individual Speakers also did their schools and families proud, with a dizzying display of public speaking that had both the audience and adjudicators spellbound.

Shannon Ryan from Portlaoise College was the winner of the junior public speaking category. She spoke about ‘The Legacy of James Fintan Lawlor’, and she will go on to speak at the James Fintan Lalor Inaugural in September.

The judges on the night were Charles Flanagan, Michael Parsons and PJ Phelan, and they had the very difficult job in choosing the winners.