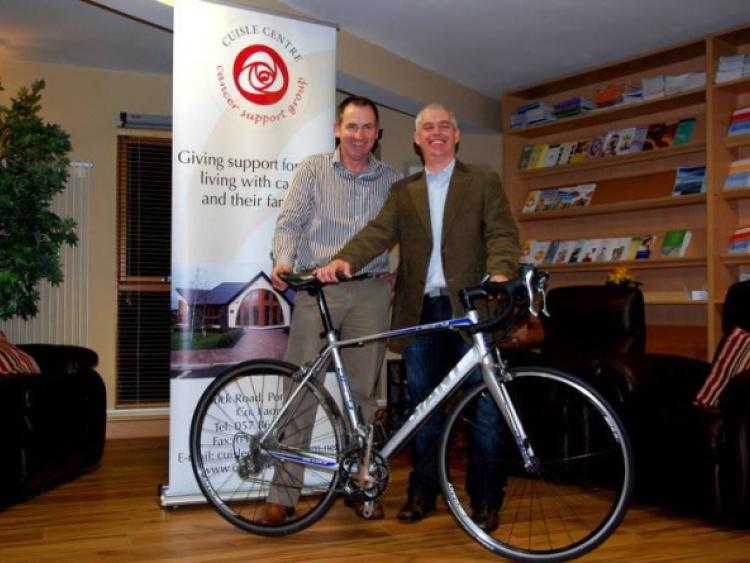 Portlaoise Prison officer Francis Rogers is preparing to leave his Tolerton home on his bike and cycle all the way to Rome, for the Cuisle Centre.

Portlaoise Prison officer Francis Rogers is preparing to leave his Tolerton home on his bike and cycle all the way to Rome, for the Cuisle Centre.

He represents Laois on the ‘Home to Rome’ charity cycle challenge. Next June 21, thirty cyclists will cover 2,000 km in a fortnight, crossing the Alps and the Apennine mountains, enduring40 °C temperatures.

Francis signed up two months ago after seeing an ad. A keen cyclist and a member of the officers Complex Cycling Club, he has upped his weekly distances from 200km to 300km, in preparation for the challenge, and launched his fundraising events on Friday November 1 in the centre.

“I need all the support I can get. I hope to raise at least €5,000 for Cuisle. Anyone I have spoken to is quite enthusiastic, but they also think I am a bit crazy,” he said laughing.

His wife Carole and three children are supporting him in his biggest challenge since he took up cycling last year.

“We got married in Rome and our fifteenth anniversary falls during the cycle, so hopefully Carole will be meeting me when I get to Rome,” he said.

All the cyclists will be raising money for their own local cancer charities.

“I have had a few colleagues who passed away from cancer, the Cuisle centre supported them, and their families too, so I thought it would be nice. Everyone knows someone affected,” said Francis.

It will cost him €1200 to pay for the trip, which he plans to raise through business sponsorship rather than using money donated by the public.

“I want to show to people that all the money fundraised will go to Cuisle,” he said.

The cyclists will have six volunteers backing them up in support cars, sleeping in tents at night.

Organiser Kevin Kelly from Carlow says hopefully they can keep the mosquitos out.

“Like Ryanair this is a no frills cycle and the cyclists will endure pain for 14 days, at least we will have a time limit on it, unlike the thousands of cancer patients when going through there treatment,” he said.