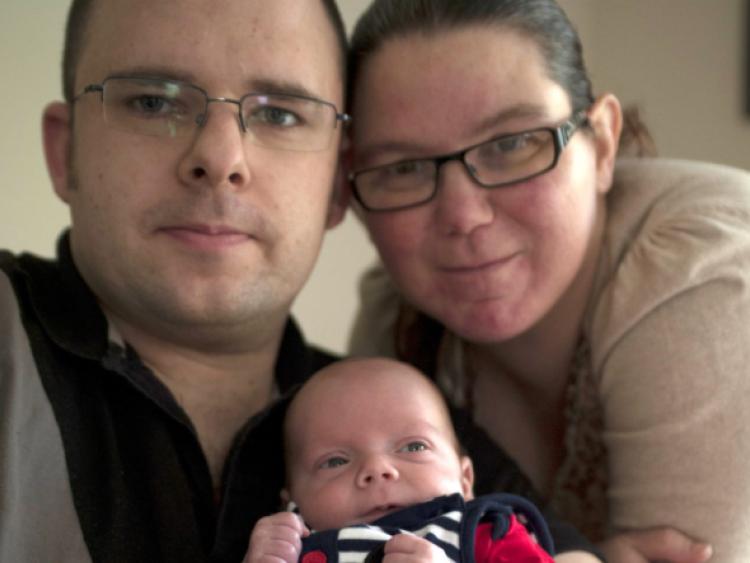 Emma O’Sullivan from Durrow suffered with kidney reflux from birth, and she had her first kidney transplant when she was just nine years old.

Emma O’Sullivan from Durrow suffered with kidney reflux from birth, and she had her first kidney transplant when she was just nine years old.

“I had my first transplant in 1988 and that lasted me eleven years. I was on dialysis then for eighteen months until I got my second transplant in 2001,” she told the Leinster Express.

Thanks to the gift of organ donation, Emma, who is now thirty five, was able to live a normal life through it all. On December 1 2013, she and her husband John welcomed their first child, Ewan, into the world.

“I would definitely encourage everyone to carry an organ donor card.

“I wouldn’t have been able to have my son if a donor hadn’t given me this opportunity.

“The doctors kept a close on me during the pregnancy, but I had no sickness at all. I flew through it,” she said.

Over the past number of years, Emma has actively participated in the European Transplant and Dialysis Games, as well as the World Transplant Games.

For now, all of Emma’s attention is focused on her three month old son, and she cannot emphasise how much the gift of organ donation has changed her life.

“If you would like to donate your organs, then please talk to your family about it. Let them know of your choice,” she said.

There are over 600 people in Ireland awaiting life-saving heart, lung, liver, kidney and pancreas transplants.

In 2013, a record 294 organs were transplanted to patients in need. 256 were as a result of the generosity of the families of 86 deceased donors, while the remaining 38 came from living donors.

The gift of organ donation has extended the lives of over 3,000 people in Ireland today.

Organ Donor Awareness Week takes place on March 29 to April 5. This week also serves as a fundraising exercise for the Irish Kidney Association, and all proceeds will go to towards aid for patients on dialysis and those fortunate enough to receive a kidney transplant.

The focus of Organ Donor Awareness Week is to raise awareness about the ongoing and ever increasing demand for transplantation, which relies entirely on the public for organ donation.

Families need to talk amongst themselves and keep reminders of their willingness to donate visible, by carrying the organ donor card, downloading the ‘Doner eCard’ phone app or permitting Code 115 to be included on their driver’s license.

Throughout the week, Irish Kidney Association volunteers will be distributing donor cards and selling forget-me-not flowers in towns and villages across Laois.