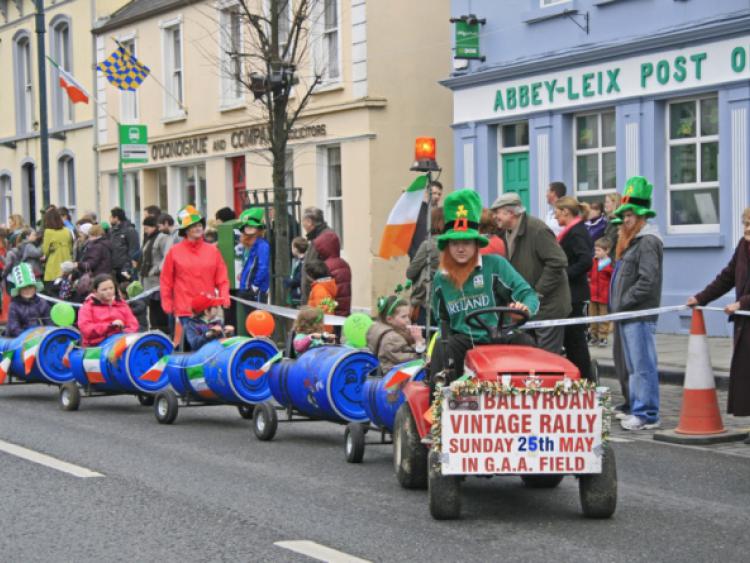 As well as the parade there were plenty of festivities around the town, with food vendors and people selling crafts at stalls.

The Ballyroan Brass Band also performed on the day bringing music to the square, and keeping the crowds happy before the parade began it’s trip down through the town.

The sun broke through the clouds for the afternoon’s festivities which this year saw a much bigger turnout of parade participants. The UN Veterans Association Post 27 from Portlaoise led the parade along with a piper. They were followed by maths loving Scoil Mhuire pupils and techers whose sign read ‘find a % of fun in every sum’.

The Jelly Tots creche and playschool had plenty of colourful revellers, with many of their younger participants dressed in green, white and gold. The Magic Movers dance group did some dancing in the square of the town and also stopped along the street to entertain the revellers.

Norefield Montessori were also kitted out in colour and had a lovely sign with lots of rainbow coloured handprints, showcasing the talents of the young participants. Also spotted among their troope were some wild animals - an elephant, a lion, a pig, a cow, a donkey and an owl.

The Irish Red Setters Club brought some of their dogs out for the day to say hello to the crowds, while members of Laois Down Syndrome who were also dressed in festive colours walked on behind them. First Ireland Spirits were celebrating 20 years in business in Abbeyleix and their staff also took part.

The Ballacolla ladies soccer team walked in the parade for the first time, having been formed in September last year.

Abbeyleix ICA also had a well decorated float - this year is a special one for the group as they are celebrating their 100th birthday.

Abbeyleix Social Services had a colourful display, as they marked 40 years of delivering meals on wheels in the locality. Friends of Abbeyleix Hospital had a float telling the crowds they are ‘still hanging in there’.

Abbeyleix Youth Together were also vibrant on the day, and the Abbeyleix CE scheme participated as well, advertising their facilities.

For vehicle enthusiasts, there was plenty on offer with displays from Ballyroan Vintage Club, Portlaoise Car Accessories, Abbeyleix High Nellies, Abbeyleix Vintage and Classic Group and from Raheen Vintage.