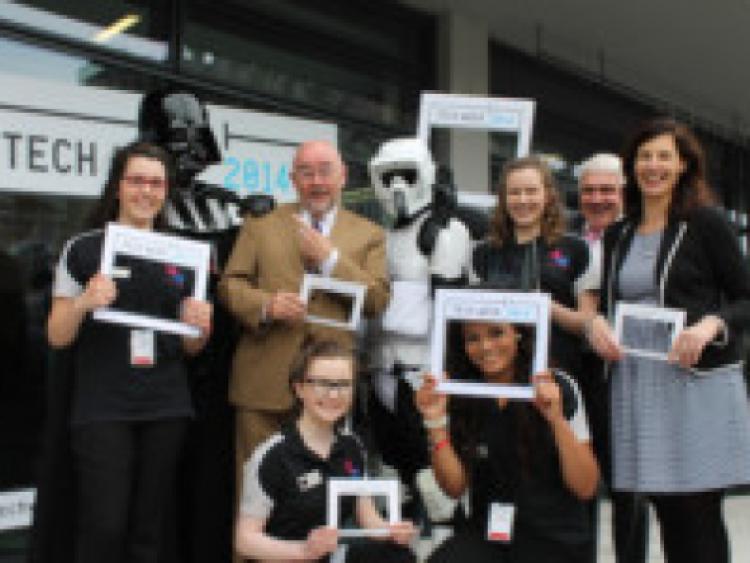 After months of incredibly hard work and dreams of Abu Dhabi racing around in their heads the two teams - Lombardi Racing and Team Cheetah- represented Scoil Chríost Rí in the national final of F1 in Schools in Dublin Castle on Friday May 2.

After months of incredibly hard work and dreams of Abu Dhabi racing around in their heads the two teams - Lombardi Racing and Team Cheetah- represented Scoil Chríost Rí in the national final of F1 in Schools in Dublin Castle on Friday May 2.

The two teams secured prime spots in the competition hall and set up the stands they’d spent months designing and building. Both teams presented their cars and portfolios to the scrutineers to make sure they fit the regulations of the competition.

Eventually the competition was officially opened and Lombardi Racing was up first with the engineering judges who were followed closely by the display judges.

Both sets of judges quizzed Team Cheetah shortly after.

The teams were asked about every aspect of their work, the building of the car, the design programs they used, the machines used, how they made their stand, what they chose as their innovation project, no stone was left unturned.

Lombardi Racing pulled out all the stops by choosing Women in Motor Sport and inviting one of Ireland’s greatest ever female rally drivers Rosemary Smith to Dublin Castle.

They also had Smith’s driving uniform beside their stand with everyone was very impressed. After the judges had scrutinised every aspect of their work, the teams got the chance to check out the competition before they were called before the panel of judges to give a five minute presentation on all the hard work they had done for the competition.

After the judging we finally go the chance to race our cars down the 20 metre track. Propelled by a CO2 canister, the cars reach 65 mph. We were delighted with the improvement in our time trial compared to the regional finals.

A lot of work had been put into designing the car to be as light as possible while still within the regulations.

Lombardi Racing and Team Cheetah competed to win the top prize representing Ireland in the world final in Abu Dhabi. Both teams did excellently on the day, with both winning awards.

Even though the chance to compete in Abu Dhabi remained just out of reach both teams did exceptionally well for their first time in the competition and represented Scoil Chríost Rí wonderfully.

Lombardi Racing would like to thank their sponsors for their support, especially Oriflame, Aidan O’Connell Engineers, RPA, Downeys, Fingelton White and Mochua Print.