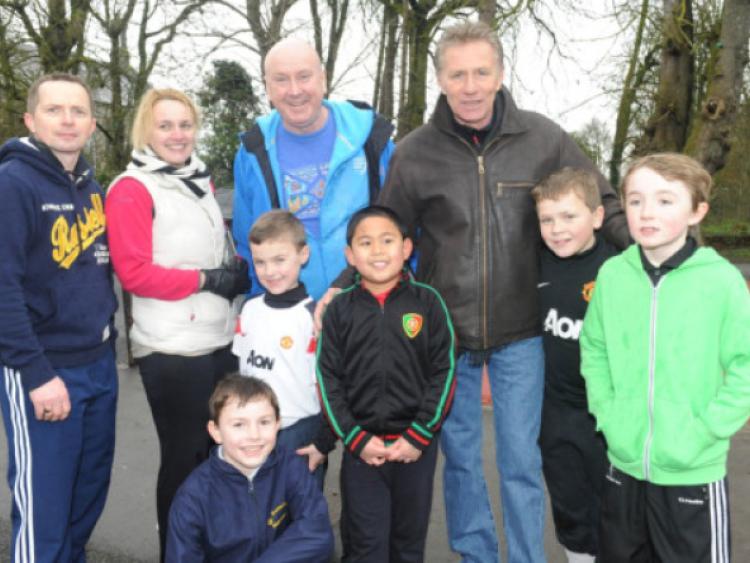 A VISIT from Minister for Education, Ruairi Quinn may be in the pipeline for St Paul’s Secondary School, as talks continue over the transfer of a site for a new building for Monasterevin.

A VISIT from Minister for Education, Ruairi Quinn may be in the pipeline for St Paul’s Secondary School, as talks continue over the transfer of a site for a new building for Monasterevin.

That’s according to Senator John Whelan who brought Senator Eamon Coughlan to his hometown last Friday March 22 to deal with the lack of recreational and sports facilities as well as promoting healthy lifestyles.

At St Paul’s Secondary School, Sen Whelan recalled fond memories of being part of the first Leaving Cert class in 1978. However, another issue which has been on the agenda for more than ten years came to the fore.

“I have been working along with Jack Wall to try and bring to a close the whole saga of getting a new building for St Paul’s Secondary School,” he said.

Sen Whelan said a site had been identified but talks were at a sensitive stage. He pledged to work hard to ensure the project proceeds.

“I know the existing school is bursting at the seams and it had very modest facilities,” he said.

Following a press release issued by Deputy Sean Fleming earlier this month, the Moore Abbey estate was mooted as the proposed location of the site, however, this has not been confirmed.

Sen Whelan pointed out that St Peter’s National School, which he also attended when it was a CBS, had changed very little in terms of the infrastructure. He said the school had to contend with little space for recreation and sporting facilities. Despite these limitations, he noted the pupils were well on their way towards achieving the Active Flag.

He said the amalgamation of the two primary schools on a new site was something which was being looked at, and there were more facilities available in Monasterevin when he was growing up in St Evin’s Park than today.

“We had community games, Ros Glas started up, pitch and putt and a basketball court, but then the council came and built houses on it,” he said.

He explained the senators also met with a local group spearheaded by Ger Melia who are trying to build a recreational facility on a seven and a half site behind St Evin’s Park.

St Paul’s principal, Brian Bergin said they had their fingers crossed the site talks would come to a successful outcome soon. He said there are over 300 students enrolled.

“I have small classes taking place in my office at this time of the year because there is no space, because of exams the teachers often have to take the pupils in smaller groups,” he said.

Meanwhile, Sen Eamon Coughlan talked to the students about his career, his defeats, his victories and how they made him a better person. He also met with the Monasterevin Youth Group who carried out a survey to determine the needs of young people in the area. Up to 70 members of the running club then set off on a run, which was started by the legendary athlete.

“The visit went really well,” explained St Peter’s National School teacher and Active Flag co-ordinator, John Cullen, “We are working towards achieving the Active Flag, and he said when we get it, he would come back and launch it.”

The visitors dropped in to visit Sen Whelan’s mother, Anne, who still lives in St Evin’s Park, to top off the visit with a cup of tea.