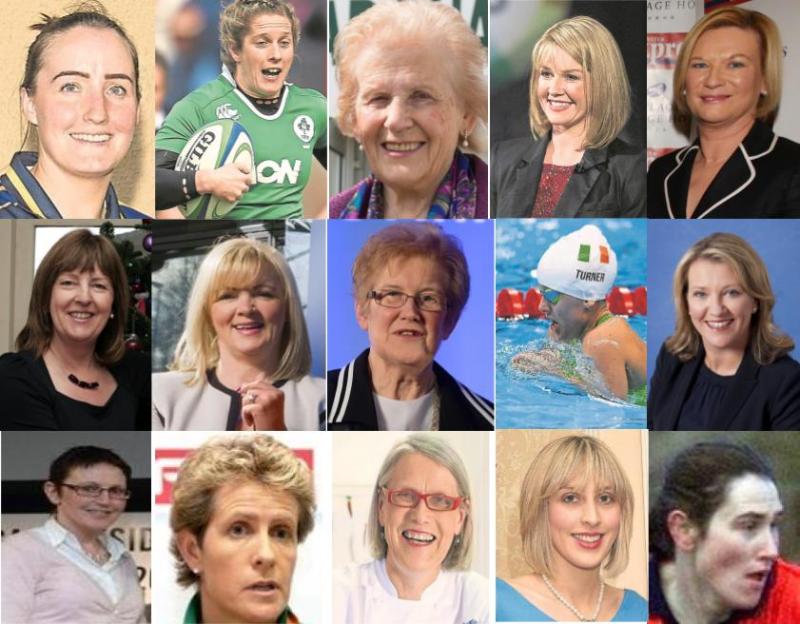 Laois women past and present have stood tall in the fields of sport, business, farming and media. While celebrating each woman's successes, we ask who is top of your list?

From a teenager to Ireland's favourite octogenarian, Laois women past and present have made their mark in Ireland and internationally, particularly in the past fifty years as equal opportunities improved for women.

Be prepared for surprises when you realise just who is from our fair county, and just what influence some of those women have.

Other than your own mammy naturally, who is your favourite Laois woman? Vote in our poll below.

For nearly half a century, Anna May McHugh, from Ballylinan, has been the driving force behind the National Ploughing Assocition's Ploughing Championshops. Appointed Secretary in 1954, Anna May, was appointed NPA's managing director in 1973. She is a past Leinster Express Laois Person of the Year and in September 2015, Anna May was awarded the Officier de l’Ordre du Mérite Agricole by the French Ambassador to Ireland Mr Jean-Pierre Thébault. Anna May is the Irish Board Member to the Board of the World Ploughing Organization, where her daughter, Anna Marie McHugh, is now General Secretary. Anna May has brought the 'Ploughing' home to Laois on a number of occasions the most successful of which was a three year run in Ratheniska from 2012-14. The event is now the biggest outdoor event in Europe.

Born Darina O'Connell in Cullohill, south Laois in 1948, Darina is famed for her television cookery programmes and cookbooks, as well as her smiling no nonsense approach and vivid glasses. She owns Ballymaloe Cookery School in Cork, and is a leader of the 'slow food' movement in Ireland. She has won many awards including the 2001 Veuve Clicquot Business Woman of the Year, and 2005 Cooking Teacher of the Year by the International Association of Culinary Professionals. Her daughter in law is another TV chef, Rachel Allen.

One of the best athletes Laois and Ireland has produced, Anne competed in the 3000m at the 1998 Olympics in Seoul, finishing in 24th place. She also won a bronze medal in 2002 as part of the Irish team at the World Cross Country Championships, but perhaps what was most impressive about her was her longevity, and the incredibly high standards she maintained for so long. She also went on to act manager to Irish Cross Country teams for six years.

Born in 1975 in Mountrath, Claire attended the Brigidine Convent and then studied journalism in Rathmines, before fast rising to the top in media. She is now one of RTE's top current affairs journalists, with her own show Claire Byrne Live, where she can cut to the chase with politicians, as well as interviewing the public on their personal experiences. She is married and expecting her third child.

An iconic figure in Laois sport, perhaps her greatest legacy is that she continues to inspire people long after her untimely death in 2007. Another All-Ireland winner in 2001, she had also won an All-Star as goalkeeper in 1991, and was one of the key members of that 2001 team. Having been diagnosed with cancer, she bravely fought the disease to make a return to the playing fields with her beloved Timahoe. Refusing to step away from football, she joined Pat Critchley as a selector, and remained with the team right up until the her health would no longer allow it. A true inspiration.

From Clonaslee, Evelyn was born in 1964, and has a bachelors degree in physics and mathematics, and a masters in physics. She is Deputy Head of Forecasting at Met Éireann, Secretary of the Irish Meteorological Society, and an RTÉ weather presenter since 1988.

While technically a Dubliner, born there in 1958, Eileen is an honourary Laois woman as the RTE Nine O'Clock news anchor has never forgotten her Laois roots. Her late father Mick Dunne, the sports journalist and RTE GAA commentator, was from Clonaslee. Eileen regularly returns to support Laois events, including the Leinster Express Person of the Year Awards, as well as charity walks, recently chairing a meeting on the future of Laois Hospice.

From Ballylinan, Sharon became CEO of the Irish Hospice Foundation in 2011, and is working towards the establishment of the first Midlands hospice. She lives on the Heath with her family. The first CEO of the Crisis Pregnancy Agency, she also has 15 years senior management experience as Director of Health Promotion in both the East Coast and Midlands Health Boards.

From Rossleighan, Portlaoise, Heidi studied at Ballyfin college and in Abbeyleix FEC, and graduated from NCAD in 2008, introducing her own label a year later, creating chic and contemporary women's clothing. She sells in top boutiques and has a flagship studio and boutique in Portlaoise. She is now one of Ireland's leading award winning fashion designers, and last Christmas eve gave birth to baby Matilda in Portlaoise hospital.

Like Sue Ramsbottom before her, Tracy Lawlor from Emo is one of the best footballers of her generation, and gave outstanding service to the Laois ladies team. Won an All-Ireland in 2001, four All-Star awards, Leinster finals, club championships, leinster club championships, the list goes on. She won nearly 40 major honours with club, college and county.

A current star of the Irish Womens Rugby team, the Ballickmoyler already has one try to her name in the current 6 Nations campaign, and has been one of the country's best players for some time now. All the more remarkable was that she took up the game late, and quickly progressed from play with Portlaoise, to Connacht, and then to Ireland. Won 6 Nations titles with Ireland in 2013 and 2015, plays international Sevens rugby with Ireland as well, and scored an outstanding try in Ireland's defeat of the New Zealand at 2014 World Cup.

Louise Phelan is from Donaghmore, one of 17 children from a staunch Fianna Fáil family. She is the vice-president of global operations for PayPal in EMEA, leading more than 2,600 people based in Dublin, Dundalk and Berlin. She joined PayPal in 2006, having previously been a member of the management team at GE Money. She trained as a nurse. She is the first woman to receive the prestigious Sir Michael Smurfit Business Achievement Award, in recognition of her work to secure 1,000 new jobs in Ireland during the economic slump. She has been named in Siliconrepublic.com’s list of 25 people influencing Ireland’s fintech revolution.

The youngest member of the list, swimmer Nicole from Portarlington came to national prominence last year when she qualified for five finals at Paralympic Games in Brazil. Still just fourteen years old, she has established herself as one of the elite para swimmers in Ireland, having won three medals at the World IPC finals in 2016. A student in Colaiste Íosagáin Portarlington, she has her sights firmly set on representing Ireland once again at the 2020 Paralympic Games in Tokyo.

Mary Wheatley's involvement in Ladies Football stretches across every level of the Association starting as it did with her club Crettyard before advancing to occupy the highest position as overall Association President between 1988 and 1991. Mary has also been heavily involved at Provincial level. A member of Fianna Fáil, in 1985 she became the first woman to be elected to Laois County Council and was the first woman Cathaoirleach.