Laois is home to an innovative new plastic recycling factory that aims to melt waste wrappers into wax for everything from aeroplanes to facecream.

Portlaoise Parish Priest Monsignor John Byrne blessed the plant and its workers at the launch.

Minister Flanagan said it was an important day for job announcements for Portlaoise.

"The challenge we had in this town for many years was, we were very good for bringing people to jobs, 14,000 people leave this town every day to work elsewhere, the vast majority in Dublin. In recent times we are concentrating on flipping that around," he said.

"Plastic waste is a scourge on our planet, and a threat to public health. I'm delighted that here in this storehouse in Portlaoise, a practical way of doing something about it," he said.

Trifol has 15 staff and will go into production in coming weeks, with another 15 or so skilled engineering and electrical workers expected to be needed by the end of the year.

The unit is in Clonminam in Portlaoise, in the former Cynar factory, a plastic recycling plant that turned plastic into diesel.

A former director of Cynar, Pat Alley from Durrow, is behind the new business.

"Today is the commencement of our commissioning of the plant. That will take an approximate two weeks, to be in full production. We have a strong dedicated team of employees who manage the plant. I am pleased a number have come back and rejoined, most are proud Laois men today," he said.

He welcomed shareholders and said they are in advanced discussions with more investors in Ireland and the UK eager to invest.

He wants the government to invest to build a 15,000 tonne per annum capacity factory on site for phase II to cost €5 million.

"We want to create a centre of excellence in Portlaoise, to train up young engineers, accountants and operators, all multilingual, to establish a business here with a global outreach. I make gentle representations to the Minister to seek government support. We have done everything so far through private equity investments, we have had no support either nationally or from the EU," Mr Alley said.

The technology involves heating shredded soft plastics like baling wrappers and food wrappers, to 300 degrees until it turns into gas, and is then converted into high end wax, a commodity that is now high in demand.  It also produces gas which in turn is then used to heat the zero emissions closed unit. Patents are pending on the technique. The only byproduct is char, a carbon dust from 1 to 2% of the materials.

Each tonne of EnviroWax produced removes 1.5 to 2.0 tonnes of plastic waste from the environment. Additionally, Trifol can also produce wax ingredients for the production of synthetic lubricants which are replacing traditional mineral oil lubricants.

The plant may take in plastic from abroad as well as from Irish waste.

Below: Minister Flanagan with Trifol's CEO Daire Gilmore and Executive Chairman Patrick Alley viewing the waste plastic to be converted on site. 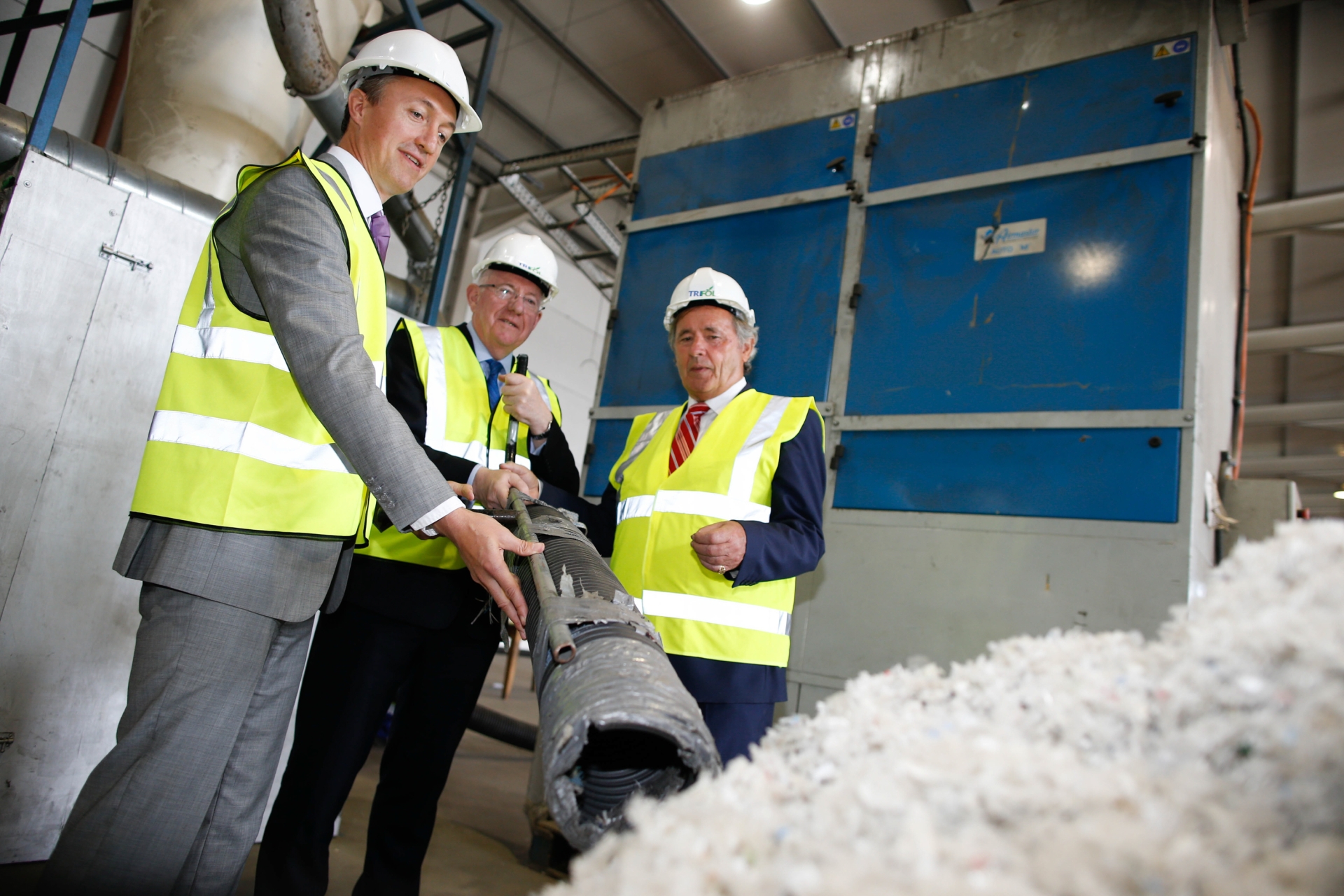 Daire Gilmore the CEO said that plastic production will grow despite its damage to the environment.

"We see plastic doubling in capacity over the next 30 years. It is here to stay unfortunately," he said.

One of the staff is Ciarán Mulhall, an engineer from Portlaoise who was working on contract for Intel.

"It's a big difference from an hour's commute to five minutes. It's a great opportunity. I never had a job in Laois since I was a teenager because there was nothing for me In Laois. I worked in Kilkenny, Tipperary, Kildare, there were no job opportunities until now," he said.

The company is partly funded by public crowdfunding through SparkCrowd. 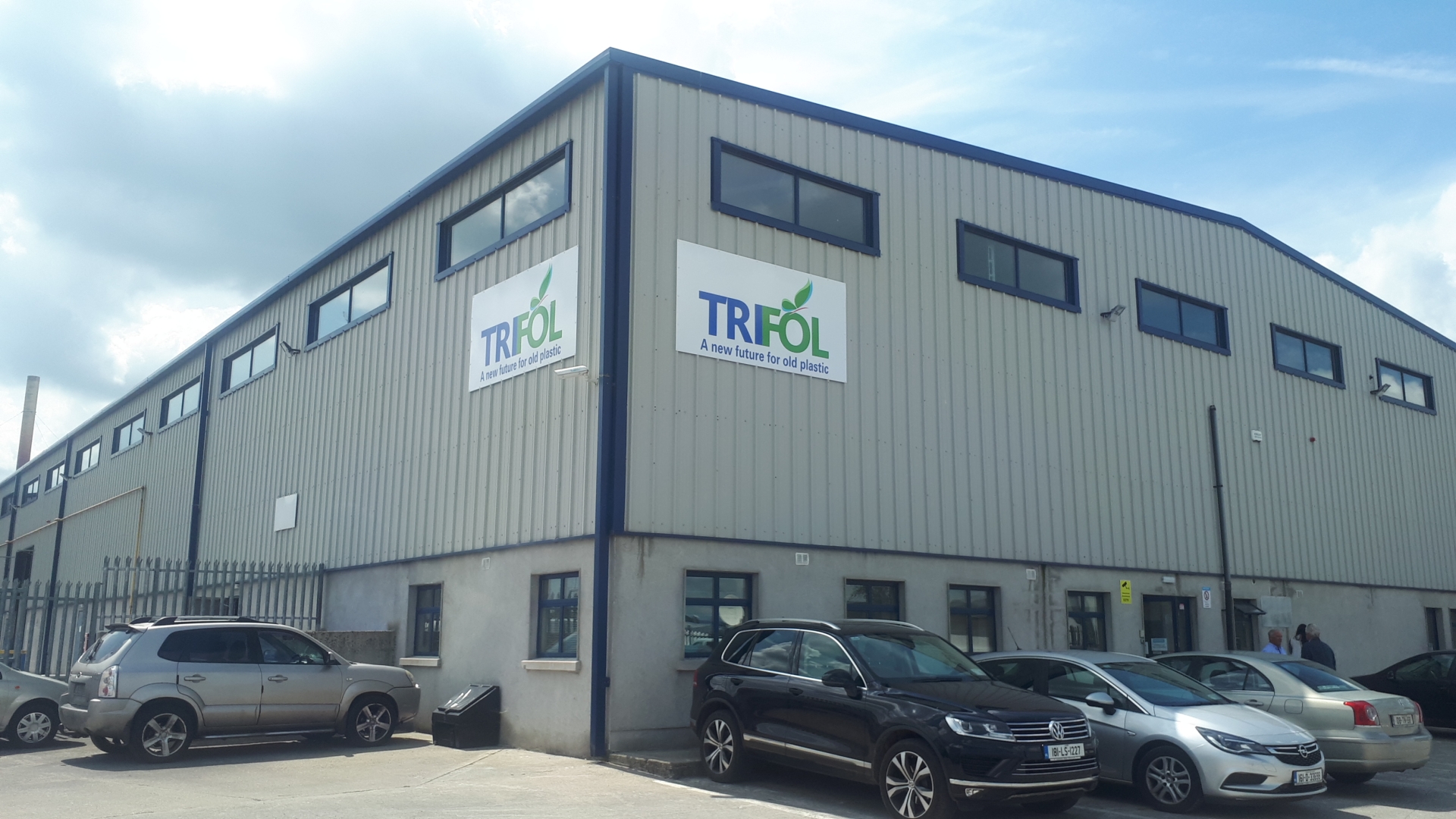